I trust everyone enjoyed my little role-play session with Fallout: New Vegas, although some people asked where the actual review of the game was. Well, that should have been fairly obvious: the review of New Vegas has actually been up for some time, under the name of Fallout 3. Yes, the settings and stories and all that were different but basically I knew I had to do something drastic or the two reviews were going to end up sounding eerily similar.

Truth is, the state of gaming has been making me more and more depressed lately. It seems like every week I’m having to buy more than one game because the first one I picked up turned out to be far too uninteresting or too much like a previous instalment in the series (for we are in the eye of the sequel storm right now) that I had to kick it in the head and find something else worth talking about before I lost too much of the week. Recently I went through this process with New Vegas, Vanquish, Fable 3, then finally back to New Vegas once I came up with the role-playing thing. Perhaps this is nature’s way of telling me to start trying to like other genres again. Maybe I’d get really into Civ 5 if I tried. I have been known to get into Doodle God, ‘cos it’s basically just your average 90’s point-and-click adventure game boiled down to its most basic element.

But I digress, I wanted to talk about role-playing. Role-playing is something that has existed in various forms since some average Julius in ancient Rome gazed with envious eyes at his neighbour’s villa and wondered what it would be like to be someone else. There will always be role-playing as long as someone, somewhere in the world is dissatisfied with their position and status in life. Even if you did manage to make a universally happy utopia there’ll still be someone who secretly longs to be a six-breasted double-cocked anthropomorphic dolphin wizard.

I’m not quite that far gone but I am keen on role-playing. Since I’ve got a decent income, a fulfilling creative career, actual friends and women who spend time with me without any need for money to change hands I don’t feel the need to escape my glamorous life by role-playing as hard or as often as some of you hopeless losers, but the knowledge that I am not, in reality, a wizard does sometimes hang heavily on my expensive, fashionable hat. So if a live-action role player or a 24-7 World of Warcraft enthusiast is mainlining Dutch heroin while wedged between a wall and the bowl of a public toilet, then I’m more of the casual marijuana user who might drop LSD out of curiosity then deny it to the judge. So I always insist on reading out the flavour text when playing Arkham Horror with my friends, sometimes while trying to sleep in bed at night I pretend I’m in a cryo-pod on a spaceship in the far future, and every now and again I’ll try to get really, really into an RPG or open-world game.

This goes back some time. I’ve mentioned before how I used to like playing Frontier: Elite 2 while rocking back and forth on my chair to simulate banking and making wooshing sounds with my mouth. Many years ago when playing the first 2D Grand Theft Auto I’d spend time role-playing as a law-abiding citizen attempting to have a relaxing Sunday drive following the rules of the road and not harming a soul. Which got a little disheartening when pedestrians would scream and flee for their lives because I’d pulled up at the lights three feet away. The point is, everyone wants to roleplay a little bit. Make an open-ended game immersive enough and players will make their own fun. 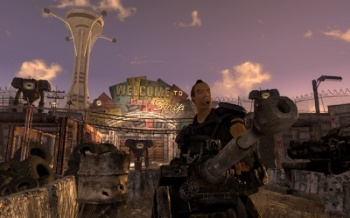 The problem with Fallout 3 and its spiritual predecessor Oblivion is that I’ve never really been able to get a sense of immersion from them. Partly it’s because they’re ‘big picture’ rather than ‘fine detail’ games. A city looks rather awe-inspiring when viewed from a distance, but once you get in for a closer look you find all its custodians staring at walls and drastically shifting personality from dialogue line to dialogue line. The attempts to make characters appear to act spontaneously just come across as wooden and unnatural. But for the purposes of this column I think the main problem is with the fast travelling.

If you went out of your way in Oblivion you could acquire a horse, but Fallout 3 just leaves you to hike. Which is slow and boring no matter how many giant scorpions you sprinkle on the road along the way. So obviously there needs to be a fast alternative, which in this case is the ability to click your heels together and teleport to any location you’ve been to before. And that spoils the experience for me.

I’m of the feeling that World of Warcraft is, on balance, a force for evil in the world today, but I can admire its design just as one could admire the efficiency of Nazi Germany. I like how its fast travel system is an unskippable journey through the land on the back of some mystical beastie, because it’s both a faster option than walking and allows the world to keep a tangible sense of bigness. Yes, I know, mages can create instant teleports to cities, but that’s a specialised option. In fact, when I played a mage, I used to hang around the cities selling teleports to non-mages for one gold each so I could eventually afford my own horse. Screw your world-saving quests, Blizzard, I can make money my own way. I was role-playing as the anti-hero of some 18th century picaresque. Now go look up what that word means.

When you instant fast travel in games like Fallout 3 you miss out on the adventure. If you had to ride a horse or a motorbike to your destination you might have an exciting encounter with NPCs, or catch a glimpse of something so intriguing on the horizon that you decide to take a detour to investigate it on a whim. Surely the whole point of the sandbox or open-world model is to give the player the chance to fill the gaps between major events with adventures of their own.

In an attempt to boil this down to a manageable, understandable rule to keep in mind, I’m of the opinion that a good open-world game should feel like you’re playing some kind of TV adventure serial, like Monkey Magic or the various incarnations of Pokemon. There’s an overarching story and fixed events on the trail of the overall quest that the heroes are always going to be moving towards, but in between the major events come shorter, episodic adventures as the protagonists stumble upon distractions. Like stopping to defend a village from bandits, or follow the trail of a secret treasure, or napalm a school building and pour the ashes of the children over their erect, twitching knobs for sexual release. Or does that only happen in the TV shows I watch?