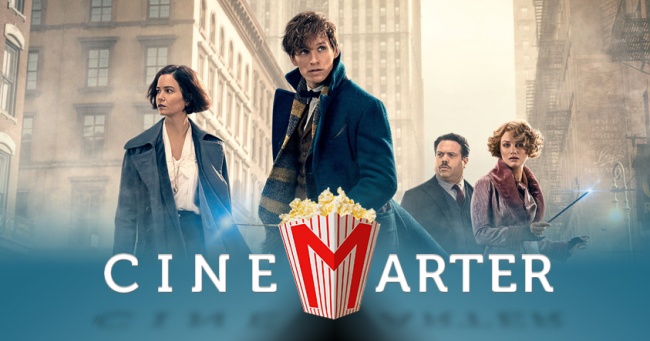 What do you do when your multi-billion dollar franchise comes to an end? Find a small textbook that was featured in one or two of the movies and base a spin-off franchise around it. In this case, it was Fantastic Beasts and Where to Find Them, of which you can actually buy a physical copy. It’s just over 100 pages, and mostly just describes a bunch of magical creatures. It was, after all, a textbook in the Harry Potter universe – it didn’t contain a narrative.

Largely because of that, this first Fantastic Beasts and Where to Find Them movie feels a lot like Harry Potter fan fiction. Granted, it’s been written by the author – J.K. Rowling wrote the screenplay – but that feeling permeates in spite of that fact. The movie is for three people: (1) those who want more Harry Potter regardless of the form in which it’s delivered; (2) those who are interested in the magical creatures found within the Harry Potter universe; and (3) those who wanted to learn what the magical community in America was like in the years just before the Great Depression. 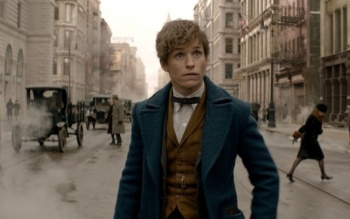 The plot boils down to “creatures get loose and our heroes need to find them before they cause irreparable damage.” There are a couple of subplots, and the real danger comes from something else, but it’s really the simplest setup one could have. The protagonist is Newt Scamander (Eddie Redmayne), who will go on to write the eponymous textbook. He comes to America for reasons that don’t actually matter, but soon enough magical creatures escape from his briefcase. A member of the wizarding police, Tina Goldstein (Katherine Waterston), eventually teams up with him in order to track the animals down. Also present: Tina’s sister, Queenie (Alison Sudol), and a muggle, Jacob (Dan Fogler).

Oh, sorry, he’s a “no-maj.” See, in America, they’re not called “muggles.” Why? Doesn’t matter. It’s different and needs explaining! Much of Fantastic Beasts is dedicated to explaining the wizarding differences in America or the creatures, or this new thing, or that old thing (for new viewers). And some of this exposition is so awkwardly delivered that you stop and wonder if you’d be better off just reading the textbook or any given Potter Wikia page.

For example, the Jacob character tags along only so that characters who know everything already have a reason to tell the audience. That’s a well-worn trope, and there’s nothing inherently wrong with it. The problem comes with the film attempting to justify it to us. Jacob asks at one point why he’s allowed on the journey, and the characters have to pause for a second before one sheepishly replies “Because I like you. Because I’m your friend.” Except that he didn’t and he wasn’t before the journey actually progressed.

Fantastic Beasts and Where to Find Them is Harry Potter fan fiction that was written by the author and delivered to us in the form of a feature-length movie.

Fantastic Beasts is also hiding a big secret, which it wants to reveal as this massive twist at the end. It foreshadows it to the point that if you can’t figure it out beforehand – hint: the juxtaposition of the first two shots of the film – you aren’t paying attention or might be watching your first movie. The revelation is disappointing not only because it’s so easy to figure out but because it’s a reminder of where this spin-off franchise is heading, which is a slightly more detailed recollection of events we’ve already heard about in these movies.

Are there positives? Sure! Most of the beasts are well-designed and rendered with solid special effects – although there is some dodgy CGI in the film, particularly with the background . The non-Newt characters are fairly interesting, even if the only one developed well enough is Tina. The “chase the creatures” adventure easily passes the time. The subtext of persecuted minorities … exists, but isn’t really explored in enough detail. Much like most of the Potter movies, even if many of the individual elements struggle to hold up, the film as a whole overcomes them to be a passable-at-worst experience.

But let’s talk about Newt. The character himself admits that he’s annoying. He is, but that’s not the whole problem. Eddie Redmayne is. Yes, he won an Oscar. That Oscar might also wind up in the same category as Halle Berry‘s. Redmayne is emotionally void, pathetically awkward, and has several odd, distracting, and annoying tics that do nothing for the role. As our protagonist, he’s underdeveloped and uninteresting. You know what makes for a better movie? Following Tina around as some sort of wizarding police. Not playing “magical Pokemon Go” with the lonely know-it-all from the back of the room. And it would have more sequel potential!

Fantastic Beasts and Where to Find Them is Harry Potter fan fiction that was written by the author and delivered to us in the form of a feature-length movie. It’s unnecessary, expository, and apparently only a building block, the filmmakers are planning (at least) four more of these things. Many of the individual elements don’t work, but similarly to other Potter films, the film as a whole is entertaining enough to overcome them. It’s not a great movie by any stretch, but if you want more of this universe, it will suffice.

Bottom Line: Decently entertaining, but definitely better than the sum of its parts. Fantastic Beasts and Where to Find Them is just good enough to be worth a watch.

Recommendation: Potter fans will want to see it right away. But to anyone who goes to see it at the theater: skip the 3D.