How much change can go into the new Fantastic Four movie before it stops being an adaptation – and does that even matter?

You’d think that in this age of so much media being adaptations of properties from various other media, “popularity” would be an easy thing to ascertain: Look up whatever makes the most money or has the highest consumer-awareness rating and make a movie out of it. But in Hollywood, where fortunes have been made off of dime-store books no one had ever heard of and lost on “sure things” starring the biggest actors on the planet, remains wary of playing strictly by the numbers. Instead, a unique alchemy of numbers, “analyst” input and (most powerful of all) the personal/professional biases of executives gets to tell the tale.

That’s why, when Tim Burton’s Batman hit huge in 1989, studios rushed to capitalize on its success not by quickly setting up movies based on Spider-Man, Wonder-Woman or even Superman but instead by hurriedly ordering big-screen updates of… 1940s comic-strip and radio-serial heroes like The Shadow, The Phantom and Dick Tracy – “comic heroes” older executives remembered had worked on film before (Batman, too, had been a 40s serial hero – a viewing of which at a Playboy Mansion party is said to have inspired the making of the Adam West TV series.)

This goes part of the way to explaining why The Fantastic Four is still considered a hotly-contested media property. Granted, in a world where Rocket Raccoon and Drax the Destroyer are the leads in a box-office topping smash, anything from the Marvel Comics canon is now considered a hot item. But FF was bought by Fox (and subsequently made into two initially-popular but now largely forgotten features) in the days when Marvel was desperate for any deal it could make, over properties like Captain America, Thor and Iron Man now considered billion-dollar icons.

But even then (i.e. the early-2000s), Fantastic Four wouldn’t have looked like a comic you’d scramble for the rights to: The books haven’t sold particularly well in decades (even during periods where it’s writing/artwork were critically-acclaimed) and the closest thing it has to a “hook” – its heroes are named/powered more like the fixtures of the 1950s scifi/monster pulp yarn than conventional costumed adventurers – hasn’t been novel since it debuted in the 60s. Their overall presence in the rest of the Marvel Universe, even, often seems less to do with their actual stature than to elements of their mythos (the “unstable molecules” handwavium, villains like Galactus and Doctor Doom) that quickly bled into everyone else’s books. So what’s the appeal (to studio decision-makers, fans or both?)

They’re recognizable, basically. Like Wonder Woman, they’ve spent decades being “name” characters whose historic importance (they were Stan Lee and Jack Kirby’s first superhero collaboration, generally-credited as both the “rebirth” and modernization of the genre) and pop-visibility (they’ve had a slew of cartoons and almost-innevitably pop up in the ‘toons of others) far outpaces their on-the-ground saleability. To the degree that most audiences know the name “Fantastic Four,” they know it means a Marvel superhero team – and now, more than ever, that should mean something you can sell without having anything else familiar to offer. 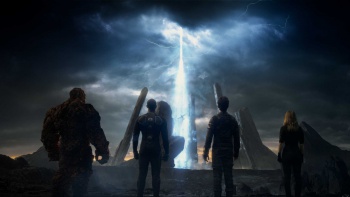 Again, that’s something that’s said about every Marvel property these days: “At this point, you could call any movie “Marvel’s ________” and get a smash hit!” But Fox’s new Fantastic Four movie seems poised to put that logic to a test, as the studio – after hiding any trace of the film from public view for over a year of production – has finally opted to tease the film via a trailer that features a lot of striking imagery… but effectively nothing that might indicate that it’s a trailer for The Fantastic Four.

That’s not necessarily a criticism (my criticism of the trailer would be that in deliberately aping the better-than-the-movie Interstellar trailer it ends up reminding me more of the Transcendence trailer,) but it does place the film in an exciting position. Not a position of likely being any good, mind you. Advance word, coupled with the studio’s insistence on hiding it (do NOT believe for a moment that a neophyte like Josh Trank has the clout to ask a studio not to market a massive tentpole like this) makes it sound like a miss just waiting to happen. But this will be the first “superhero” movie in a long time that’s bound to ignite the unanswerable debate over fidelity of adaptation.

That wasn’t always the case: Comics fans once accepted that their heroes would land onscreen looking barely like themselves, and that their best bet was to cling to good action scenes and interesting dialogue while hoping for a handful of familiar visual references. But now is the age of the Marvel Cinematic Universe, where heroes and their stories arriving onscreen looking like a live-action splash-page is now the expected norm. FF, according to its director, is aiming for something different: The broad iconography of the books (names and powers, mainly) refitted into a science-gone-wrong character piece.

That sounds interesting, at least. But it invites the question of how much change can go into an adaptation and have it still BE an adaptation. To break Respectable Critic Decorum and stoop to a food metaphor; if you take away the cheese, the crust and the sauce, then serve the remaining pepperoni atop a bowl of ramen… can you really still call it “pizza?” Fantastic Four has jettisoned not only surface material like the characters’ iconic blue uniforms and jaunty Space Age Adventurer optimism, but also their origins, backstories… rumors even heavily suggest that the franchise’s most beloved secondary element, the supervillain Doctor Doom, has been completely revamped from the ground up.

At that point, why is this even still called “Fantastic Four” apart from branding? And if it’s good on its own merits, does it still fail as an adaptation, and does it matter? And then there’s the question looming large on Fox’s mind: Does it matter versus the indifferent wrath of fans who not only aren’t hurting for “accurate” superhero movies but are also acutely aware that the prospective failure of this one just gets them closer to a hypothetical “proper” version from Marvel at some point?

My own sense is that it’s too early to tell, but just based on this trailer, I doubt I’d be excited no matter what they called it. Overly-familiar and dour doesn’t begin to describe it, and I can only imagine that if the title were to be a “surprise” to me, my reaction would be more on the lines of “…seriously?”