The skies are black and an ominous shadow lingers over the once peaceful land of wherever the hell your hero lives. The Dark Lord has come (or is coming) and you must stop him. For whatever reason, you are the only one in your world who can hope to put an end to tyranny, keep babies from being eaten, and restore the sky to its natural hue. The people of this world can help you in this task – but first, could you possibly deliver this note to the next-door neighbor?

Time and time again, the most important quest imaginable is interrupted by a fairly pedantic task. Gather something for some nobody, return the items, earn a cookie (or other suitable reward). For many gamers, this is the very bane of video game trope-dom and a nonsensical element of the hero’s quest. Not so. Fetch quests are the truest form of gaming realism.

Even in the worst of times – even when the latest Destroyer of Worlds is burning villages and summoning the dead from their graves – the commoners continue to live their lives as normally as possible. It’s how we cope. Whether the big hero vanquishes the demon king of the week or fails and is hung by his entrails outside the castle gates, the baker still needs to get those cakes to the party on time and the little boy still has to find his kitten. Life goes on, and for many, the impact of a player’s small acts resonate greater than any of his more heroic deeds. Plus, games teach kids to do nice things for people – even people who annoy them.

Bilingual Heroes Get More Work
As gamers, we tend to have myopic views of our heroes, only seeing them as banishers of great evils. That’s not the only facet to these characters. Take Bethesda’s recent fantasy epic Skyrim. You may see a hero who is Dragonborn merely as the key to solving the mystery of the return of dragons. Sure, that’s important and all, but take the point of view of the average Skyrim citizen. A man who speaks the common tongue and the language of dragons sure sounds like a linguist to me. No wonder so many people are interested in enlisting this hero to deliver messages across the country. It’s not as if the lands of Tamriel have a postal service. You need a message delivered; it’s going to be by the one person who won’t be deterred by rain, sleet, snow or dragons.

Besides, nothing causes a recession faster than dragons. When dragons are laying siege from Pinefrost Tower to Riften, trade routes close down, crops are incinerated, cattle are eaten (or violated) – the economy stalls. The unemployment rate in Skyrim must have soared the moment the dragons returned. There’s a simple, unspoken message to any hero complaining about playing messenger boy in the lands of Tamriel: Be thankful you’re getting work.

That Letter Won’t Mail Itself, Link
Link loves to fetch things for other people. That’s probably why he’s the most beloved hero in all of gaming. It’s not the green tunic, the sword, of the horse – it’s got to be his willingness to do nice things for people too lazy to do anything for themselves.

And hey, sometimes you have to slowly trade up from one item to the next rather than cutting to the chase and getting what you need right off the bat. The Legend of Zelda: Link’s Awakening may have the most complex set of fetch quests in gaming history. Starting with a Yoshi Doll, Link must trade his way up to a magnifying glass so he can read a book (Link is too self-conscious to wear glasses). Here’s the full trade process: 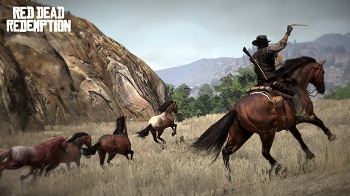 When seen laid out plainly, it’s clear why so much back and forth and trading is required. This is how the economy of Koholint Island works. Unlike other Zelda games, Link’s Awakening doesn’t take place in Hyrule. The over-complicated quest was the only way Nintendo could properly illustrate the unique barter economy of the Island. What kind of hollow game world would Link’s Awakening be without such an exploration of its economical system??

Do These Boots Go with My Thirst for Revenge?
Then there’s the curious case of Red Dead Redemption‘s John Marston, a man who straddles the line of peacekeeper and outlaw. In a time when men are supposed to be men, it’s no surprise that others in the West might raise an eyebrow at Marston. He won’t sleep with women (be they polite whores or undead whores), he’s been bit by the fashion bug (“Squeeee! The Treasure Hunter outfit is finally mine!”), and he likes to pick flowers from the side of the road. People could easily get to talkin’. Not that there’s anything wrong with that.

Fortunately for Mr. Marston, there are often manly reasons for doing some of the things he does in his spare time. Like, that time the old man asked Marston to pick flowers for his dead wife. That’s a perfectly reasonable excuse to frolic through the Western wilderness snatching up desert sage and feverfew. And getting the latest fashion? Well, that’s just a byproduct of all the rough and rugged missions such as buying an item at the general store in Chuparosa or purchasing something pretty from the tailor at Blackwater.

It’s Like Inception, Only You’re Opening Lots of Drawers
Fetch quests are the ultimate expression of our own lives. This is never clearer than in the ultimate fetch quest game, SEGA’s life simulator, Shenmue. As Ryo Hazuki, players open drawers, knock from one door to the next, buy useless crap from vending machines, waste time in arcades, and ask children for the best place to pick up sailors. This is life. Real life. Face it, we’re all fetch questers.

No game has ever allowed you to open several dozen drawers for no other reason than to open drawers. Who does that? Oh, that’s right, I do that. I’ve opened drawers in my house for no reason. I open them, look in, think, “What the hell was I looking for?” and then open the next drawer. Life is pedantic. Fetch quests are a tie to who we are. Take out the trash, find batteries, ask someone for directions, deliver a message – that’s human existence. Without those simple tasks in games, we’d find little connection to a dragon slayer or a gunslinger.

I don’t know about you, but I play games not for escape, but to be reminded of all the boring tasks I have to do in my normal life. The fantastical element means that when I’m doing a real-life fetch quest, I can secretly hope it will lead to battling demonic hordes. Video game fetch quests, then, are a boon for the common man; a symbol of hope that things only have to be boring 70% of the time. Adventure is just around the corner. But first, could you round up these chickens?