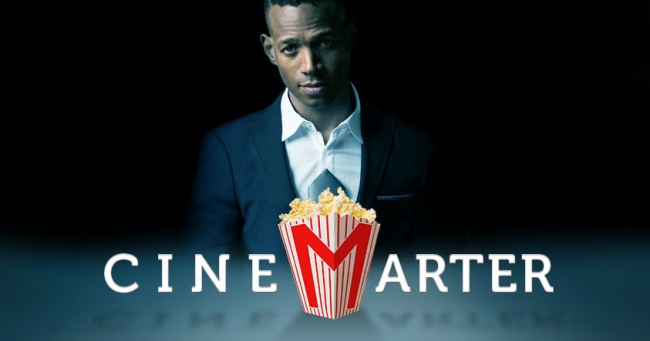 With the likes of Jason Friedberg, Aaron Seltzer, and Marlon Wayans running around, it probably isn’t a surprise that the spoof genre of filmmaking has become more of a joke than any of the content contained within the films themselves. This is a genre on which the likes of Mel Brooks and David Zucker made their names, but now it’s one that we see coming and wish to run in the direct opposite direction. What was the last genuinely good spoof movie? Scary Movie all the way back in 2000?

Marlon Wayans doesn’t direct any of these things, but he produces them and has co-written – with Rick Alvarez – three of the most recent ones. Both A Haunted House films were some of the worst movies to reach cinemas in their respective years, and now we have Fifty Shades of Black, a film likely to do the same. Is there any fruit that’s lower hanging than Fifty Shades of Grey? Anyone with access to the internet has no doubt already seen countless jokes made at the expense of the book and/or movie. Do we really need a whole film dedicated this? 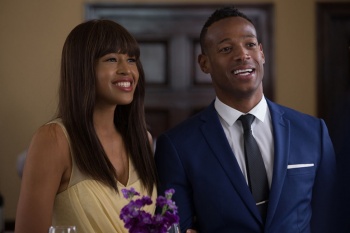 Actually, Fifty Shades of Grey might be one of the worst things to try to spoof since it’s largely devoid of characters, plot, and overall content. You can tell the entire story in a paragraph of text, there’s almost nothing to the individuals participating in it, and it primarily features repetitious scenes of “eroticism” – if you can even call it that.

As it turns out, it gets spoofed by adding in lots of pop culture references, profanity, racial observations, and extremely graphic sexual terms. It misses out on the “joke” aspect of creating a spoof movie, in large part because Wayans and Alvarez, re-teaming with director Michael Tiddes, don’t seem to know how to actually create them. “Here is a thing you might recognize” is not a joke. The only way to save this sort of project is to add a laugh track and turn it into a sitcom, but then you’d have to take out all of the “edgy” boundary-pushing content that the filmmakers think they’re so clever for including.

Not insightful, not funny, and simply another example of a spoof movie done wrong, Fifty Shades of Black is a film that, more than anything else, feels unnecessary.

The plot – if “plot” is even a fair word – sees Hannah Steele (Kali Hawk) meet Christian Black (Wayans), a wealthy businessman, and then begin a relationship with him. He is a dominant, and he wants her to be his submissive. She doesn’t want to be, but maybe she does. We go back and forth – while he stalks her and tries to control her before she’s even signed a contract he’s laid out for her – on this issue for almost the entire film.

There’s a lot to poke fun at in Fifty Shades of Grey, but very little of it made it into the film. The movie – let’s leave the books out of it – is an utter disaster, and a parody could have easily targeted the disgusting main relationship, the repetitious nothing that is the plot, the lack of diversity, or the plain stupidity. There’s a little of that, it’s true – Hannah challenges Christian’s behavior, but then just goes along with it anyway – but there isn’t much. And the film isn’t making any new jokes, save for complete non-sequiturs that don’t work, have nothing to do with the purported target, and often go on for far too long. Is anyone who chooses to go see this film even going to get the reference to Whiplash? I’m thinking those are entirely different audiences.

Marlon Wayans isn’t a good writer, nor is he a particularly talented actor, but he is willing to do almost anything to get a laugh, and there’s something admirable about that. What he’s doing isn’t funny, but he “goes there” in more than one occasion. His amenability to put his own body through less-than-pleasant things was one of the only things to admire about the A Haunted House films, and that’s once again true here. Kali Hawk does fine as Hannah, but only insofar as one could be. There just isn’t enough there to begin with, and the writers don’t give the character much to do beyond that. This is a Marlon Wayans showcase; everyone else is just along for the bumpy, unfunny, and uncomfortable ride.

Not insightful, not funny, and simply another example of a spoof movie done wrong, Fifty Shades of Black is a film that, more than anything else, feels unnecessary. Its lack of jokes and overall quality aside, it feels surprisingly dated and irrelevant – as if the internet has replaced the need for spoof movies in the first place. We’re exposed to people making fun of these things in real time; a year after the fact and we’ve all moved on. And when you’ve got writers who can’t come up with any fresh ideas, and a subject that’s been mined to death, it’s hard to see how anyone thought this was a good idea in the first place. Fifty Shades of Black accomplishes an almost unthinkable task: it’s worse than the film it’s parodying.

Recommendation: Unless you’re a sucker for these sorts of things – if such a person still exists – there’s no reason to even think about seeing Fifty Shades of Black.

Patent Troll Stirred a Hornet’s Nest When It Sued Newegg