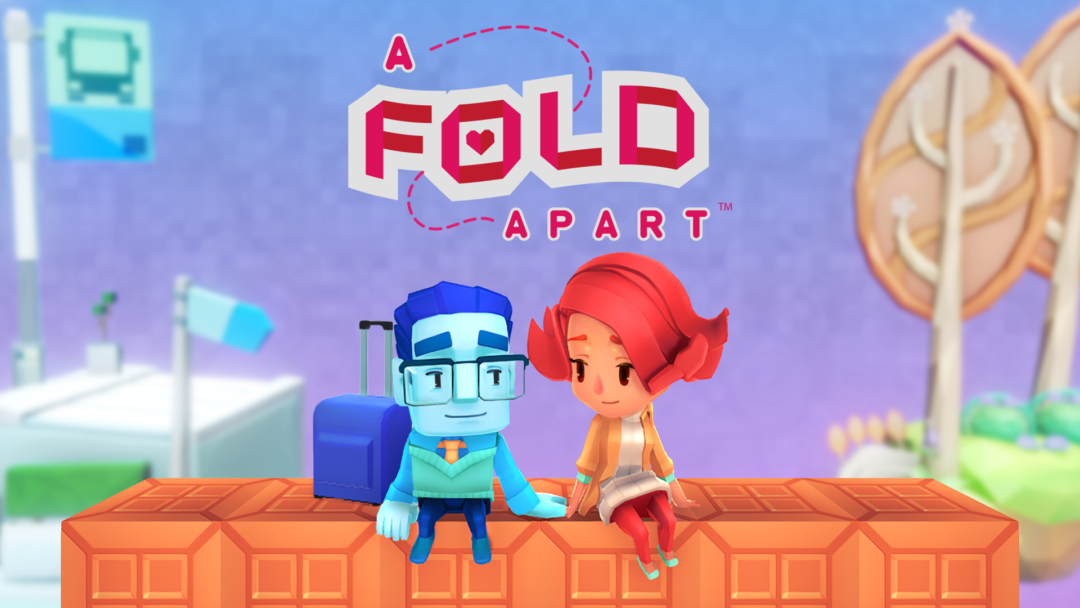 Whatever the reason for the separation — be it work, school, or family — being apart from someone that you care deeply about is an incredibly difficult time fraught with emotion. Long-distance relationships push your communication skills to their limits and misunderstandings are inevitable.

As technology has made it easier to keep in touch with each other via texting or video chats (or even virtual dating through online co-op games), more and more people have experience the strains of long-distance relationships. Despite how common they have become, it’s still very rare to see them represented earnestly in mainstream media, and that is especially true for video games. With our upcoming project, A Fold Apart, we sought to explore this theme in a way that is both true and interactive.

Prior to starting Lightning Rod Games, I was in a long-distance relationship for nearly two years: while I was working for Disney Interactive in California, my significant other was working as a teacher in my home province of Ontario, Canada. Being over 4,100 kilometers (2,500 miles) and three time zones apart can really test a relationship, and it also creates strong emotional impressions on the people in it. So, after moving back to Canada, reuniting with my partner, and starting my own studio, I really wanted to make a game that explored the emotional complexity of my own long-distance relationship. The catch was that I didn’t just want a game that had the story of a long-distance relationship; I wanted gameplay mechanics that emphasized this theme as well. Nothing immediately came to mind, so I tabled the idea while we worked on other projects.

During this time, after attending the Experimental Gameplay Workshop (EGW) at the Game Developers Conference one year, my co-founder, Steven Smith, and I were having brunch and feeling inspired. The EGW has always been our favorite part of the conference and we decided to brainstorm game mechanic ideas that would maybe allow us to work on a project that we could present ourselves one day. (We were fortunate enough to later be invited to participate in the EGW with an early prototype version of A Fold Apart in 2017). Among the various suggestions we came up with, Steven tossed out the idea of folding paper like origami or the back of MAD Magazine where you have one picture that creates a second picture after you fold it, usually serving as first the setup and then the punchline to a joke. I thought the paper folding idea was novel, but didn’t immediately see any obvious gameplay that could be made from it. We let the ideas simmer for a while.

A few months later I had a “Eureka!” moment.

I excitedly called Steven up on a video chat and waved a stack of grid paper at the camera yelling, “I got it!” After Steven made it clear that he had absolutely no idea what I was talking about, I took one of the pieces of paper and started to walk him through an idea I had illustrated on it. What I had realized that morning was that folding paper could actually be the perfect metaphor for a long-distance relationship.

You see, if there is a character living on one side of a piece of paper and another character living on the other side, they’re effectively in two entirely different worlds, unable to see each other or interact. But if you fold that paper over, you can merge the two sides together and create a way for the two of them to reunite. I felt this mechanic was a great representation for how it feels when you’re living apart from someone you love: if you could only mash your physical locations together, everything would be perfect! This simple idea provided the foundation for the puzzle gameplay in A Fold Apart — every puzzle has two sides and can be solved through some combination of flipping, folding, unfolding, and rotating the paper.

As we explored the idea further, we realized that just having bespoke single paper puzzles that involve two characters reuniting wasn’t going to fully support the emotional story we wanted to tell. We could make something cute and story-light (ilomilo uses a similar conceit of bringing two characters together in every puzzle to great effect), but to truly plumb the depths of the emotional experience of a long-distance relationship, we needed to add some additional narrative elements.

Communication, or more commonly miscommunication, really ends up shaping the emotional experience of a long-distance relationship. We wanted to lean into that idea more, so we decided to have the characters send text messages to each other, and use their own thoughts and reactions to those text messages as the main storytelling device for the game. Throughout A Fold Apart, players alternate between playing as Sam, an architect, and their significant other Alex, who is a teacher. Sam has moved away to the city to pursue a once-in-a-lifetime career opportunity, but that distance puts a strain on their relationship.

As anyone who has tried to have a serious conversation via text knows, using text messages as your primary mode of communication inevitably leads to major misunderstandings. Reading too much into what someone else has said or misinterpreting their intentions is a common pitfall in texting, and the characters in A Fold Apart are not immune. These misunderstandings create “emotional moments” in the game, in which the characters explore and reflect on their own internal thoughts, while their negative emotions (such as doubt, guilt, loneliness, and confusion) manifest as physical obstacles that must be overcome. Folding the paper ends up being a cathartic experience as it allows Sam and Alex to work through their issues and find a way forward while also connecting the player to their experiences. And in our quest to make the story both personal but still universal, we let players select the genders of both Sam and Alex at the start of the game. Inclusivity is important to us as a studio, and we feel that to fully experience the emotional impact of the narrative in the game it is important for players to be able to relate to the characters and their relationship as much as possible.

Long-distance relationships suck, but that doesn’t mean that they’re not worth enduring. Despite the difficulties, there are still happy moments. A Fold Apart tries to find that balance. I can’t promise that you won’t need to reach for your tissues as my goal has always been to tell a story about how it truly feels to live apart from someone you love, including all the emotional ups and downs involved. Whether you’ve experienced a long-distance relationship personally or not, we hope that the story provides a genuine, emotional experience — because after all, sometimes the person that you care about most is only a fold apart.