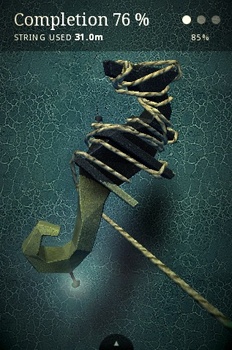 Though the last serval years have seen me purchasing a GameBoy Advance, an original Nintendo DS, two DS Lites, and multiple smartphones, I’ve never had much of an affinity for portable gaming. I play games in large part to explore new places, and handheld screens are usually inadequate windows into imaginary worlds. I’m not a big fan of most puzzle games, either. While I’ve lost an evening here and there to games like Peggle or Bejeweled, titles of the sort that seem tailor-made for portable devices aren’t what keep me gaming.

I’ve been surprised, though. I’ve been gaming on the iPhone constantly, especially in the last few months. I’m sharpening my WordFu skills during my morning commute, I’m managing epic Fieldrunners sessions during my lunchbreaks, and I’m working my way through a few levels of Edge each night right before bed. When I’m not gaming on my iPhone, I’ll often find myself thinking about gaming on my iPhone, something I don’t think I’ve ever done with any other handheld platform I’ve owned. What’s more, I’ve chosen iPhone games when I could be playing console and PC titles – something else I’ve never done before.

Availability is obviously a key factor in my newfound habits. My iPhone’s with me constantly. Accessibility is also huge. It’s always online, and I always have access to the App Store. If the gaming urge hits and I’m looking for something new, I can browse the latest titles, or hit up one of the various iPhone enthusiast blogs for a quick recommendation. New games are just a few fingerstrokes away.

And iPhone games are cheap. Though you can certainly find titles at $10, $15, and even $20 price points, there’s a vast selection of excellent games for under $5. If you keep an eye on new releases, you’ll have no problem finding great games for even lower introductory and promotional prices. I can pick up a new game on any given day for less than I’d pay for a trip to Starbucks. Plus, there are scores of free games, and a growing selection of free “lite” demo versions of paid applications.

The biggest factor, though, is the quality of the games. I used to turn to the internet’s endless assortment of independent browser-based or downloadable games for bite-sized bursts of creativity and artistry. Lately, though, I’ve been finding those sorts of experiences on my iPhone.

Take Zen Bound, for instance, which challenges you to wrap rope around various stone and wooden three-dimensional shapes. The rope transfers a new color to each area it touches, and your goal is to recolor the entire shape. One of the most sophisticated uses of 3D graphics and lighting on the iPhone, it’s exceedingly simple, but incredibly beautiful. Like Zen Bound, the best games I’ve played on the iPhone aren’t familiar ports or clones. They’re designed specifically for the platform, and capitalize on its strengths: a beautiful, high resolution display, an excellent touch screen, sensitive motion controls, and connectivity. Games like Rollando and Aurora Feint are perfect examples. They’re great games that highlight the device’s assets while skirting around its shortcomings.

And the iPhone does have its share of shortcomings. Its touchscreen, sensitive though it may be, doesn’t offer much in the way of immediate tactile feedback. It also demands, in many cases, that players cover a portion of the game screen with their fingers. The iPhone can’t render complex 3D scenes in the manner that gamers are accustomed to, and, perhaps worst of all, its battery life leaves much to be desired.

Developers are increasingly willing to work around or look beyond these weaknesses, though. Citing ease of development and reports of solid profits, both independent and large-scale studios are devoting time and resources to iPhone projects. We’re beginning to see the results of these efforts, and they’re very encouraging.

While the App Store will certainly see a continued influx of sub-par licensed titles and ports, recent months have convinced me that they’ll be accompanied by a steady stream of truly great games. Games like Zen Bound and Rollando, that will help cement the iPhone as much more than just another mobile phone that plays games. And I’ve no doubt that I’ll be downloading and playing these games with the same enthusiasm I’ve found in recent months.

Adam LaMosca is a writer, researcher, and gamer in Portland, Oregon