A few years back, Fire Emblem: Awakening helped blossom a budding RPG scene on the Nintendo 3DS. It certainly wasn’t the first RPG released on the system, but it did seem to kick off a resurgence of sorts. Since then we’ve seen a number of darling and critically successfully RPGs come to the handheld, with developers like Square-Enix and Atlus routinely developing new titles. I was a huge fan of the Fire Emblem: Awakening, so Fire Emblem: Fates had some mighty big shoes to fill. While this second outing on the 3DS doesn’t quite live up to the original, it’s still an enjoyable RPG experience in its own riight even if some of the edges are a little rough. 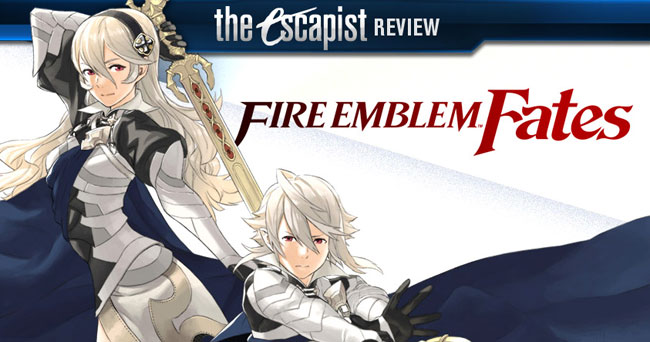 First and foremost, it’s necessary to discuss how Fire Emblem: Fates has been split up into several games. Fire Emblem: Fates can be played from different sides of the central conflict. These are split into separate titles and DLC of Birthright, Conquest, and Revelation. Birthright and Conquest are sold as individual games, though you can purchase and download the other side for a reduced price, and the Revelation DLC is an alternate third path which allows your main character to forgo picking a side – Revelation is intended to be played after experiencing both Birthright and Conquest. There is a limited special edition packages all three together.

In much the same way as StarCraft II, there’s been a lot of talk of pricing and the amount of content. Each of the three paths is roughly analogous to Fire Emblem: Awakening, featuring a similar number of chapters and overall length. But even if the amount of content is on par, it’s basically impossible to kick the feeling that you’re only getting part of the story – especially when the big choice of picking a side happens not right away but a few hours into the game. Obviously the intended way to experience Fire Emblem: Fates is to play through all three, but be aware that does ultimately represent a greater momentary investment than other 3DS titles.

For returning Fire Emblem fans or of epic RPGs in general, more content, even at a cost, is a welcome exchange, but this does makes Fire Emblem: Fates more daunting to newcomers. I plan on putting even way more time in with Fire Emblem: Fates, but if you’ve never played a Fire Emblem before or only dabble in RPGs occasionally, you’re probably better served tracking down Fire Emblem: Awakening instead.

Regardless of which path you choose the initial narrative in the first several chapters remains the same. Without spoiling too much, the player created character has ties to the royal families of two warring nations: peaceful Japanese inspired Hoshido and the power hungry medieval Nohr. As you may have guessed, siding with Hoshido takes you down the Birthright path and Conquest aligns you with Nohr. Overall the story is serviceable, though not exemplary. The evil guy is the evil guy, there’s some behind the scenes stuff going on, but that’s about it. It’s not downright bad, and in Fire Emblem fashion there’s a huge cast of characters to find some favorites from, but it’s just sort of stringing things along.

Making the player custom created character the main protagonist is the biggest anchor. There are plenty of games that deftly handle this, but Fire Emblem compounds the issue by having a big ensemble cast and branching paths. The player avatar and their interactions have to be so malleable to respond to all the situations that it’s hard to get sucked in. Most glaring is that the game never quite sells the relationship between the player character and the warring royal families. You’re supposed to care about your character being pulled in two directions, but it all rings a little hollow.

Cultivating all the little personal stories and interactions between the characters helps to gloss over some of the broader issues however. Like all Fire Emblem games, Fates has a big cast of characters, all with their own personal quirks and little dialogues to unlock with the rest of the cast. Whether it’s a ninja trying to feed a tomboy sweets or brothers coming to odds with their father’s death, the scenes are great little story nuggets to unlock. They serve to identify the characters as more than just a stat block.

In addition to setting the narrative path, your choice between Birthright and Conquest touches on a number of gameplay elements, including difficulty. Certain characters and classes will only be available depending on which faction you side with, like the splitting of the Thief class to be Ninjas for Hoshido and Outlaws for Nohr. It’s fairly well spelled out in-game, but something you might not realize picking up the game off the shelf is how the game paths change the difficulty. Birthright is the easiest. Battles have more straightforward objectives that are easier for your leveled main character to power through and you can freely scout out new fights and challenges for experience and resources – aka grind. Conquest is a considerably harder challenge. You can’t just grind your way to an overpowered team, and battles more frequently have unique win conditions and time restrictions.

While this helps to alleviate some difficulty swings found in previous Fire Emblem games, you should be forewarned if you were initially drawn to Conquest. Finally, note that Revelation is designed to be the middle point between the two in terms of challenge.

The gameplay itself will be instantly familiar to Fire Emblem fans, with a few minor differences. At the most basic level not much has changed in the series since its inception. During battle you’ll take turns moving your characters around a square-boxed map and attacking enemies, which will then do the same in turn once you’ve moved everyone. Attacking an enemy pops up a window indicating your chances to hit, expected damage, and the same information for your enemies counter-attack before cutting away from the top down battlefield to play out the little fight cinematically.

Sometimes you’ll feel like just skipping through them, but don’t be surprised when you’re glued to the screen if one of your beloved characters was accidentally out of position and needs to dodge an 88% hit to survive. Permadeath does make its return, if that’s your jam, but you can elect instead to have characters be knocked-out for the rest of the fight or return on the next turn instead.

When you’re not getting the plucky young villager you saved blasted with fireballs, there’s plenty of satisfying tactical elements to exploit in your favor, like ranged units attacking melee ones outside of striking distance, and a lot of the basic gameplay revolves around this kind of positioning. The Pair Up system from Fire Emblem: Awakening makes a return, allowing you to group two units together to protect a weaker one, quickly ferry a slow unit around, or just combine into a single stronger unit. 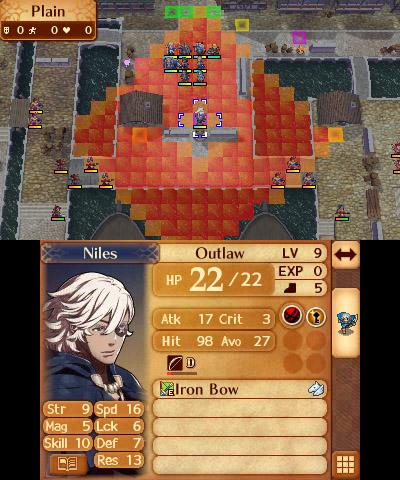 The Pair Up system is also an easy way for characters to foster their Support relationships, little stories and dialogue that play out once characters reach certain levels with each other. This can lead to greater flexibility when advancing to new classes and romantic combinations may lead to children which unlock additional story chapters. There’s also just something innately and strangely satisfying of deciding which of your quirky cast of characters are best for each other. It’s like the Sims except love blooms on the battlefield not over taking out the trash.

The big new StreetPass feature for Fire Emblem: Fates is your personal customizable castle. The castle serves as your home base during the game, and you can wander around talking to the characters you’ve recruited. It’s a big map area that you can lay out with gardens, statues, shops, and more. Heck, you can even change the overall type of castle along with the music that plays while you’re there. There’s even a little push and pull of wanting to line all your buildings up to be aesthetically pleasing or arranging them in a maximized order for defense, you will need to defend it from raiders at times. The one downside is that it obviously ate some resources from the world map. You’re castle might be this customizable space filled with personal character, but navigating the world map is little more than a menu – which sucks some of the adventure and scope out of the experience.

Ultimately this mirrors many of the issues with Fire Emblem: Fates. While it might expand or maintain many of the best parts of Fire Emblem, it’s not without a few flaws that mar an otherwise excellent RPG.

Bottom Line: Fire Emblem: Fates takes two steps forward and one step back for the series. It still retains and expands on many of the great Fire Emblem elements, but Fates slips on a few important aspects.

Recommendation: Dedicated RPG and Fire Emblem fans will find plenty to love, but if you’re not fully invested you might be turned off on spending $80 for the whole experience.