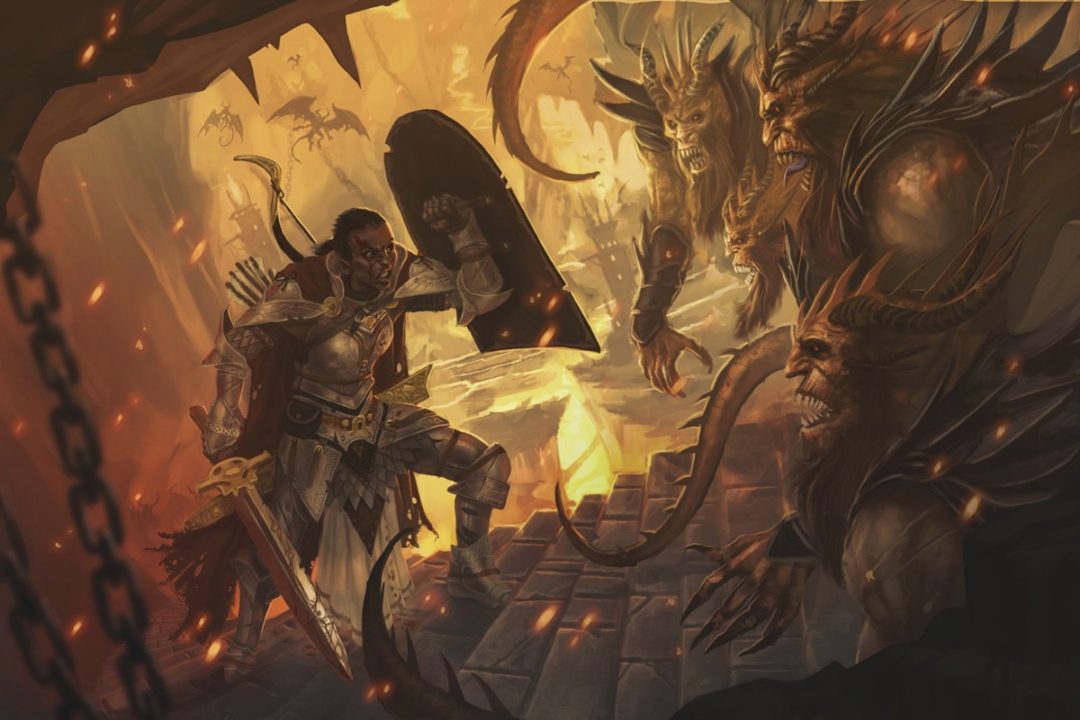 The paladin Seelah ran up to face the newly arisen serpentfolk skeleton. It had already knocked out the rogue Merisiel, who was bleeding out on the ground in front of it. Navigating the narrow confines of the top of the step pyramid where the skeleton had been buried, Seelah stepped past the fighter Valeros and was met with a nasty surprise. The skeleton was also a trained fighter, capable of attacking Seelah when she moved within his reach.

“What’s your AC?” Paizo’s organized play lead developer John Compton asked me. “18,” I reported. “You don’t have your shield up?” I sighed. “No, I was hoping to attack and then heal Merisiel.” “Well that’s going to be a critical hit,” he said. When the dice were rolled, Seelah was in just as bad shape as Merisiel. Luckily it was about to be the cleric Kyra’s turn. Standing in place, she was able to devote all her focus to healing everyone in the fight and getting us back in the action while also dealing some holy damage to the monster.

The combat run at Origins Game Fair was my first look at the final rules set of Pathfinder Second Edition, which will be officially released on Aug. 1 at GenCon in Indianapolis. While I was dubious about Second Edition going into the demo, I found the new rules produced a highly dynamic and fast-moving battle even at level 1.

The session pit our six-person party, comprised of some of Pathfinder’s iconic characters, against a group of venomous snakes and the skeleton. Looking over our character sheets before we rolled initiative I found many familiar elements had been changed. For instance, the paladin healing ability Lay on Hands is now a spell that is cast by expending focus, which is recovered by taking 10 minutes to rest and recharge between fights. When another player asked what a focus power was, I explained to them it was like the encounter powers from 4th Edition Dungeons & Dragons, which can be used again after five minutes of rest. My friend nodded but Compton winced.

“I think one of the reasons you saw me wince was it can be both a complement but kind of a backhand,” he said in an interview following the demo. “They can say you’re just redesigning 4th Edition or you just remade 5th Edition. We learned a lot from what those games did, and you will see these connections, but there’s so much in there that is new as well. The combination is something completely different to be excited about.”

I didn’t mean it as an insult. As maligned as 4th Edition often is, I think it really succeeded at some things like encouraging adventurers to face multiple fights in a row and not requiring every party to have a healer whose whole job is to keep everyone from dying. Both of those problems have also been addressed in second edition.

“The healing has been rebalanced including between encounter healing,” Compton said. “You can spend 10 minutes and use the treat wounds action to recover hit points without casting spells. You can do this enough that you can get by without some sort of significant healing force.”

In combat, every player character and monster has three actions per turn, which can be used to move, attack, cast spells, or use skills. If you attack more than once, you’re hitting at a -5 and then -10 penalty. When I first read these rules in the Pathfinder Second Edition Playtest, a trial run of the new game released last year, I thought that it would just worse the game’s existing problem with fights taking too long and involving too much math. But at level 1, those penalties proved so bad that it was often better for players to find better ways to use their actions like getting into a flanking position to give an ally a bonus to hit. Compton said the system also reduces the spike in complexity that comes from higher level play.

“By and large you won’t be doing dramatically more attacks at a higher level,” he said. “That was one of the things about first edition. We’d go from ‘It’s my turn, I roll my d20, I miss I’m done’ to at level 20 ‘I’m going to roll dice for a day and I’m going to tell you at some point what I did.’”

The three actions also expands the versatility of spells. For one action, a cleric can cast a healing spell to cure damage on someone next to you, two actions lets you heal someone across the fight, and three lets you really unleash by healing everyone in the area and also damaging any undead. Similarly my paladin could use Lay on Hands as a single action which would leave me free to also move and attack. But that’s still trading off with things like raising your shield, which gives you a bonus to your AC until your next turn which I really could have used when fighting that skeleton.

Most creatures in Pathfinder’s first edition can attack when you move through spaces they threaten, but that abilities is now mostly reserved for fighters. That meant we could walk around the snakes with relative impunity to get into better combat position, but the skeleton punished me for the same tactic. I’m still not sure how I feel about this. Opportunity attacks can definitely lock fights down and force players to resort to standing in one place and swinging at the enemy rather than taking actions that could be more fun, but I also enjoy the tactics required to navigate a crowded field of monsters. Luckily not only fighters have the ability to hurt monsters outside of their turn. In another similarity to 4th Edition, my paladin could attack enemies that hit her allies while also providing them with a holy shield that reduced some of the damage they took.

The fact that the skeleton’s critical hit could have been mitigated by my shield is indicative of another rules change. Critical hits, which do significantly more damage than regular ones, have traditionally just been triggered by rolling exceptionally high on a die, but now you have a critical success any time you roll 10 more than your opponent’s defense score. That means big spikes in damage are a lot more common when fighting lower level opponents. On the other hand, you can also critically succeed when defending, with a good enough saving throw allowing you to ignore all of a negative effect instead of just taking half damage. I found the change built tension and excitement throughout the playtest and I’m particularly curious to see how it works at higher levels.

Lucky for me and Merisiel, it’s now easier to get back into the fight after being knocked out. Like with 4th and 5th Edition D&D, Pathfinder Second Edition has done away with negative hit points so unconscious characters who receive any magical healing can jump back in. But Pathfinder has also learned from a problem those games had where it was often efficient for healers to devote the minimum amount of resources to healing rather than trying to ensure that their allies stayed up. Now every time a character goes down they gain a dying token and if they get three of them within the encounter they’re gone for good.

As much fun as the fight was, Compton said what he’s most excited for people to experience about Second Edition is the different modes of play. A version of the exploration system that Paizo invented for their popular Kingmaker adventure has been integrated into the base game to allow players to select a job they are doing rather than being forced to meticulously search a dungeon for traps five-foot-square by five-foot-square. There’s also a formalized downtime system when characters can make money, recover from injuries, research spells, and craft items. He’s particularly excited about being able to use downtime as an alternate reward for successful adventures in the Pathfinder Society, Paizo’s organized play program.

“Second Edition has been an opportunity for us to take all the lessons we learned in First Edition,” he said. “Pretty much the whole team came up through the company playing Pathfinder Society. We saw the wonderful things that did work, and we lived through all the things that did not. This has been a good chance to change up some of those. It’s a chance to start back from level one and create cool new storylines that not only appeal to our experienced players but are things that new players can jump in on.”

I’ll be back sharing more thoughts and my experiences with Pathfinder Second Edition following GenCon.

Where Was Blue Team After Halo: Combat Evolved? First Strike Has the Answers

Silent Hill Needs a Hard Reboot, Not a Sequel