Every year, we talk about what we loved about the past 12 months of geeky entertainment. It’s usually under the guise of discussing what to honor with our Escapist Awards, but we always seem to gravitate toward that list of five unique things that especially moved us this year. It could be cute, it could be have emotional impact, it could be just downright silly, but each of the things on these lists means something to us.

Here’s what some of The Escapist‘s most passionate tabletop players picked for their five favorite things from 2014.

From the desk of Adam Gauntlett

Favorite Things? Sounds like something Stephen King ought to have written. The odd thing is, a lot of my favorite things for this year are actually due next year; Pelgrane Press’ Dreamhounds of Paris being one. That’s on pre-order for delivery next year, a kind of post-Christmas Christmas, and yes, I am incredibly jealous of the people who got to pick up their copies at Dragonmeet in London this year. However did you guess?

Dreamhounds, for those of you not familiar with the concept, takes the surrealists of the 1930s – Man Ray, Dali, Kiki de Montparnasse – and puts them in H.P. Lovecraft’s Dreamlands. The people who wanted to change the world through images and art end up battling for control of humanity’s dreams, against both themselves and forces of the Cthulhu Mythos. Yes, that’s all my boxes ticked. Next?

The TimeWatch RPG is another one that will probably be a favorite next year rather than this one. Delivery’s been delayed for this Kickstarter, darn the luck, but I’m looking forward to the Dracula Dossier Timewatch add-on. Patience is a virtue, I keep telling myself. Patience is a virtue …

I’m a huge movie buff, and The Lego Movie hit all the right notes, for me. Great fun to watch, plenty of action on the screen, action driven by the characters and not the other way around. Laughed my ass clean off. Incidentally if anyone should find the darn thing, let me know, won’t you?
Odd side note: I had no idea until just this minute, as I frantically checked to make sure that The Lego Movie really was released in 2014, that some optimists in Italy are making a Left4Dead movie. Postproduction’s due to finish later this year, which means, like so much in life, I have to wait till next year to find out if it’s any good. Intrigued? Yes. Yes, I am.

The Jack Chick flick Dark Dungeons was everything it promised, and more besides. I do loves me some gallows humor, and that one has a whale of a time playing with the base concept. Everything Chick said is true! EVERYTHING! Pity about Black Leaf, but you can’t make a Satanic omelet without breaking a few eggs. I’m so glad I supported this Kickstarter; best of luck to the production team, and everyone involved. I hope you guys had as much fun making it as I did watching.

Oh! I recently picked up Five Nights at Freddy’s on Steam. Sweet Jumping Jeebuz! Immediately shot to the top of my scary games list. Such a simple idea, and yet so remarkably effective. No, I did not survive the first night. Yes, I do want to go back to Freddy’s, and don’t ask me why; I must have a thing for minimum wage jobs with a high body count.

1. Some Novels for Good Gaming

I’m going to end with two good books. This was the year I discovered zombie novel A Questionable Shape, by Bennett Sims, a story with brains as well as heart. ‘At seven this morning, an hour before Mazoch usually arrives, I sit down with a sheet of loose leaf to write out some of the sites we’ll be searching for his father today. The list is for Rachel, who’s still asleep. I’ll leave it on the coffee table by our copy of FIGHT THE BITE, the infection-awareness pamphlet that the Louisiana Center for Disease Control doled out back in May …’ Any zombie novel that quotes Freud before the action even starts has something special going for it.

This was the year I read Chris Brookmyre’s Flesh Wounds. ‘Stevie was one of Scotland’s top gangsters. Had to be true: he’d read it in the Daily Record. Like there was a league table or something, or a chart. Up two places this week, it’s Steeeeeevie Fullerton!’ It’s Steve’s birthday, and he’s about to get one hell of a present. Top prize, for most interesting use of a pumpkin in fiction.

That’s it for me! I think that adds up to five, right?

From the desk of Robert Rath

Exhibit A: the LeLe SWAT Team. I picked up this adorable flak-jacketed terror squad at a market in Hong Kong, and though they’re Made in China with a capital M-I-C (including ill-fitted and missing pieces), they’re delightful. Little pistols fit into little holsters. The NVGs toggle up and down. And who doesn’t want a Lego flashbang grenade? Find them at your local dark corner of the internet today!

Greetings, Clone #4! Have you heard that a rebooted Paranoia succeeded on Kickstarter? It is not true. According to The Computer, Paranoia has always had a streamlined character creation and combat system, even when it released in 1984. All previous versions of Paranoia – such as ones made available through the Bundle of Holding this year – are disinformation planted by mutant Commie terrorists.

Paranoia lets you experience the joy of a benevolent Orwellian utopia and keep it safe from subversives like your other party members. Play it!

[You have six seconds to comply.]

Specifically The Shadow Over Innsmouth and At The Mountains of Madness Audiobooks, Read By Richard Coyle.

Lovecraft may have been a master of horror, but his dialogue was atrocious. This especially mars his otherwise exceptional novella The Shadow over Innsmouth, where he indulged in transliterated accents that make the story an uneven read. BBC Radio 4 came to the rescue a few years ago, producing an audio version with Welsh actor Richard Coyle (Coupling, Grabbers and Going Postal). Coyle smooths the rougher sections and fosters a brooding atmosphere, resulting in a deliciously unsettling adaptation. He returned to Lovecraft shortly afterward, recording At the Mountains of Madness as well. Both came to Audible this year, but if you’re feeling cheap, they’re also on YouTube. Jump-start your CoC campaign with a group listening party.

Miriam Black knows when you die. Skin contact nets her a flash-forward of when and how you’ll go. It gets her in trouble, especially when the crows start to talk.
Currently a trilogy, the Miriam Black novels – Blackbirds, Mockingbird and The Cormorant – deliver pitch-black supernatural noir with the pace of a muscle car at full rev. Miriam’s that rare protagonist who retains humanity and vulnerability while upping her badass level on every page, and her opponents are truly chilling. A must for World of Darkness fans since it strikes a similar tone – Wendig worked on Hunter – but perfect for anyone who loves falling into the shadows. 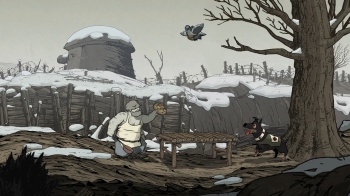 1. Valiant Hearts and This War of Mine

I group these two games together because they have a similar theme that’s good for gaming everywhere – that for individual people, wars are endured rather than won. They convey this message in different art styles, mechanics and tones, but both share an ideological basis.

Valiant Hearts tells an affecting story through its animated visuals, contrasting with the mud and death of the trenches. This War of Mine deals with uncertainty and survival. Both find expression in objects found around the environment, where a plank of wood can determine survival or a disused helmet tells a story.

Another similarity: both deserve your dollar.

From the desk of Jon Bolding 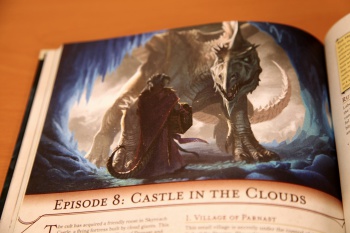 Days of Wonder‘s single precious entry into the board game scene this year is perhaps not as impressive as it could be, but sure is a hell of a lot of fun to play if you get out of your own way and don’t overthink it. Dropping little meeples mancala-style onto nearby tiles is a blast, as is setting up fun tolls for your opponents to pay for taking various actions – or gathering up a handful of Djinns that just let you break the rules of the game. Bruno Cathala’s game design might be a little obtuse for first time players and veterans alike, but it’s clear there’s a method to the madness. Now if only the box art wasn’t so weird and orientalist.

Say what you will about the world’s oldest roleplaying game, the fifth edition really takes me back to my early days playing third edition – it’s familiar to players from the 90s and early 2000s, but includes enough modern game design sentiment that it feels updated to the present. The character classes are a bit complex for some story-minded gamers’ sentiments, but the customizability will really speak to those who’ve grown up on computer or video game RPGs like Dragon Age or Neverwinter Nights.

History is the world’s greatest sandbox, and playing in the alternate histories of Europa Universalis has been the best part of my year. I’ve gotten countless hours of gaming out of it, and it even inspired my newest D&D campaign by firing my imagination on the European age of exploration. The Art of War expansion added so many new features that simplified and streamlined Europa, lending new accessibility that helped me get friends into the game who had been previously intimidated by its complexity. 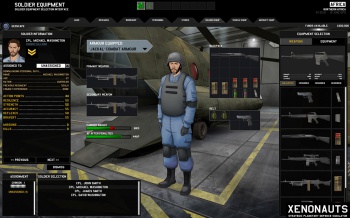 Shooting aliens has always been a passion of mine, thus my love of XCOM and its derivatives over the years, but Xenonauts added the sheer difficulty and tactical complexity I’d always wanted from a world defense game into the genre. The detailed strategic coordination at the global level gave me inspiration for another RPG campaign, one based on cold war politics, and when you combine that with the awesome work of megagame makersI have a long term project cooked up for roleplaying come next year.

Volko Ruhnke’s Counter-Insurgency games have become legends in their own time, both for simulating the tense struggle between occupied and occupier and for promoting the kinds of roleplaying that had all but disappeared on most wargame tables. Like Jason Albert says in this Washington Post article from earlier this year, “Ruhnke’s games stood out. He was tackling recent and still-raging conflicts, such as the amorphous war against terrorism in his game Labyrinth. It seemed as if he was attempting to span the divide between the kitchen-table gamer and the grizzled hard cases from wargaming’s first golden age.” So it should be no surprise that his game Fire in the Lake, a detailed simulation of insurgency and the war in Vietnam, is a crushingly brutal and brilliantly fun experience on any of its many settings. A do not miss for wargamers and strategy gamers of every sort, easily as good as his superb A Distant Plain.