How do you fight against an enemy you can’t see and can barely hear? Well, you shut your door and mutter to yourself “Is it gone? Please say it’s gone.” This is what you sound like when you play Five Nights at Freddy’s 4, and sometimes listening closely and hoping they’re gone is all you can do.

Five Nights at Freddy’s is a series that traditionally put you in the role of a late night security guard at a rip-off Chuck. E Cheese. Your goal was to use security cameras to monitor a group of killer animatronics as they headed toward your office, and, when they got there, ward them away using doors, masks, or sounds depending on which entry in the series you were playing. But on higher difficulty nights you never had a chance to check the cameras. The animatronics came at you so quickly that all you could do was rapidly check your immediate surroundings and hope to not get jumpscared. 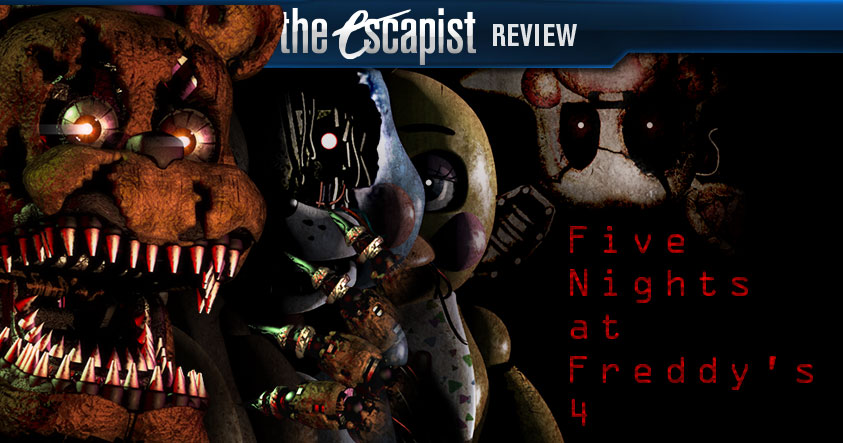 In Five Nights at Freddy’s 4, designer Scott Cawthon has realized that the camera system was mostly a distraction and has decided to cut it out altogether. You are no longer a security guard in a pizzeria, but rather, a child cowering in his room, terrified that warped nightmare versions of the Five Nights at Freddy’s animatronics may be lurking in the dark. The only way you can keep tabs on the animatronics, is by checking the doors to your right and left, the closet in front of you, and the bed behind you, i.e. exactly what you would be doing on later nights in earlier Five Nights at Freddy’s games.

Your only tool against the threat in the darkness is a flashlight. If an animatronic is coming down a hallway, peak out the door and shine your flashlight on them and they will go away. The flashlight also scatters mini-Freddies on your bed, which will kill you if allowed to linger.

The catch is that you can’t see down either hallway (or in your closet for that matter) without shining your flashlight, and if an animatronic has already made it to your door by the time you flick your flashlight on, it will kill you with a jumpscare. This is where Five Nights at Freddy’s 4 mixes it up with one of the most interesting mechanics to be used in the horror genre: Audio. 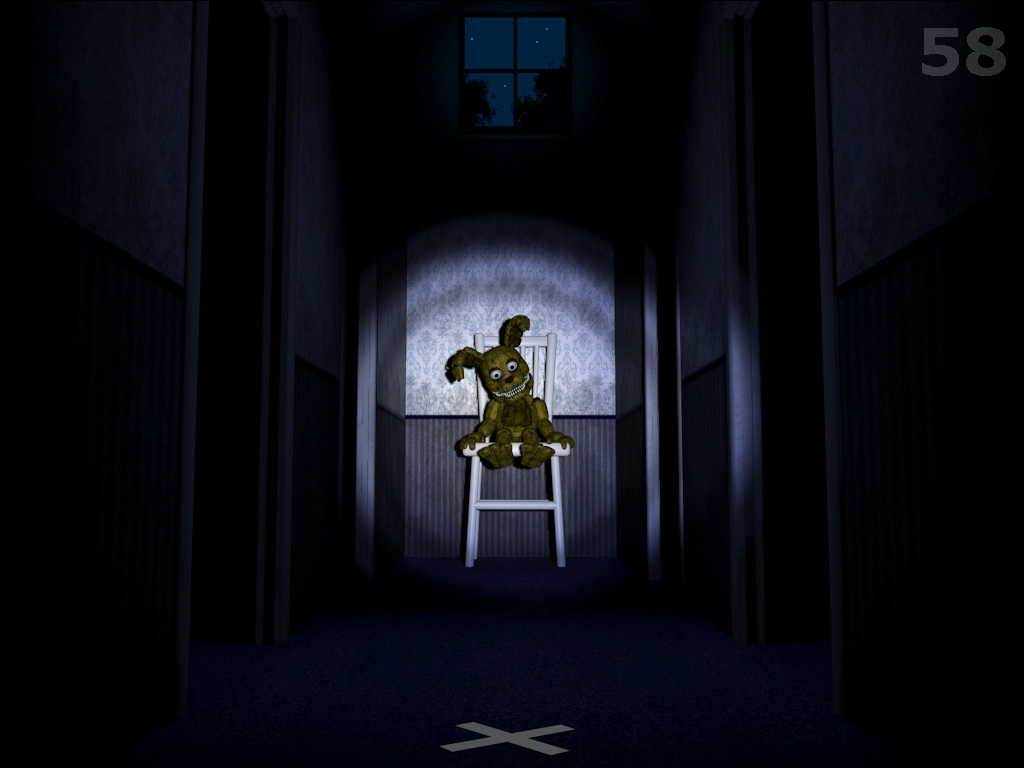 You have to listen closely to figure out whether or not something is ready to attack you. If you hear faint footsteps, the animatronic is probably far at the end of the hall and its likely safe to use your flashlight. If you hear deep breathing or radio static, the animatronic is right at your door, and if this happens all you can do is hold the door shut and listen closely for it to lose interest. Beware, because closing the door when an animatronic isn’t present causes them to rush the door at high speed, likely killing you when you next open it.

This is the basic gameplay formula that repeats each night, but it keeps itself fresh by throwing variations at you here and there. Chica’s cupcake, for example, can attack you independently. Freddy sometimes shows up in place of Bonnie at the left door or Chica at the right (a reference to Five Nights at Freddy’s 1,) and operates on different rules. There’s also a great surprise or two that must be handled in a completely different method from any other enemy in the game.

Every time you manage to survive a night you are able to play an Atari styled mini-game which reveals more about the Five Nights at Freddy’s plot. Scott Cawthon obviously realized how much the fan base cares about the story and greatly increased the quality of these games because of it. They are not longer than ever before, and they feature actual dialogue which is something we have only seen from the phone guy in previous installments. They are also less vague, giving us answers to questions fans have been asking since the release of the original.

It’s also worth noting that the plot has gotten much darker than in any previous game. It centers around the bite of ’87 where an animatronic took a chunk out of a customer’s frontal lobe. We all assumed this was just an robot going berserk, but the truth is far more disturbing. It flips the plot on its head and deals with issues like child abuse and bullying. It may honestly be too much for some gamers, but anyone who has the stomach and has been following the Five Nights at Freddy’s plot from the beginning will be deeply paid off by the ending. It even explains why the animatronics jumpscare you in the first place!

The game is not without its flaws. The sounds in the game, despite being the main gameplay mechanic, are very quiet. This is an obvious attempt to make gamers turn up their volume in order to be even more terrified by jumpscares, but it comes off as more annoying than scary. It’s a cheap attempt to make the game more frightening at the expense of gameplay.

While only relying on your ears to detect enemies in innovative, it also makes the game impossible to play for anyone who is deaf or hard of hearing. I have only a few minor hearing problems and I could barely hear the audio cues at all. If you don’t have a stereo sound system you are similarly screwed, as you’ll be unable to tell if an animatronic is coming at you from the left or right.

Removing the camera is also a double edged sword. On one hand, it streamlines gameplay and provides a profound disempowering atmosphere. On the other hand, it makes every death feel like a cheap death because it was harder to see coming. The camera also used to help build tension by showing you the animatronics slowly getting ready to attack. Without it, the tension is always at maximum and if feels like you could die at any minute. This is great if you succeed because each individual night fills you with more anxiety than the last. But if you fail repeatedly you start to become desensitized to that tension, and since there’s no device to help build that tension again, the game can become stale after repeated deaths.

There are a number of glitches that plague the game, including reports about the game refusing to run in fullscreen, cutting out important audio, and crashing. Scott Cawthon has said he will address these issues as soon as possible, and has already released a few hotfixes. Just beware that early adopters might find themselves struggling with bugs more than killer animatronics.

Despite the flaws and bugs, we couldn’t have asked for a better end to one of the most innovative horror series of our time. It’s a clear love letter to dedicated fans, and an amazing value for only eight dollars on Steam. I’m very happy with the conclusion of Five Nights at Freddy’s 4 and with this, I think the restless spirits of Freddy Fazbear’s Pizza can finally be at peace.

Bottom Line: Five Nights at Freddy’s 4 answers our lingering questions about the franchise while providing a tense and frightening gameplay experience.

Recommendation: It’s perfect for any longtime fan of the series, or anyone just looking to jumpscare the crap out of themselves.