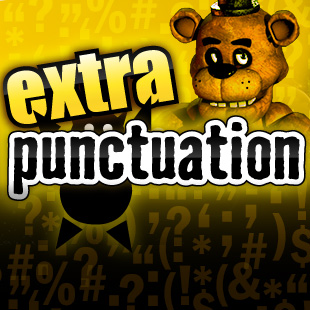 So, I noticed a fairly predictable response to my statements on Five Nights At Freddy’s; a lot of the people who support the game were chalking it up as a win that it was just too scary even for someone who usually enjoys survival horror games. And if they want to take as a victory that I have absolutely no interest in playing it any further, then they’re welcome to it. Personally, I wouldn’t.

This may surprise those of you who are used to my demeanor as suave and phlegmatic as a well-paid butler, but I’m a rather jittery person at times, often a bag of nerves about one thing or another, and I can’t stand the anticipation when I’m fairly certain a game or film is setting up a jumpscare. I get all tensed up, can’t focus on the story or anything else, and overall don’t find the experience pleasant, so I don’t seek it out. Games like FNAF and films like the Paranormal Activity movies are almost nothing but jumpscare.

But when we say that something is ‘nothing but jumpscare’, what we mean is that it’s ‘nothing but anticipation’, because a jumpscare is by its nature a very very brief thing. The jumpscare part I’m fine with. I like the adrenaline rush and the excitement and danger that comes of there suddenly being a monster that I must quickly adapt into my worldview. It’s just the anticipation that I can’t stand. And isn’t it the case that if the anticipation exists, and therefore we have predicted that a jumpscare is going to happen, then the jumpscare has failed before it even started?

Surely the whole point is that a jumpscare is sudden and unexpected. I’ve played plenty of horror games that had jumpscares that I didn’t see coming, but my usual response after extracting my head from the ceiling was to go “Ah, shucks, ya got me” and then continue. I don’t do that if I’ve been seeing it coming the whole way, then I just get annoyed at it for drawing itself out.

I think I heard it said in a review of Paranormal Activity by the excellent Red Letter Media people that the whole audience were tense and silent when the build-up was in full swing, but the moment after the jumpscare was over, everyone in the room would immediately relax and lose interest in the film. Similarly, the jumpscare in FNAF is also the point when you necessarily lose all interest in the game, because it’s the point that you get killed. And none of this does anything to make me or that roomful of cinemagoers engaged with the plot or the creeping existential dread that horror is supposed to create.

I made the point in my review that the jumpscare is the horror equivalent of the fart joke in comedy. Since I’ve defended the fart joke in previous editions of this column, that statement probably deserves expansion. You see, part of what attracts me to horror and comedy is the way that they both create physical reactions within the audience, based around artful combinations of tension and release. The fart joke, or more broadly speaking quickfire slapstick gag, produces an immediate physical response, if done right: the sudden expulsion of laughter you couldn’t have held back if you tried. The jump scare does the same thing. It makes you jump.

Both of these things have a place. They create the quickest possible connection between art and reaction, so they are best used as a sort of stress test for the audience. You can throw them out like little jabs of the pin to make sure we’re on the right page, give the atmosphere a little boost. But a game or a film can’t rely on them totally, because the nature of their provoking purely physical reactions means they have little or no emotional connection, inspiring very little on a higher thought level. They’re immediately forgotten about as soon as they pass. The truly great comedy or horror creates a deeper, prolonged atmosphere of humor/terror by getting inside the head, and those made with the greatest confidence don’t need ‘stress tests’ at all.

It’s funny in, say, Fawlty Towers to watch John Cleese as Basil Fawlty rantingly try to beat his car to death with a tree branch. But it’s even funnier when we know the full context, and his status as a pompous wannabe-social climber abandoning dignity in the throes of a total breakdown. And if I’m startled in, say, Amnesia: A Machine For Pigs by a sudden clang and a rumble of nearby machinery, then I have a little jump, but it also enforces that I’m trapped in the belly of the titular Machine a long, long way from any help, that I’m such a tiny thing scurrying around its workings that I’m intimidated even by its most mundane workings. Something’s toying with me and its movements are too complex for me to understand. It all works with the atmosphere.

The other thing the jumpscare can do is signal the call to action: something’s jumped out and it’s time for you to think fast and deal with it. I don’t dislike Doom 3 as much as some people for its monsters constantly pulling the jump-out-of-cupboard trick, because I was carrying a shotgun, and could give them some immediate constructive feedback of what I thought of their clever prank. So it’s kind of obnoxious when the jumpscare is itself intended to be the climax.

Basically, that whole feeling of tense anticipation that I find so irritating, I associate that feeling with a horror game not working properly. Firstly because it means I know there’s a jumpscare coming, but it also means that I’m not taking enough of an interest in the rest of the game to be distracted from the anticipation, or from speculating when a jumpscare’s being set up. And that’s what I realised is the common element of horror games I like that FNAF most definitely does not have: the ability to explore, to gather information on our surroundings, and the sense that we are physically moving towards a goal. Even Daylight with its obnoxious jumpscares I could get through because there was that sense of A to B. It’s not the jumpscares that turn me off FNAF, it’s the sitting on my arse waiting for them to happen.

People tell me that FNAF actually has a really intriguing story once you get into it. That’s great, good for it. Still not gonna play it. Give me a call when they add the option to run down the corridor braining things with a hockey stick.