Editor’s Note: As of this afternoon, Five Night’s at Freddy’s World Has been pulled from the Steam library and is no longer available for sale.

Before I talk about Five Nights at Freddy’s World, I have to bring up another game series called Five Nights at [email protected]#*kboys. In short, this was an unlicensed fan project taking characters from the FNAF universe and putting them into JRPGs. Each game plot usually involved one of the FNAF animatronic mascots trying to throw a massive party and being stopped by the security guy. They were filled will drug, alcohol, and sex references, and voiced entirely by text-to-speech algorithms. They were immature, cheaply made, offensive on every level … and they were fun!

While these games were hard, JRPG grinding didn’t matter as much as understanding gameplay systems. Combining different abilities which seemed odd, random, or poorly programmed, but did heaps of damage together, was far more compelling than you’d think. There was also something charming about putting mascots from the FNAF series together in one party. It helped a sloppy game created with RPG Maker feel oddly complete, and much of the FNAF fanbase enjoyed it. 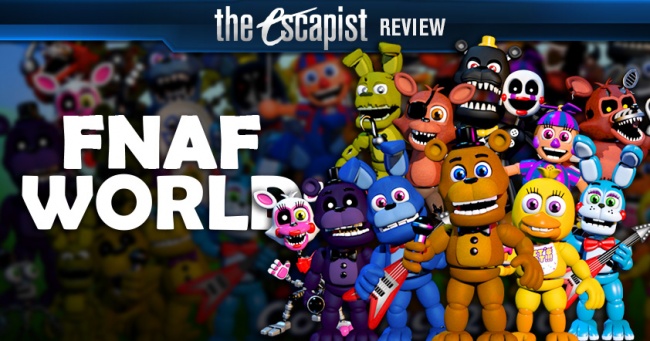 This brings us to Five Nights at Freddy’s World, Scott Cawthon’s FNAF JRPG, which does the same thing as Five Nights at [email protected]#*kboys with official branding and a PG plotline. You take control of the FNAF animatronics in the village of Animatronica. Or is it Animatronic village? Village-tronica? (The game literally tells you Scott never came up with a good name for the setting.) It’s an alternate reality where the FNAF characters are real, prance around a forest all day, and blah blah blah insert cutesy stuff here. Unfortunately, glitches are starting to invade Animatronica because something bad happened on “the flipside” AKA the real world. It’s up to you to hunt down these glitches and save Animatronica, though what you must do when you find them is never explained.

The game’s flimsy premise is played up for laughs, and for the most part it works. Much of the writing is genuinely funny, parodying the FNAF series and its fanbase. Loading screens have cute quips about each animatronic mascot, making fun of elements like the gruesome appearance of The Mangle. Sadly, the writing is inconsistent. Many laugh worthy lines are separated by exposition that takes itself too seriously, or jokes that fall flat.

It’s important to note that this is not a horror game. You won’t find any jumpscares here. Five Nights at Freddy’s World is an RPG first and a parody second. While the game alludes to some plot tie-ins with the core FNAF franchise, you won’t find any surprise revelations. Searching for multiple endings is fun, but none are built up or referenced over the course of the game. They appear from nowhere, and any plot reveals they offer are too vague to be rewarding. Heck, the normal ending taunts you for finding nothing important and the hard ending makes fun of you for wanting an explicit conclusion.

In terms of gameplay, Five Nights at Freddy’s World is your standard JRPG fare. You wander around a world map – presented in the style of FNAF‘s Atari-esque mini-games – speak to NPCs, purchase things from shops, get into random battles, level up, and so on. The battle system itself is unique compared to most JRPGs. You’ll assemble two parties of four animatronics, each of which has three abilities, and switch between the two parties whenever you’d like. Otherwise, battles work on an ATB (active time battle) system, where you and enemies attack each other once a certain amount of time has elapsed

It’s the game’s abilities which are the most interesting, since they share the complexity of abilities in Five Nights at [email protected]#*kboys. Instead of simply dealing damage, attacks cause effects like damage over time, AOE, multiple hits, buffs, debuffs, and more. Healing abilities don’t simply restore HP, they heal you in response to enemy attacks, resurrect you when you die, invert damage, and so on. Some of the best abilities in the game randomly choose attacks from other characters, or offer instant kills if the opponent’s HP is above or below a certain number. Understanding how to combine these abilities effectively makes the difference between breezing through battles and losing your party in one hit.

So there’s a nugget of really interesting JRPG gameplay in Five Nights at Freddy’s World, but unfortunately that nugget is buried in heaps and mounds of sloppy design. Let’s be clear, Five Nights at [email protected]#*kboys‘ poorly written script and mechanical voice acting were sloppy, but that was played up for narrative camp. Its gameplay never felt broken, and it was hard but fair. As long as you knew what you were doing and had a decent strategic mind, you could win.

Five Nights at Freddy’s World inherits the difficulty of its predecessor, but the gameplay itself is much harder to grasp. This is largely because the does an poor job of presenting crucial information to the player. For example, there is no ATB bar in battle, so you don’t know how close you or opponents are to attacking. It also doesn’t tell you switching parties resets your ATB, leaving you wondering why opponents seem to attack much more often than you do. 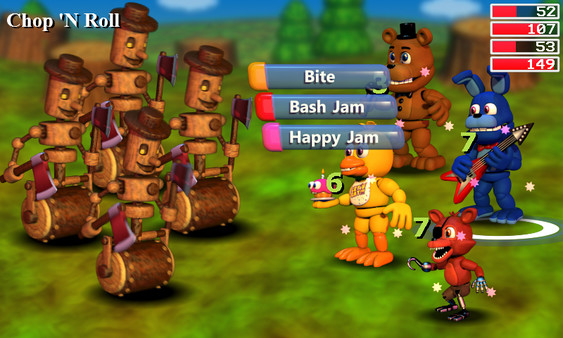 The HUD only shows your current HP, not your maximum HP. The game doesn’t tell you that if you switch parties while an ability is being used, it affects the other party instead. Bosses have HP bars so you can track damage, but random enemies and animatronic fights do not. The game’s equipment and leveling systems are also poorly explained. You are given no indication which characters are your best healers, attackers, or defenders. There is no status menu to speak of. You can buy items and upgrades that assist in battle, but can’t read what effects they’ll have on your party.

Preparing for battles in advance was almost impossible, but thankfully many issues have been fixed in the latest patch. All the same, without a status menu the only way to view descriptions is by holding the mouse over items, which is too chaotic for on-the-fly strategies.

There is a color coding system that helps a little, but Five Nights at Freddy’s World never explains it to you. By the time my game ended, I thought pink meant heal, white meant buff, and black meant instant death. Yet some pink abilities also buffed, and some black abilities dealt damage. And I never figured out the difference between a yellow and red attack.

Visually-speaking, the battle graphics are way too frenetic. Each attack produces a ton of graphical effects, and gameplay is so fast-paced it all tends to overlap. Flashing sprites zip around the shaking screen, and damage sound effects are played so quickly you can’t tell where one ends and another begins. Animations can also obscure the timing of your attacks, botching entire actions. On top of that, the game is painful to look at, and I don’t mean garish or tacky – it caused my eyes physical pain. If you suffer from epilepsy or seizures, stay far away from this game. 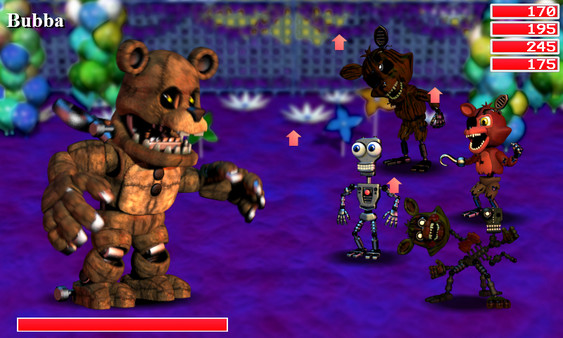 I can go on about the flaws in this game, from uninspired stock fonts, to dialogue boxes not text wrapping correctly, to incredibly hard-to-navigate dungeons. But I don’t have to: Cawthon agrees with me. In a launch-day post on Steam, he admitted the game was released in an unfinished state, and promised many problems will be fixed in the near future. To his credit, the latest patches are helping, but I’m still waiting on a functional status menu. The Five Nights of Freddy’s World we get in three months may be a much better game, but as it stands, I prefer Five Nights at [email protected]#*kboys – warts and all.

Bottom Line: Five Nights at Freddy’s World is a retro parody JRPG that feels incomplete now, but is steadily getting better as patches come out.

Recommendation: Only FNAF fanatics and JRPG fans with money to burn should pick this up right now. Otherwise, wait for patch support.

The author’s references to Five Nights at [email protected]#*kboys do not constitute The Escapist‘s endorsement of the game.