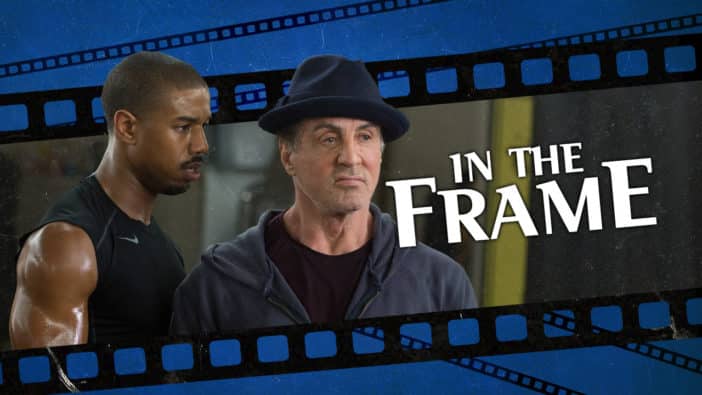 This month five years ago, the same month that Creed was released, Matt Singer coined the term “legacyquel” to describe the class of film, a belated sequel to a beloved classic that shifted focus to a new protagonist within an existing fictional universe. The concept was hardly new in November 2015. In October 1986, Martin Scorsese had directed The Color of Money, a sequel to The Hustler from 1961. Launching in September 1987, Star Trek: The Next Generation served as a belated follow-up to the original Star Trek.

Still, the concept of the legacy sequel really took off during the second decade of the 21st century, leading to films like Tron: Legacy, Star Wars: The Force Awakens, Blade Runner 2049, Bill and Ted Face the Music, Mary Poppins Returns, Halloween, and more. There were reasons for this trend. Hollywood had grown increasingly dependent on existing intellectual properties and brand recognition. New installments also helped to keep library titles evergreen, fresh in the audience’s mind.

As Adam Rogers pointed out in the same month of Creed and the “legacyquel,” studios were transitioning these properties into “forever franchises.” However, many big franchises were decades old at that point and needed new blood. If audience members would not “live to see the final Star Wars movie,” neither could the original cast. As such, it was important to bring in new characters and new perspectives, to find new angles on old stories.

The Rocky franchise had arguably wrapped itself up in the superb Rocky Balboa, which served as a beautiful swansong to Sylvester Stallone’s eponymous Philadelphia slugger. It was the perfect farewell to the character. Indeed, it’s notable that the film’s “It ain’t how hard you hit” speech is arguably the defining moment for the character and the series. The Rocky films were 30 years old at that point; it felt like a minor miracle to get a belated coda to the series that was that good. 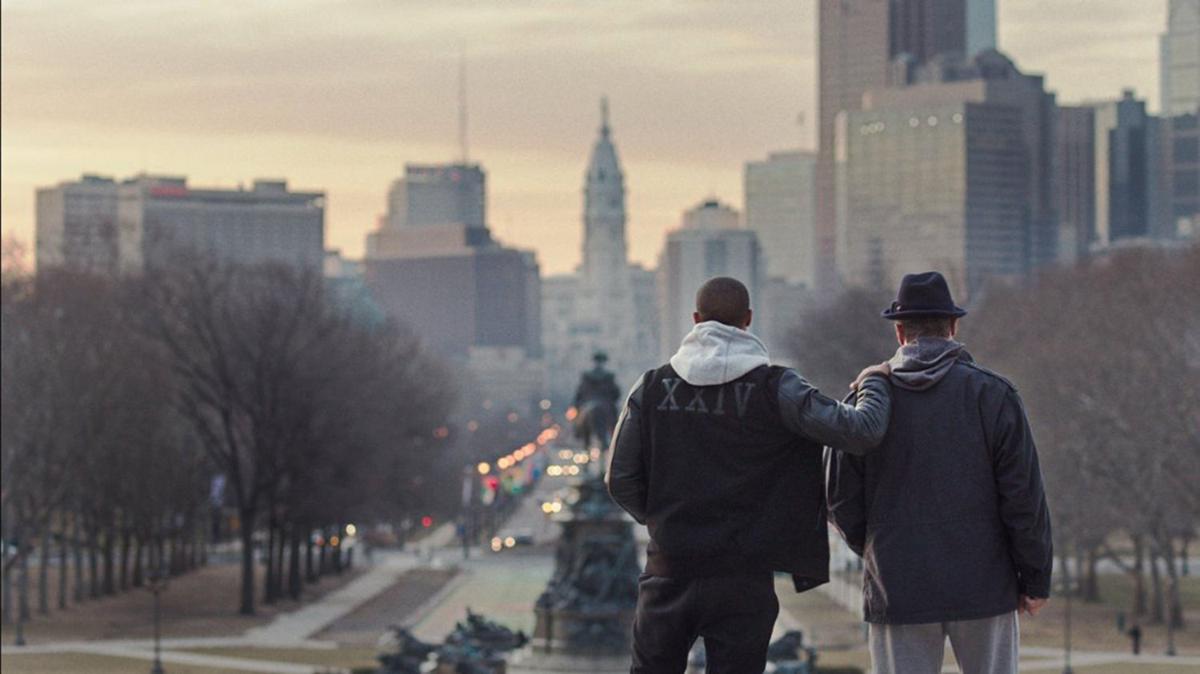 Creed understands this. The film benefits from a willingness to approach the material from a fresh angle. In July 2013, MGM announced it had signed director Ryan Coogler and Michael B. Jordan to develop the film. Coogler had only directed a single film to that point, the indie Fruitvale Station. While Jordan was a rising star following the success of Chronicle, he was no more established. Indeed, his other big project of 2015 would be Josh Trank’s misfiring Fantastic Four.

One of the more interesting aspects of Creed is how cautiously it treats the legacy of the Rocky films. The film centers on Adonis Johnson (Jordan), a young man who discovers that he is the illegitimate son of Apollo Creed (Carl Weathers), Rocky’s foe-turned-friend who died in the ring in Rocky IV. The question of legitimacy plays through Creed, as Adonis grapples with his father’s legacy and the question of whether he has any right (or any desire) to take the name “Creed” as his own.

Coogler reinforces this repeatedly. When Apollo’s wife Mary Anne (Phylicia Rashad) visits Adonis in the detention facility holding him, she stops the social worker before her surname can be uttered. When Mary Anne mentions that she was married to Adonis’ father, the young boy asks, “What was his name?” The movie’s title appears on screen, slowly fading in as the music swells. However, it will be nine minutes before anybody dares to say the name “Creed” aloud.

Adonis’ relationship to his absent father is a driving force within the film. He is initially hesitant to embrace the legacy. “I don’t have no father,” he tells Mary Anne when he first meets her. As an adult, when the boxing trainer Tony “Little Duke” Evers (Wood Harris) points out that Adonis’ father died in the ring, Adonis shrugs it off, “I don’t know him. Ain’t got nothing to do with me.” Early scenes that find Adonis living in his father’s Hollywood mansion suggest it is almost a prison of itself. 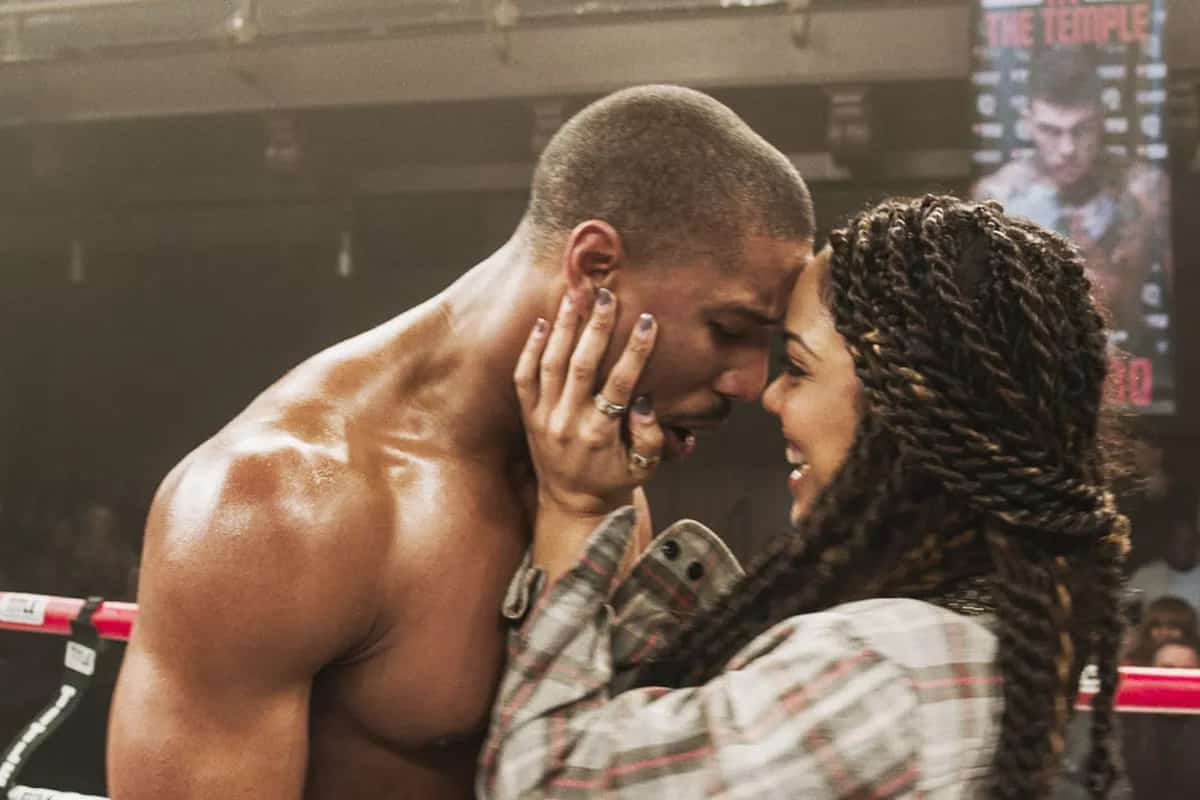 It helps that Creed knows better than to try to directly emulate or copy Rocky. The version of Adonis introduced in Creed is worlds apart from the character of Rocky established in Rocky. Rocky was a white working-class debt collector in Philadelphia, while Adonis is a black upper-class office worker in Los Angeles. Nonetheless, Adonis’ journey comes to parallel that of Rocky; they both use boxing to find a place in the world.

Adonis’ reluctance to embrace his father and his identity is mirrored in how Coogler structures the film. The movie introduces Adonis with two fight scenes, one as a child in the detention center and another in Mexico. These scenes are shot in long takes with handheld cameras, with no significant score on the soundtrack. Much like the opening scenes of Black Panther, they situate the film in a world familiar to Coogler, the modern low-budget naturalistic American independent film.

As the film develops, and as Adonis becomes more comfortable as both himself and as the son of Apollo, Coogler pushes the film towards the more conventional cinematic language of the Rocky franchise. The film’s second big fight arrives around the midpoint, a fight between Adonis and Leo “The Lion” Sporino (Gabriel Rosado). Coogler films this two-round brawl as an extended long take, similar to the opening fight scenes.

Again, this is Coogler demonstrating his indie cinema aesthetic; that match between Adonis and Sporino is as artful as the Rocky franchise has ever been. As cinematographer Maryse Alberti explains, the sequence serves an important purpose in terms of character and theme: “Once you’re in the ring, you don’t have teammates. You are alone. There’s no one to lean on.” It is an illustration of Coogler’s craft, a reminder that he is one of the best young American filmmakers. 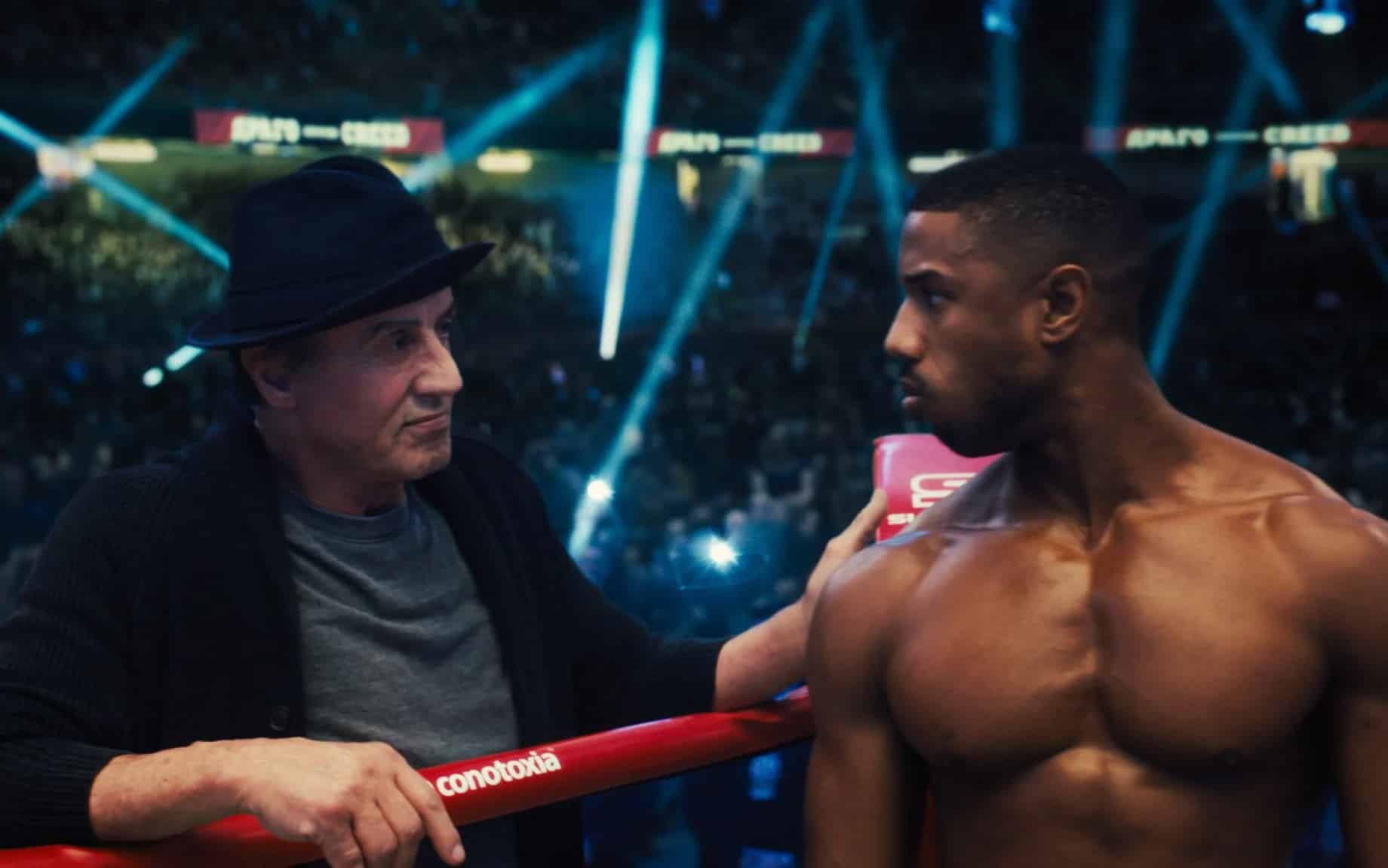 However, during that match, something interesting happens. Unlike the earlier fight, Coogler puts audiences inside the ring. Triumphant orchestral music slowly builds in the background, the kind of music that had – to this point – largely been reserved for scenes inside Apollo Creed’s mansion or featuring Rocky Balboa himself. Coogler even shoots the fight using a Steadicam rather than a handheld camera; the original Rocky was one of the first movies to use the technology.

Creed begins to feel more comfortable employing the cinematic language of a Rocky film, just as Adonis is forced to confront his parentage. Before the fight, Sporino’s father (Ritchie Coster) deduces Adonis’ father’s identity, and he leaks it to the press after Adonis wins. As such, Adonis is forced to confront his legacy, as well as determine how best to reconcile the man that he wants to be with the weight of his father’s reputation.

In conversation with his girlfriend Bianca (Tessa Thompson), Adonis concedes that his reluctance to embrace his father’s name does not come from any anger or resentment. Instead, it is respect and insecurity at appropriating the brand of “the most famous fighter who ever lived.” He confesses, “I’m afraid of taking on the name and losing. They’ll call me a fraud — fake Creed.” It is not hard to imagine Coogler himself grappling with the weight of making the seventh Rocky film.

However, Adonis learns that he need not be crushed by the weight of the mythos. “You are your father’s son, and you’re part of him, but it doesn’t mean you have to be him,” Mary Anne assures him. One of the film’s most joyful sequences comes when Coogler allows himself the indulgence of a classic Rocky training montage – but on his own terms. Adonis moves through the same working-class Philadelphia that Rocky did, but on his own terms. On the soundtrack, Meek Mill, Jhené Aiko, and Ludwig Göransson remix Bill Conti’s iconic score to create something unique for Adonis. 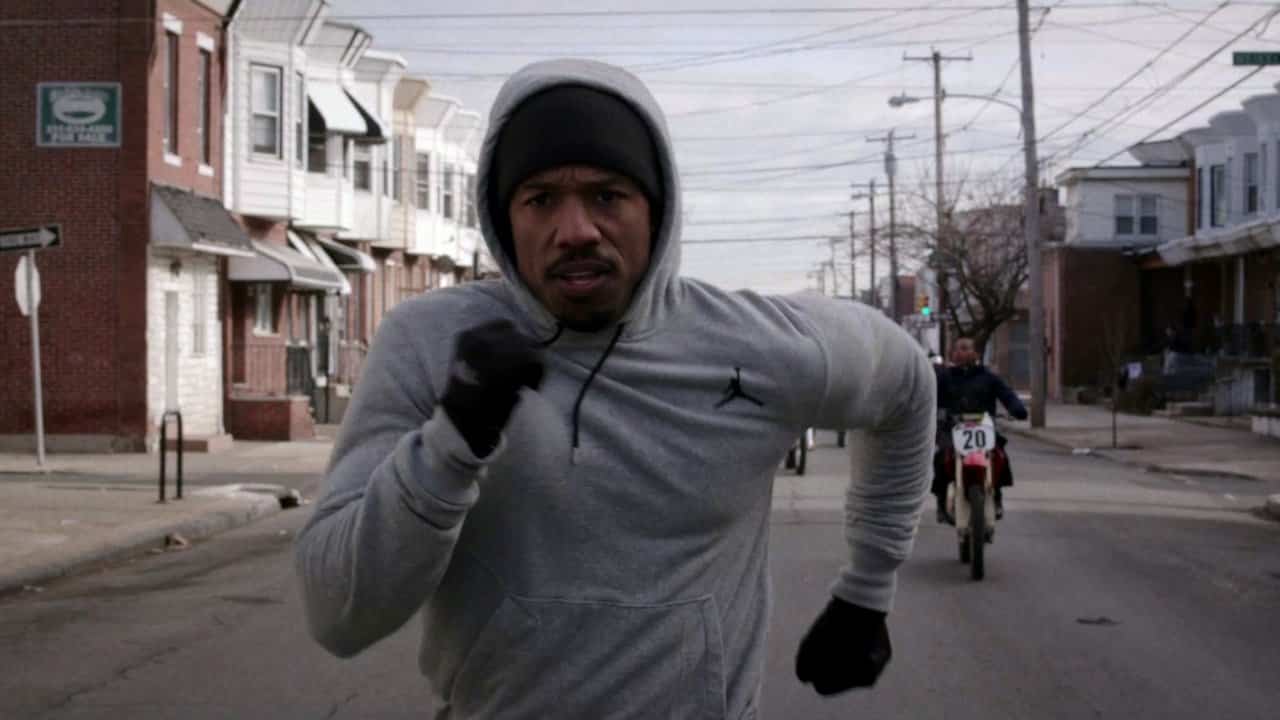 As Creed builds to its climax, it becomes clear that Adonis has reconciled the two halves of himself. As a gift before the final fight, Mary Anne sends him a set of red-and-white striped trunks to match those worn by his father. The name “Creed” is written on the front. However, the name “Johnson” is written on the back. It is clear that Adonis does not need to choose between being one thing and the other. He can be both his father’s son and his own man. Creed can be a Rocky film and its own thing.

Coogler reinforces this idea in the final match. Coogler follows Adonis into the ring in one of his trademark long takes. However, once Adonis enters the ring, Coogler trusts himself to make a Rocky film. The sequence is much more conventional in its editing. Bill Conti’s “Gonna Fly Now” and “Going the Distance” roar on the soundtrack. Coogler borrows several narrative beats from Rocky, such as Adonis picking himself up off the mat as his opponent celebrates victory and the fact that Adonis wins a moral victory while losing the fight itself.

As Coogler describes it, the film’s fight sequences tell a story of themselves. “We wanted them all to build up to the final moment when he kind of becomes who he was meant to be,” the director explains. This is the beauty of Creed as a legacy sequel. It is a film that does not take the mythic weight of the franchise for granted, but instead understands the importance of earning that title and that name. Creed plays as a metaphor for itself, charting the journey of becoming a Rocky film.

It does all of this without sacrificing its own identity and perspective, engaging with the complicated racial politics of the Rocky franchise and crafting characters who are compelling and engaging in their own right. The result is a movie that is not just a great Rocky movie, but a great movie in itself – just as Rocky was all those years earlier. As the announcer sums up in the wake of that final match, “He’s no longer just the namesake of Apollo Creed; he’s the living embodiment.” That’s true of both Adonis and Creed.