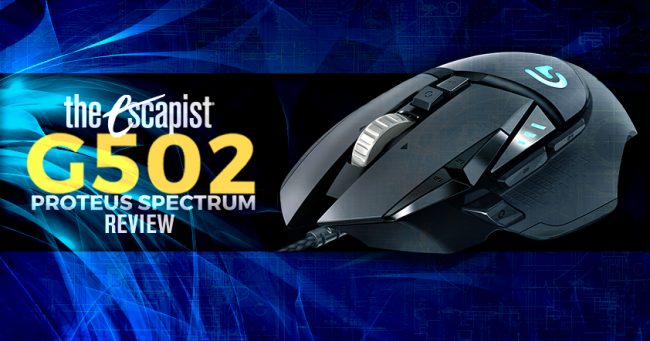 The Logitech G502 Proteus Spectrum is a refinement of last year’s G502 Proteus Core. It’s one of the most customizable gaming mice out there, boasting features such as on-the-fly DPI switching, customizable lighting and keybinds, and Logitech’s signature adjustable weights. It’s certainly a mouse for the hardest of hardcore gamers who want complete control over everything, but is it worth the hefty price tag?

My first experience I had with the mouse was soured by frustration at its customization program. While Logitech makes some great hardware, it sometimes struggles on the software side. I was able to plug-and-play the mouse with no issues, but had to download and install the Logitech Gaming Software to access the customization options. At first, the software straight up refused to recognize the mouse. After checking my settings and searching internet forums, I confirmed the software only detects the Proteus Spectrum when you open it as an administrator. Which was strange, considering the software could detect other Logitech products without any trouble. What frustrates me the most is that this isn’t anything new: I have had similar issues with Logitech software in the past.

Thankfully, once the software was able to recognize the Spectrum, actually customizing it was quite painless. You can fully customize up to three profiles which can be changed at the click of a button, and are stored on the mouse’s onboard RAM. This means you don’t have to keep the Logitech Gaming Software running in the background, which is good, because it’s a pretty big memory hog. You can assign commands and macros to all of the Spectrum’s 11 buttons, adjust DPI settings, and assign a color scheme from a full spectrum of 16.8 million colours. If you have other Logitech RGB products, you can sync up the color schemes, or match it to non Logitech products that happen to glow a certain color. You can even get it to cycle through random colours, which is pretty sweet.

You can also calibrate your mouse pad, which apparently increases accuracy and lowers the “lift-off” distance. I use a standard size black cloth mouse pad, and I didn’t really notice too much of a difference between having the calibration off or on, so I’m not sure how effective it is.

One of the coolest little features of the mouse is the ability to temporarily “down-shift” your DPI by holding down a button on the mouse. This is incredibly useful for shooters, as sniping generally works better if your DPI is a bit lower than usual. You can of course still shift your DPI up and down on-the-fly by using the regular DPI shifting buttons. The Spectrum also features adjustable weights, although I’m not sure they were necessary. Some gamers may want a slightly heavier mouse, but even with a full compliment of weights inside it the end-user won’t feel a measurable difference. The mouse already weighs a hefty 121g, so adding an extra 18g isn’t really going to do much considering its size. This is definitely a feature for the most professional of gamers, and more casual users can safely ignore it.

Speaking of size, the Spectrum is on the small side (at least, compared to my old Razer Deathadder), so it’s hard to grip if you have big sasquatch hands like me. Logitech boasts that it has easy-to-reach buttons, but despite my giant hands it was still quite hard to reach some of the furthest buttons – something I assume my small-handed brethren would have even more trouble with.

Thankfully, the mouse is surprisingly comfortable. Using it in a variety of games for periods of up to two hours didn’t cause my hand to cramp, and I never experienced any issues with accuracy or jerky movement. The mouse is incredibly sturdy, weighted, and doesn’t feel like it’s about to break any time soon. The buttons themselves pack a solid, satisfying click, and I was never in the position of being unsure if I accidentally pressed one.

Outside of games, the mouse works well when browsing the web or doing work. It’s easy to shift down the DPI, and the scroll wheel even has a lock that you can switch off, activating a free-rolling mode which lets you fast-scroll websites. A cool trick for web browsing: While holding down the “sniper” button, if you click your mouse wheel left or right, it will switch between your active tabs.

With all of this under consideration, the price tag on the G502 seems reasonable. Yes, it’s one of the most expensive corded gaming mice available, $10 more than a Razer Deathadder and $20 more than a SteelSeries Sensei. But it makes up for it with its sturdy build, customization options, and comfortable design.

Bottom Line: The G502 Proteus Spectrum is a study, solid mouse with a plethora of customization options, although the software that supports it is a little clumsy.

Recommendation: If you’re in the market for a high-quality gaming mouse that won’t fall apart after a couple weeks, the G502 is for you.