That the hobby of roleplaying grew out of the older hobby of wargaming is well known. The world’s first tabletop RPG, Dungeons & Dragons, proudly proclaimed its origins on the covers of its 1974 rulebooks: “Rules for Fantastic Medieval Wargames Campaigns Playable with Paper and Pencil and Miniature Figures.” In addition, D&D‘s text made frequent reference to Chainmail, Gary Gygax’s 1971 medieval miniatures wargame, on whose rules it depended to varying degrees. For example, D&D‘s now-standard D20-based combat system was, in fact, the game’s “alternative combat system,” as the rules originally assumed most players would be using it as an adjunct to Chainmail rather than as a game in its own right.

Nowadays, it’s easy to forget that wargaming, particularly of the “hex and chit” variety, was once a very popular pastime. The late 1960s and early 1970s — the years immediately before the publication of Dungeons & Dragons — represent a highwater mark for the hobby, when games of this sort could regularly sell hundreds of thousands of copies. While wargaming is still very much alive today, in terms of sales and popularity, it’s a shadow of its former self. Consequently, the history of this hobby and its influence on tabletop RPGs is not well known. What follows is not so much a full history of wargaming so much as an overview of some of the individuals whose creativity and designs shaped the hobby and, by extension, the roleplaying games that followed in their wake.

Von Reisswitz
Although games inspired by warfare have been around for centuries, games intended as simulations of warfare are a fairly recent innovation, often credited to the Prussian courtier Baron von Reisswitz. In 1811, during the Napoleonic wars, he created a wargame — or Kriegspiel in German — played on a sand table, which found favor in both his native Prussia and also in Russia. The baron’s son, Lieutenant Georg von Reisswitz, refined his father’s game and published it in 1824 under the lengthy title, Instructions for the Representation of Tactical Maneuvers under the Guise of a Wargame. Unlike the elder Reisswitz’s game, this new game was quickly adopted by the military for training purposes. Its rules were complex, carefully representing movement and combat. Dice were used to simulate random elements, such as morale, inclement weather, and the like.

Verdy du Vernois
Reisswitz’s game proved very popular and influential. One of its biggest proponents was Helmuth von Moltke, who had come into contact with wargaming while still a young officer. He founded a wargames club and even published his own journal dedicated to wargaming. Von Moltke became Chief of the Prussian General Staff in 1857, where he promoted wargaming as an important tool for training officers and preparing Prussian (and, later, Germany) for war. Moltke’s patronage resulted in the creation of a new set of rules by Julius von Verdy du Vernois. These new rules were more freeform than were those of Von Reisswitz. This necessitated the use of one or more referees — proto-Game Masters — adjudicate marginal cases not explicitly covered by the rules.

Totten
In the 19th century, many nations looked to Germany as a role model in military matters, among them the United States of America. Charles Totten, an American military officer, noted the importance of wargaming in the German military, and introduced it into the US. In 1880, he published Strategos: A Series of American Games of War. Totten’s wargames required the use of a referee, after the fashion of the then-current German paradigm. He used them to teach military tactics at the University of Masschusetts, West Point, and Yale University.

Jane
Nowadays, Englishman Fred T. Jane is best known for the publication he founded in 1898, Jane’s All the World’s Fighting Ships, descendants of which are still published today. What’s often forgotten is that the information Jane included in his periodical was intended to support a naval miniatures game also included with it, a revised version of which he published in 1905. 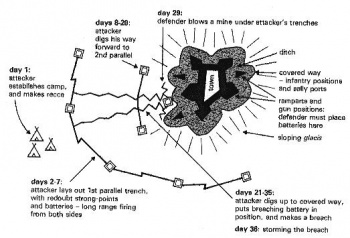 Wells
Yes, H.G. Wells was a fan of wargaming, believe it or not, and he wrote not one but two books devoted to his hobby. The first, Floor Games, was published in 1911 and isn’t so much a set of rules as a discussion of the theory and practice of miniatures wargaming. Wells played his games using toy soldiers and, unlike most of his predecessors, who followed the German style of simulation, he used small wooden projectiles to try and knock down the toy soldiers rather than a more abstract system based around dice and probabilities. Wells’s actual rules for wargaming appeared in 1913 under the amusing title of Little Wars: A game for boys from twelve years of age to one hundred and fifty and for that more intelligent sort of girl who likes boys’ games and books. Little Wars is considered by many the first set of wargames rules intended entirely for recreation.

Pratt
Science fiction and fantasy author Fletcher Pratt, whose writings were noted by Gary Gygax as one of the primary inspirations for Dungeons & Dragons, wrote a set of naval miniatures rules in 1940. They were a development of Jane’s earlier rules, but much more complex, using mathematical formulae to simulate a variety of different events and effects.

Roberts
Charles Roberts published the first set of mass market wargame rules in 1952, with his Tactics. It’s impossible to overestimate the influence this game had, as it introduced many of the mainstays of modern wargaming: hex maps, cardboard counters, and an odds-based combat results table, many of which were later adopted by roleplaying games. Roberts’s success with Tactics enabled him to found Baltimore-based Avalon Hill, the premier publisher of wargames throughout the 1960s and 1970s. Avalon Hill would also eventually publish roleplaying games, an irony given that it turned down the chance to publish Dungeons & Dragons before Gary Gygax founded TSR for that same purpose.

Korns
In 1966, Michael F. Korns publishes Modern War in Miniature, a set of World War II miniatures wargaming rules. The rules are interesting for a couple of reasons. Firstly, the game is geared toward small units, where individual soldiers, rather than entire regiments, play an important role. These soldiers are proto-RPG characters, acting as the “eyes and ears” of the players controlling them and giving them a perspective on the field of battle. Secondly, a referee was necessary to describe what each player saw and encountered through his soldiers, much in the same fashion as a roleplaying game’s Game Master.

Wesely
While in college, David Wesely was a member of the Midwest Military Simulation Association (MMSA), a wargaming group based in Minneapolis. In 1967, Wesely, inspired in part by Totten’s Strategos, ran a wargame set in the fictional 19th century German town of Braunstein. He served as referee and the players took the roles of important military and civilian personnel in the town. The rules for this game were loose and freeform and concerned themselves as much with diplomatic matters as with combat. At the time, Dave Arneson, co-creator of Dungeons & Dragons, was a member of the MMSA and participated in some of Wesely’s wargames, including a Braunstein variant set in a Latin American banana republic rather than Napoleonic Germany. Taking inspiration from this, Arneson created Blackmoor, a “fantasy Braunstein” setting that became the basis for the first roleplaying games campaign and a testbed for many of the concepts that would eventually became staples of the genre. The rest, as they say, is history.

It was a long road from 1811 to 1974 and it’s unlikely that Lieutenant von Riesswitz would know what to make of his Kriegspiel‘s descendants. Still, there are many elements of modern roleplaying games, including their own electronic offspring, that owe their existence to generations of military officers and aficionados, each adding new details and concepts in order to improve wargames to suit their needs — a process that continues to this day, as gamers throughout the world modify and house rule their favorite games.