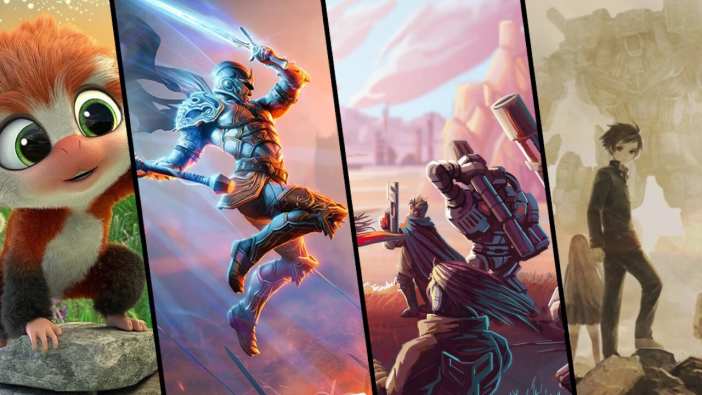 This month is absolutely full to bursting with single player games to choose from, but we are looking at four games in particular to watch out for in September: Kingdoms of Amalur: Re-Reckoning, Star Renegades, Tamarin, and 13 Sentinels: Aegis Rim. These were very hard to select, so if any of the other releases this month catch your eye, be sure to follow up with your own thoughts and perhaps recommendations too!

Here is hoping for everyone to stay safe and have fun gaming, whether it’s the single player mode of Marvel’s Avengers or one of the surprisingly many alien/robot action games soon to be released.

Following in the punny footsteps of Darksiders II: Deathinitive Edition and Red Faction Guerilla: Re-Mars-tered, THQ Nordic looks to right the wrongs of the past and revitalize Kingdoms of Amalur.

The unfairly rocky release and subsequent mud-dragging that happened to Amalur nearly a decade ago resulted in a stillborn franchise, a rather excellent western RPG with action combat that killed a studio and scuttled its ambitious MMO plans to boot. Now, Kingdoms of Amalur: Re-Reckoning is sprucing it up for 2020 with bug fixes, tweaked combat, a better frame rate, and a brand new expansion due next year.

Much like its spiritual cousin Dragon’s Dogma, Reckoning was a stab at the lucrative open-world fantasy RPG in the wake of Skyrim‘s massive success. Both games added a welcome helping of hack-and-slash play to the proceedings, more akin to a stylish action game such as Devil May Cry than the traditional first person combat of Elder Scrolls.

Of both games though, Reckoning was the one to buy fully into the Elder Scrolls formula. Similarly to Morrowind and Oblivion before it, in addition to sharing chief designer Ken Rolston, Reckoning boasts both a main quest and hours upon hours of stalwart fantasy side-hustles, from fighters’ guilds to warring houses.

It’s the sheer breadth of experience that makes Kingdoms of Amalur: Re-Reckoning such a welcome prospect today. With the added technological progress of eight years and both post-launch DLCs included, Re-Reckoning might be exactly the fantasy adventure that those waiting for The Elder Scrolls VI want to fall in love with. At the least, the single player game will certainly offer RPG fans a metric truckton of classic fantasy content, all wrapped up in a stylized presentation that holds up much better than those of its last-gen contemporaries.

Hopefully, this time around, the franchise will not be DOA.

Platform: PC (PlayStation 4, Xbox One, Nintendo Switch in the future)

This beautiful HD 2D space RPG comes from Massive Damage, whose long history of space strategy games bodes well for Star Renegades. With the newly revealed Octopath Traveler-looking visuals and deep roguelite mechanics, there looks to be something here for everybody.

The game’s turn-based battles play with time in a way that merges the nostalgic with the new, making “time damage” as important a tactical concern as health damage. Do enough time damage to some enemies and they will fall off the Grandia-style timeline, skipping their turn entirely — but there is only so much time that can be spent, and once it is, other enemies can become deadlier. Permadeath is also very much in play.

This is made all the more precarious by the out-of-battle mechanics that resemble other narrative roguelites such as Griftlands and Darkest Dungeon. There are NPCs to interact with, discoveries and items to be found, base management, and recruiting new characters to fill the shoes of your dearly departed allies. There is even an Intelligent Adversary system of “elite” baddies to battle across the universe that evolve and receive promotions.

Like with Into the Breach, the excellent presentation and mechanical depth of Star Renegades seems poised to welcome a whole new crowd of strategy fans to the fold, but the game has the grit and hard choices that should endear it to seasoned players as well.

If you are surprised to hear that, apparently a lot of people are; Jet Force was not the greatest commercial success in its time, with some wonderful music and cool sci-fi levels marred by repetition and overstaying its welcome.

Luckily, there is no reason for those problems to befall spiritual successor Tamarin. When first revealed, trailers mostly hid the shooting aspect, focusing on cute animal platforming and collecting shiny things.

The new trailers have no such compunctions, revealing the game to be an alien bug shooter in the first 30 seconds. Will the game itself spend much longer pretending that it is merely a cutesy platformer? We can find out in less than two weeks.

Having basically conquered the realm of arcade Dungeons & Dragons beat-‘em-ups with Dragon’s Crown (give or take a few poor-taste character designs), game director George Kamitani wrote 13 Sentinels to be a departure from his usual fantasy style.

Brought to us by Vanillaware, who also developed the excellent Odin Sphere and Muramasa: The Demon Blade, the single player game combines 2D adventure game mechanics across 13 interconnected storylines with real-time strategy action.

Though it was originally set to be a multi-platform release across PlayStation 4 and PlayStation Vita, the Vita version has since been canceled, making the title one of the PS4’s last exclusives before the new consoles arrive.

After spending a long five years in various stages of development (including, apparently, a potential Transformers-esque toy merchandise version), 13 Sentinels is finally ready to wow English speakers with its hybrid adventure game/RTS mechanics.

Sept. 17 — The Dungeon of Naheulbeuk: The Amulet of Chaos (PC)

As a result of release date shifts and the cancellation of E3, there are other games set to release soon that lack firm release dates. Hopefully not too many release dates will be forced to move next month, but until the next batch of single player games, enjoy!