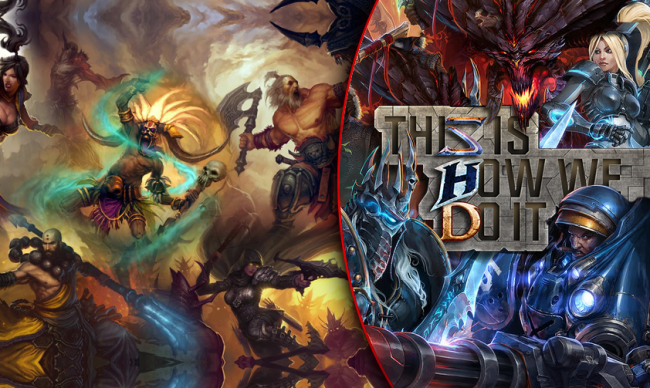 Check back in the future for updates to this guide! Last Updated: August 28.

New to Diablo 3? Having a tough time handling Torment 6? Or are you just looking to make sure you already know everything there is to know about this game? What we’re building here is a comprehensive guide on taking you from beginner to expert as quickly as possible. This is your crash course in all important things Diablo 3. This is what you need to know about the journey from level 1 to 70, the pre-Torment hurdle, the Torment purgatory, and finally the end-game marathon.

Ready to take your game to the next level?

This is how we do it.

The opening phase of the game is your race to level 70. If this is your first time playing Diablo 3, then you’ll have to complete the campaign before you can unlock Adventure Mode, which is where you’ll be spending the rest of your game time – and, arguably, where the fun really begins.

If you want to be as efficient as possible, then Adventure Mode is your ticket to the fastest level 70 completion times. While it may be tempting to play through the campaign on higher difficulties for greater challenge and reward, you will net greater rewards by speeding to Adventure Mode as quickly as possible. If you already have Adventure Mode unlocked, you can hit 70 in about five hours, without any outside help, by following some strict guidelines:

If possible, play in a party. The bonuses from +XP gear is now shared party-wide; plus, you will naturally kill monsters quicker with four players in a party because you’ll be dealing four times the damage, but with the way monster scaling works, your enemies will have less than four times the amount of health.

Phase 1 is where your hero is born; phase 2 is where he is bred. Level 70 is where your journey really begins; everything before this point was just a warm-up exercise.

The first thing you’ll want to do is either find or create a starter build – a build for each class is presented on the following pages. What you’re looking for is synergy among your skills – skills that share the same elemental damage type or that work well together, such as by triggering each other.

Note: You will want to enable Elective Mode in your game options in order to have the freedom to assign (almost) any skill to (almost) any keyboard or mouse button.

Thereafter, you want to gear up as quickly as possible with best-in-slot Rare items. This will be accomplished through a combination of crafting items at the Blacksmith, Enchanting them at the Mystic, gambling for them at Kadala, as well as simply finding them as loot. 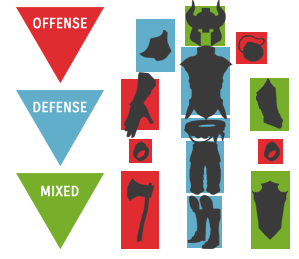 As you progress into end-game builds, there is a lot more nuance to this system, but as a general rule, you need to maximize your damage at this phase. For a complete rundown on each slot, check out this video playlist.

Check back in the future for more guides on gambling, enchanting, and more.

This lightning barbarian build focuses on keeping Whirlwind up for as long as possible and activating Wrath of the Berserker to deal with Rift Guardians and Champion/Elite packs.

Weapon Throw offers Fury generation and the flexibility of a ranged attack in case you need to avoid poison pools, attacking a retreating target, or attack while locked down by a jailer, but it can easily be swapped for another generator without affecting the build. 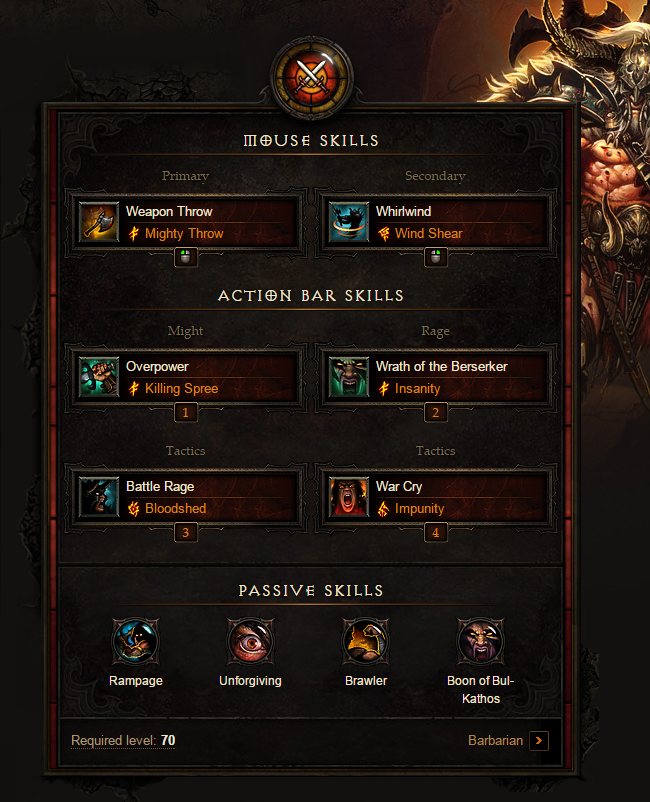 This Crusader build revolves around maintaining a high block chance with Punish: Retaliate in order to regain Wrath with the Insurmountable passive. Blessed Shield is your main attacking power, Shield Glare helps with Wrath management, Condemn clears up packs of enemies quickly, while Heaven’s Fury and Akarat’s Champion are perfect for fights against Rift Guardians, bosses, as well as Champion and Elite packs.

Plus, being Holy-based, this build positions you well to migrate into one of the popular Holy-based end-game builds. 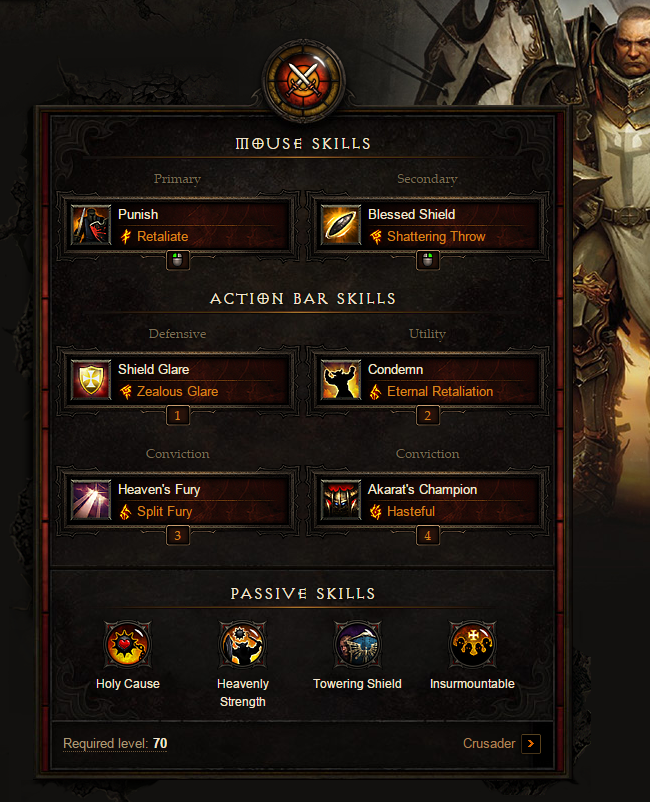 This Demon Hunter build focuses on the high damage output of Cluster Arrow, relying on Bat Companion, Preparation: Punishment, Vengeance: Seethe, Entangling Shot, Night Stalker, and Blood Vengeance for hatred generation in order to keep pumping out Cluster Arrows. Entangling Shot should be fired on an enemy before Cluster Arrow in order to trigger the 20% increased damage from your Cull the Weak passive.

This build transitions well into a fire Marauder end-game build. 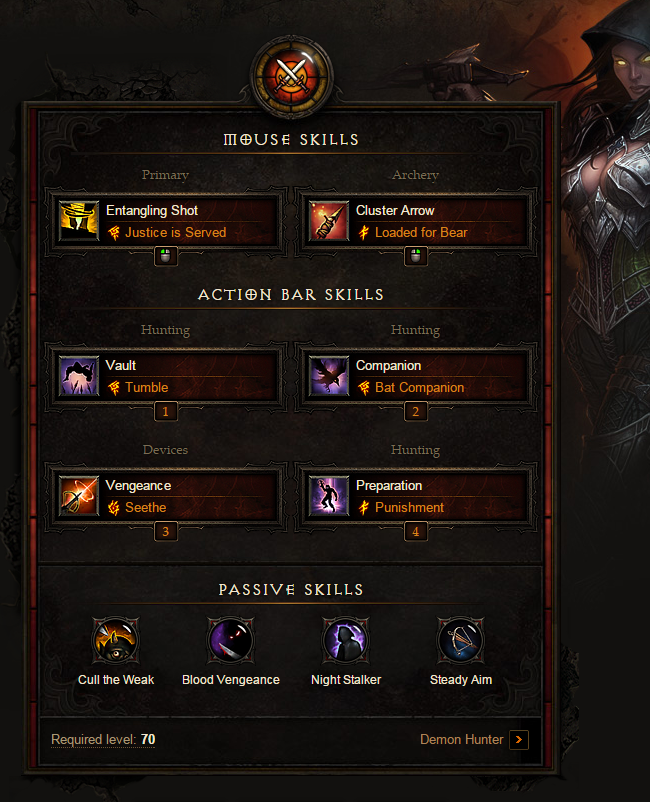 This Monk build makes use of high Attack Speed and Critical Hit Chance in order to rapidly regain Spirit with Way of the Hundred Fists and trigger Cyclones from Sweeping Wind. Try to keep Sweeping Wind up as much as possible, pull in enemies with Cyclone Strike, apply Exploding Palm to groups of enemies, pop Mantra of Conviction during Rift Guardian and Champion/Elite fights, and use Dashing Strike as your mobility and escape power.

This build transitions well into a lightning Sunwuko end-game build. 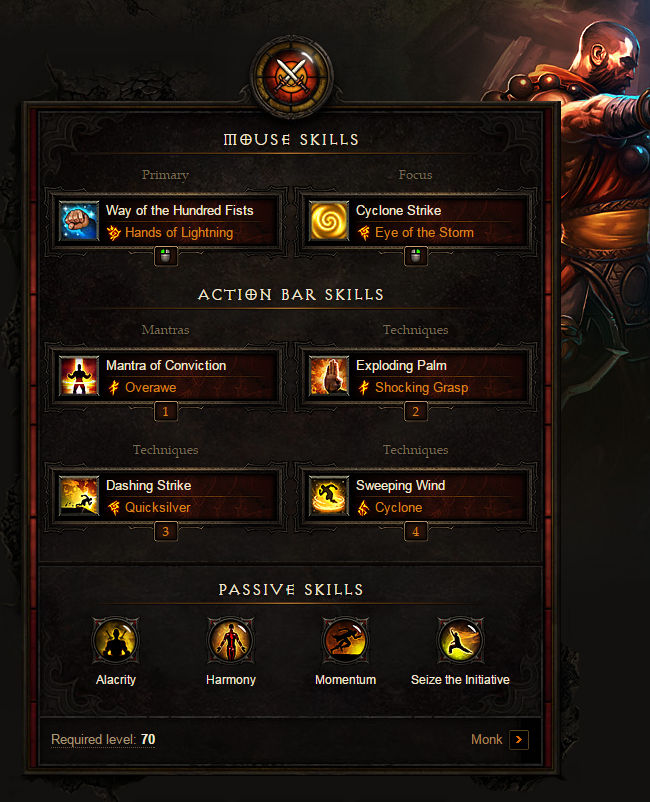 This pet-based Witch Doctor build revolves around Zombie Dogs and Fetishes. Plague of Toads is cast to trigger your Fetish Sycophants passive and summon Fetishs, Big Bad Voodoo: Slam Dance will see your army of minions tear through Champion/Elite packs and Rift Guardians in short order, Piranhado serves as a damage buff and crowd-control utility, and Grave Injustice will enable you to cast your heavy-hitting spells more often.

You ideally want to try to maintain the maximum possible number of summoned Fetishes at all times, because that is when your are hitting your maximum damage capacity. 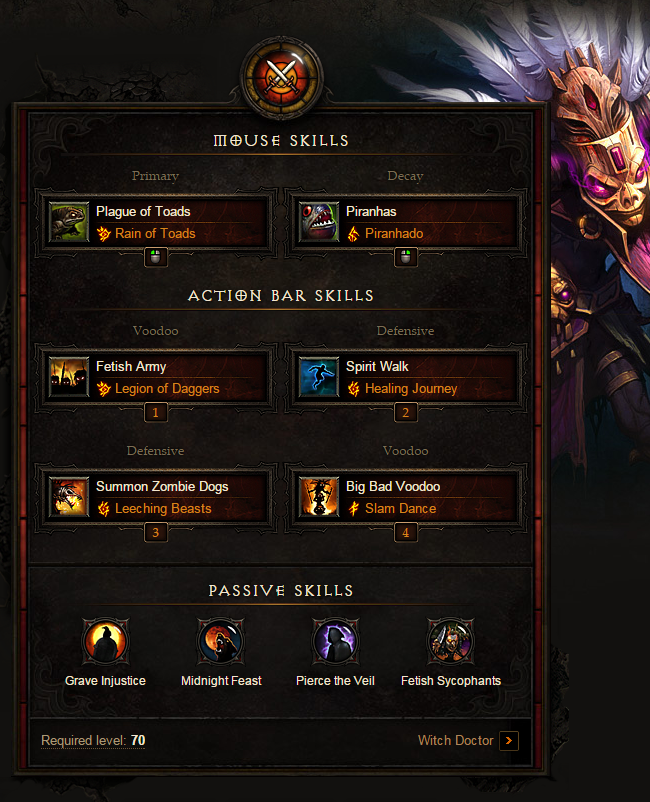 This Wizard build focuses on boosting the damage output of Mammoth Hydra while controlling the battlefield with an arsenal of spells. The Illusionist passive will allow you to cast Mirror Image: Duplicates more often, and with four duplicates each casting all of your battlefield-control powers, enemies will almost constantly be frozen with Frost Nova, sucked into Black Holes, or find themselves in the target area of an Energy Twister. The Conflagaration passive will cause enemies hit by most of these effects to take more damage as well.

This build positions you well to transition into an end-game Firebird’s build. 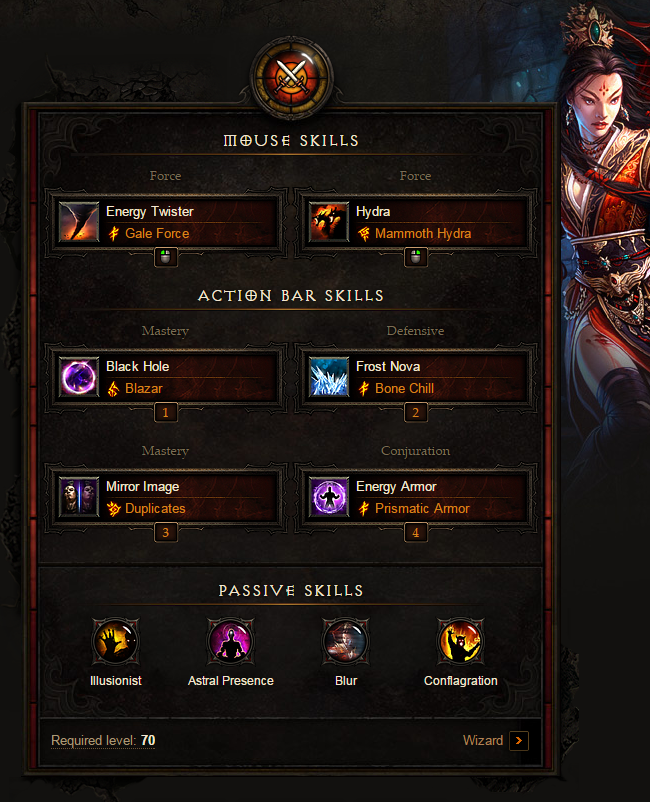 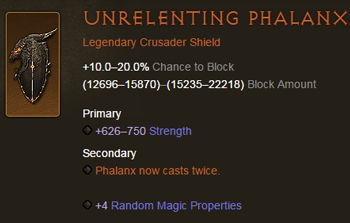 You have your basic build, you have your best-in-slot rare items, and you are comfortably farming the early Torment difficulties. Now begins the hunt for the gear that will let you into the end-game.

Along this journey, you will begin replacing your Rares with Legendary and Set items, but don’t be tempted to replace your Rares too soon. A Legendary item is not automatically superior to a Rare. In fact, a best-in-slot Rare is often better than a Legendary – the Legendary needs to roll the correct attributes, just like the Rare.

Of course, there are exceptions for Legendary items with special attributes that will help you significantly. Take the Unrelenting Phalanx shield, for instance, which causes a certain power to cast twice for the resource cost of once. This effectively doubles the damage of that particular attack, making an Unrelenting Phalanx with poorly-rolled attributes superior to any Rare shield. These examples are few and far between, however.

At this phase of the game, you want to set your eyes on a particular end-game build and begin hunting for the items that build requires. The vast majority of these builds, for instance, revolve around one of the class sets:

As you find the pieces you need for your end-game build, do not equip them right away unless they are an upgrade to your current gear. End-game builds are designed with the assumption that you have all the required gear, and without specific gear pieces, it is generally better to stick with your starter build. Instead, keep the required gear pieces in your stash until you are ready to equip the full set.

Once you do have all the gear you need to take advantage of your full set bonus, at this point you want to equip your gear pieces, even if they are – individually – downgrades relative to your current gear. In general, even the most suboptimally-rolled set items will be superior to the best-rolled Legendaries, because the end-game set bonuses are incredibly powerful and vastly overshadow the damage output of a character without one of these sets. Now, you can handle Torment 6.

Check back in the future for more pre-end-game guides, including Legendary Gem farming, Ring of Royal Grandeur farming, and more. 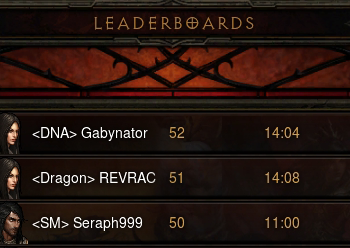 Upgrade your Legendary Gems in Greater Rifts. Run Uber bosses to craft Hellfire Amulets. Farm Act 1 Horadric Caches to get the perfect Ring of Royal Grandeur. Gamble at Kadala and Enchant at the Mystic over and over until you’re fully decked out in perfect gear.

Welcome to the grind.

Check back in the future for end-game guides, including builds, Hellfire Amulet farming, and more.