Today I thought I’d do something a little goofy. Instead of looking at Top 8 lists and examining what cards are seeing the most play, how about looking at cards that no one is playing?

We all have them and like hoarders we can’t quite bring ourselves to get rid of them. I’m talking about those random rares that take up space in your trade binders and card boxes. Maybe you just like collecting them or maybe you’ve been burned in the past by some obscure card suddenly becoming valuable – damn you [mtg_card=Porphyry Nodes].

Rather than simply collecting dust buried in the bottom of your collection, let’s see if we can’t breathe some new life into these unwanted cards. I’m going to be randomly selecting a card with the following qualifications. The card will be a random rare or mythic in the Modern card pool, since I want to keep it somewhat likely that you actually do have that card lying around and rares/mythics tend to be the most interesting and complex cards. It will also be under $5, because chances are if it’s over that then it’s actually worthwhile and where’s the fun in that.

Cue the fanfare and the slow clap, because our first card is – 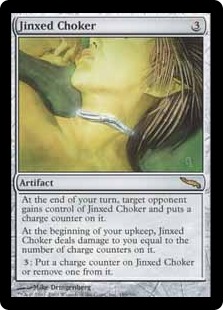 Throughout Magic’s history there have been a few of these clock cards. Their basic function is to put a time limit of sorts on the game by steadily dwindling life totals. There has been recent fair like [mtg_card=Havoc Festival], though perhaps the gold standard and most heavily played one is [mtg_card=Sulfuric Vortex]. What’s often the issue with these cards is that between you and your opponent, one of you is using up a card on this. So you really want to ensure your deck is going to win the race. [mtg_card=Jinxed Choker] throws another wrinkle in by letting players ratchet the effect up or down.

So as mentioned, decks that are interested in this kind of effect are usually just going to turn to [mtg_card=Sulfuric Vortex]. Where I see [mtg_card=Jinxed Choker] having the most potential is Commander, EDH. Or at the very least another Highlander format where you wouldn’t just run other better options. Granted it doesn’t have a place in super competitive groups, but if your Commander group is a little more laid back, there is one thing [mtg_card=Jinxed Choker] is really good at – getting the politics going early. No more sitting around like the Cold War trying to build up without looking too threatening, this [mtg_card=Jinxed Choker] getting passed around is going to cause little conflicts. I for one prefer when my Commander games are not four hours of mutually assured destruction just waiting for someone to over step.

With infinite, or simply enough, mana you can also use it to start [mtg_card=Fireball]]ing opponents out of the game. Note that in a multiplayer scenario when a player leaves the game they return control of any permanents they don’t own, so whoever passed the [mtg_card=Jinxed Choker] will get it back. So you may want to pair your [mtg_card=Jinxed Choker] with some kind of effect to negate damage or leave open enough mana to ratchet it back down in response to the upkeep trigger.

Here are some cards to consider pairing up with [mtg_card=Jinxed Choker]. [mtg_card=Doubling Season] and [mtg_card=Contagion Engine] can help to ramp up the counters more quickly, in addition to various infinite mana combos. You could also use cards like [mtg_card=Leyline of Sanctity] or [mtg_card=Witchbane Orb] to make yourself an invalid target to gain control of it. In addition you could simply prevent the damage with cards like [mtg_card=Circle of Protection: Artifacts] or using [mtg_card=Pariah] on an indestructible or regenerating creature.

If you were forced to make a deck with [mtg_card=Jinxed Choker], what would you build?