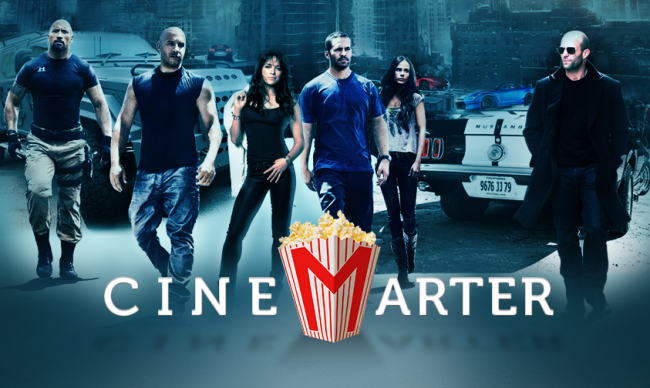 Furious Seven did something that I never thought a Fast and Furious movie would do, as well as something that one hadn’t before even come close to pulling off: it made me cry. Yes, for the first time in the franchise, genuine emotions are going to be felt by its viewers. Sure, it happens because the film’s final scene acts as a touching tribute to the late Paul Walker, who died during production, but that doesn’t make it any less stirring. Everything about Furious Seven‘s final scene is perfect, and even if you’re not a fan of the series, it’s almost worth seeing just for that – as a final send-off for an actor and his most famous character.

How’s the movie before its conclusion? Well, it took seven movies, but the Fast and Furious team has finally made a genuinely great one. Yes, Furious Seven is a ton of fun from start to (almost) finish, and then concludes with one of the most touching scenes you may see in theaters all year. To call it a “masterpiece” would be to oversell it, but given that it contains at least the three best action scenes that this franchise has, it does stand heads-and-tails above any of the other Fast and Furious movies. 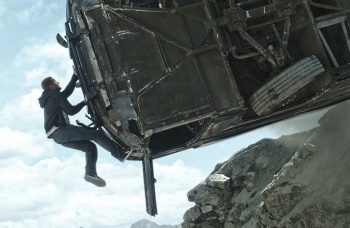 In case you’re just jumping in, Furious Seven stars many of the same characters from earlier films – primarily the staples from the previous two films. Dominic “Dom” Toretto (Vin Diesel) is the leader of a crew of – you can’t even call them “street racers” anymore, can you? – criminals who do bad things but look comparatively good because they’re done to worse people. His best friend and driving mate is Brian (Paul Walker), who married Dom’s sister, Mia (Jordana Brewster), with whom he has one child and another on the way. Roman (Tyrese Gibson) is another good driver who in this film serves as comedy relief, Tej (Chris “Ludacris” Bridges) is a tech expert, and Letty (Michelle Rodriguez) is Dom’s amnesic girlfriend. They sometimes team up with Luke Hobbs (Dwayne Johnson), a bounty hunter who was hired to catch them all in the fifth film, but grew to respect them.

If you stayed through the end of Furious 6, you know that a man named Deckard Shaw (Jason Statham) is out for revenge after the team took out his younger brother, Owen (Luke Evans), in the last film. Deckard is a former military man who was trained so well that even 20 other military men couldn’t take him out. Now he wants revenge on Dom and his crew. The co-villain is Jakande (Djimon Hounsou), who captures a hacker named Ramsey (Nathalie Emmanuel) in order to access a magical MacGuffin. Mr. Nobody (Kurt Russell) hires Dom and his crew to rescue Ramsey and retrieve the MacGuffin, promising that he’ll help them find Deckard in exchange.

It took seven tries, but we’ve finally got a Fast and Furious film that is, without a doubt, a very good movie.

To those who haven’t been keeping up with the series – in particular, the last two, maybe three, installments – that’s all going to sound complicated. And for a franchise that was initially all about how cool cars are, it is. But, starting with Fast Five, it evolved past that. These are now pure action movies that use cars in large roles. Furious Seven marks the first time that’s been done to near-perfection.

The last two installments each had one or two signature action scenes, each one topping the next. But between them, there was very little going on. Vin Diesel would talk about how important family was, there would be some plans made, and so on – but there was a lot of downtime. Furious Seven decides to go in a different direction: wall-to-wall action. From the first scene right up until the last, we get bombarded with action. What little downtime we do get comes as a relief – nonstop action does get relentless after a while – and while nothing new gets preached during them, they matter more.

Part of the reason it works better is because of the villain, Deckard Shaw, who is looking to get revenge for his brother. As such, he’s representing similar themes to Dom and his crew. All of the other movies have had Dom’s family values overcome people who thought in opposite ways. Here, they’re against someone else fighting for his family. That Jason Statham is playing a hybrid of his characters in The Transporter and The Mechanic – and just that he’s Jason Statham – helps give the villain even more credibility. The stakes have been raised and for the first time it feels as if multiple characters might not make it out of this alive.

Of course, this would all go to waste if the action wasn’t great. Thankfully, it most certainly is. The action scenes are bigger than ever – which is saying something given what we got in the last two movies. There are incredibly lengthy sequences that could have been severely mishandled, but thanks to director James Wan (Saw, Insidious, and The Conjuring) they’re all easy to follow and incredibly entertaining. Top it all off with the touching tribute to Paul Walker, and you’ve got yourself, by far, the best movie in the series. It took seven tries, but we’ve finally got a Fast and Furious film that is, without a doubt, a very good movie.

Bottom Line: Furious Seven is far-and-away the best Fast and Furious movie. It has the best action, the most menacing villain, an incredibly touching conclusion, and despite running for over two hours, doesn’t feel long at all.