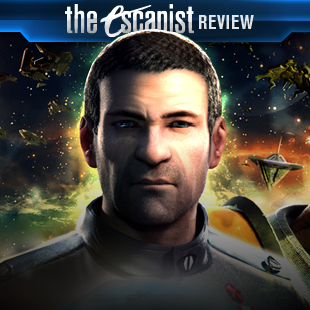 Galactic Civilizations III is a hardcore turn-based strategy experience and the Mercenaries DLC works well at keeping the gameplay balanced while expanding on what is offered. You should read Jon Bolding’s review of the base game to understand the full depth of what you can expect as a foundation to this expansion. Simply put, Galactic Civilizations III is a 4X turn-based strategy game where you explore deep space in the year 2242. You expand your faction’s territory by colonizing planets across a vast hexagonal grid map. Next you exploit the resources on your planets to build a fleet of warships. Then you take those ships and exterminate all who stand in your way.

Since launch, Stardock has implemented bug fixes and stopped crash problems, tweaked game balance, and generally made the galactic conquest experience more enjoyable and streamlined. Galactic Civilizations III: Mercenaries is the biggest update since May 2015, bringing the game to version 1.6. The balance of power stays intact, but pushes the limits of space war with a new military factor.

The standalone campaign mission in Mercenaries introduces the Bazaar feature, and explains why the store exists. It takes place after the events of the base game – the Terran war shifts the Drengin’s attention to Earth and leave their empire vulnerable. The Torians seize this opportunity to escape enslavement and embark on a conquest. The mercenary army of the Galactic Bazaar come in the Torian’s hour of need, appearing to be the best hope for success. Though it’s good, you might have wanted more than just one campaign for a full expansion.

The Bazaar allows you to hire elite mercenary ships in exchange for money and resources. Each merc ship has a name and personal history to it. For example, Prince Viturian helms The Sabre. He left home to find fortune and invested in beam weapon technology to rule the galaxy by force. The Retribution captained by “The Lash” seeks revenge for the murder of their queen. It’s a nice touch to the mercenary system that makes each ship unique. The names and backstories of the ships coincide with the stat bonuses they have.

The merc ships carry a lot more firepower than average vessels, and to further their edge, come with special bonuses. They range from ignoring enemy damage types, to low logistical cost, to faster travel. Other ships provide fleet bonuses that boost damage or make every other ship more evasive. The most expensive merc capital ships come equipped with a fleet of their own fighters.

These hero unit benefits make the Mercenaries bazaar feel overpowered, but the trade-off to all of these powerful merc ships is that every faction has access to them. There’s also only one of each merc ship per game at a time, meaning your opponent can buy it before you.

The newest playable civilization added in Mercenaries is the Arcean Empire. Their people suffered decades of war, wary of the leaders that try to restore their dominion. The Arcean racial abilities give them a 10% bonus to weapon damage and a 10% reduction of incoming damage. Their starbases also have a larger area of effect, and slow down incoming enemy fleets. The traits of the Arcean Empire center around ships and warfare. This increases stats in areas like logistics, sensor range, and the success rate of planetary invasions. The Torians, from Galactic Civilizations II, also return, and the campaign mission is centered around them, but I found the Arceans were more interesting because they added a second wholly militaristic faction to the game.

Galactic Civilizations III: Mercenaries compliments the base game’s vibe of turn-based grandiose 4x combat. The Bazaar feature adds a level of satisfying power to your faction, but that new strength balances out by making the same store open to your enemies. While the campaign is short, the expansion’s new content is enough for those who really enjoy setting up a galactic sandbox and trying to conquer it.

Bottom Line: This expansion for Galactic Civilizations III is a solid gameplay update that introduces the ability to buy merc ships, overall adding to the long war space battles that the base game introduced.

Recommendation: Any turn-based strategy fan shouldn’t miss out on Stardock’s take on the genre and Mercenaries proves that point.