Several metric yonks ago I devoted this column to a brief glossary of elitist asshole game critic buzzwords, and one of those was “focused.” Meaning a game that concentrates on making a few things spectacular rather than splash out all over the place and make a big mess. This can apply to both gameplay mechanics and story. Halo has simple gameplay mechanics and a big massive epic story that I could give a shit about, whereas a game like System Shock has overly complicated gameplay with a tight and interesting story.

After playing The Bastion and realizing how much I’d enjoyed the story aspect, it occurred to me that virtually every game I consider well-written demonstrates good focus in the story department. The running theme seems to be that they concentrate on a small group of characters with intriguing personalities and motivations, all mutually connected to the central plot. Silent Hill 2: James Sunderland only encounters four other characters in his journey, all of whom reflect a facet of the darkness inside him. Prince of Persia: Sands of Time: the Prince’s actions result in the deaths of everyone except himself, Farah, and the scheming vizier, all of whom desire the Dagger of Time and have their own ideas of how to fix everything. This tight focus allows the game to establish its characters without having to fall upon obvious tropes like “because he’s the bad guy.” Even the evil vizier’s desire for immortality is shown to be motivated by his constant coughing up blood.

Conversely, games that attempt to have huge sweeping epic stories about multiple factions fighting for the future of all lifekind tend to fall kind of flat for me. Often they fall victim to the George Lucas fallacy that sheer spectacle is an adequate replacement for interesting characters. I don’t care if your wisecracking action hero must overcome a speeding train full of angry bears by doing a triple backward sommersault while firing rockets – none of it is an ounce as interesting as a character overcoming their own flaws, and when I say “flaw”, I mean a flaw that actually gets in the way of their effectiveness, not a flaw like “does not respect authority” or “has gung-ho tendency to run back into danger to rescue allies” or “can barely see over his own pectoral muscles.”

I guess the problem with games, one I’ve mentioned before, is that it’s hard to make a character flawed when gameplay necessarily depends on them succeeding at every turn. On the other hand, player-protagonist disconnect can make overcoming flaws all the more interesting. Lately I’ve been contemplating the notion of a main character with a phobia that’s worked into gameplay – e.g. a hydrophobic character who slows to a crawl and loses all stamina when they move through or near water. In that case the player would be all the more invested in helping the character overcome their fear, since it impacts the player’s fun, and any later misfortune the character undergoes would invoke the player’s sympathies all the more since the two of them have had to work hard together to get to that point. 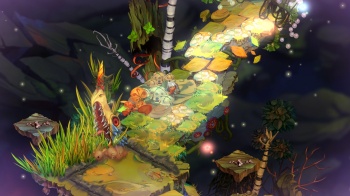 But I digress. It’s a particular sign of bad writing if the plot has to rely solely upon averting the destruction of the Earth or the entire human race – in other words, causes that a human audience that lives on Earth can automatically support. It just shows that the writer doesn’t have the ability to create a character sympathetic in themselves that we want to root for. This is the reason that I find a lot of the new Doctor Who hard to watch, because all the big amazing epic episodes just seem to be about the Doctor having to save the whole planet. And the more times you fall back on that, the less weight it carries. After a character has saved the universe five times it’s hard to feel that they’re genuinely threatened by a dustbin with a gun.

This doesn’t mean you can’t have big grand apocalyptic elements, as is demonstrated by The Bastion. Superficially, the story is about a mysterious Calamity that reduces the world to rubble, leaving the last few survivors to scrape together some hope for the future of society. Now these are big themes on a big scale, but it’s all going on in the background. Front and centre are the four main characters and the struggles they have with each other. Importantly, the major events (and retroactively some of the ones that led up to the disaster in the first place) are all rooted in the decisions of characters based on their agendas and personalities, not left up to faceless organizations or circumstance. Better that a character decide to go into the basement in pursuit of his goals than for the ground to simply crumble beneath his feet.

More relevantly for the interactive storytelling, The Bastion gratifyingly does all this largely within gameplay, not relying on cutscenes (except one or two little ones). Mostly this is done through the sexy (and possibly unreliable) narration, but there’s an entirely dialogue-free sequence near the end that stays with me in particular. For reasons I won’t spoil, the hero makes a sacrificial gesture that means he has to move slowly through enemy territory without the ability to attack or defend. All you can do is neck health potions as rank upon rank of enemies pour projectiles into you.

But after a while, they stop firing, one after another. They just watch you. As you make the final slow, painful steps to the exit, a horde of enemies watch from the higher ground, weapons still aimed and poised to fire. At one point, one of the enemies gives into tension and starts firing at you again, but he’s slapped down by his leader, and the rest of the army watches as you leave unmolested, silent in appreciation for a selfless act of nobility.

What needs to be taken away from this is that it’s all done within gameplay, never subtracting direct control of your movements and health potions. The enemy leader slaps down his twitchy underling with the same melee attack he’d have used on you in the field of battle. This, good listeners, is interactive narrative. A thousand words of story told in a few select gestures, backed by all the context of everything that’s come before it, and trusting you to notice it without going to cutscene or taking away camera controls. It’s all rather humbling, really.

Oh yeah, I reviewed From Dust too. Erm. Hey, dropping rocks on people is keen.