About a month ago I was walking through the electronics department of my local Walmart. As I usually do when I visit everyone’s favorite evil big box retailer, I took a moment to peruse the store’s movie section. It might sound silly when we live in the age of internet shopping and free two-day shipping, but there’s something I still really enjoy about browsing through physical DVDs. Sometimes you just come across things you weren’t expecting.

This was one of those days. As I looked over the displays, my eyes settled on a DVD box with a familiar winged humanoid adorning its cover. “Gargoyles: Season 2, Volume 2,” it read. “No effing way,” I said, more loudly than I meant to. Ignoring the perplexed look of a nearby sales clerk, I scooped up the DVDs and scrambled to the nearest checkout as if someone was going to steal them from me if I didn’t buy them fast enough. I then took them home and, after my daughter went to sleep, settled in for a fresh binge viewing of my favorite childhood show.

For the uninitiated, Gargoyles was created by Disney and first aired back in 1994. Focused on a clutch of a time-displaced gargoyles, it followed their adventures after they awakened from a 1000-years of magic-induced sleep and find themselves trapped in a world and time they don’t understand. Led by the noble Goliath, the show explored their struggle to find purpose and acceptance in a world dominated by a humanity that once betrayed and nearly destroyed them.


While this concept is pretty cool on its own, what made Gargoyles so memorable was the complex and mature way that it handled its storytelling. While the third season was so widely reviled that even Disney tends to disregard it, the majority of the (canon) show was spent developing an ever-evolving story that grew and changed with each episode. The heroes, the villains; nobody in Gargoyles ended the series as the same person they’d been when it began. Add in a carefully woven tapestry of plot points drawn from history, legend and mythology and you had a television series that was practically unparalleled in terms of narrative complexity. I’d personally go so far as to say that it’s even better than other prominent cartoons of its era, including masterpieces like Batman: The Animated Series.

All of this in mind, as my most recent re-watch came to a close, I found myself inwardly uttering words that I’d said before and will undoubtedly say again. “There needs to be more of this.”

It’s a sentiment that will likely feel familiar to the show’s many fans. While respected for its narrative accomplishments, Gargoyles only received modest ratings during its initial television run. As a result, it’s a property that Disney hasn’t exactly dedicated much effort to keeping alive. Even just getting the first two full seasons released on DVD was a process that took nearly a decade. The idea, in turn, that the company would invest time and money into continuing it falls very much on the ugly end of unlikely.


Which isn’t to say that it never tried, of course. In 2006, the House of Mouse teamed up with the small publisher Slave Labor Graphics to produce a comic book continuation of the television series. With show creator Greg Weisman handling the writing, it ignored the third season and picked up where the second one had left off. Sadly, while many consider the SLG comic series to be the true successor to Gargoyles season two, it suffered from an erratic publication schedule that hurt sales and eventually led it closing after a relatively short run. Talking about their work on Gargoyles, SLG “Supreme Commander” Dan Vado said that the company just didn’t have the tools it needed to do the job properly. “SLG was not really ready to do a Disney license,” he told The Escapist. “We were just too small and understaffed and under-financed to take on such a big license.”

The thing is, there are other comic publishers that wouldn’t have that kind of problem. Marvel Comics, for instance, in addition to being owned by Disney, has a pool of writers, artists and money that could make a regular Gargoyles series far more viable than it was in the hands of a smaller company. And, honestly, the more I find myself thinking about it, the more I’m convinced that a new Gargoyles comic book is exactly what we need. 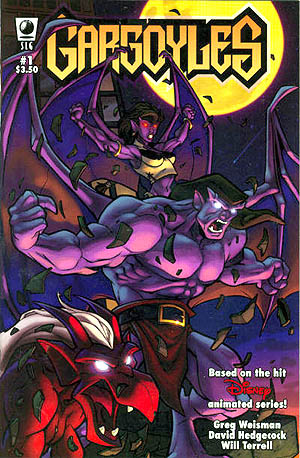 Some of this, of course, stems from my simply loving the show and desperately wanting to experience more of its world. Beyond that though, I think there’s actually some basis to suggest that a new Gargoyles comic could be valuable for both Marvel and Disney on multiple fronts. While SLG’s Gargoyles wasn’t a huge sales success at the time of its original release, Vado confirmed that interest in the comic has been on the rise in the years since it ended. “More people have called us asking about future issues in the last year than in the entire time we were publishing the comic,” he said.

In other words, while it’s doubtful that a Gargoyles comic would sell on the same level as something like Marvel’s recent Star Wars re-launch, there’s already a built-in audience hungry for something fresh from the franchise. A new, well-written comic (perhaps again employing the talents of Weisman) made within the confines of reasonable expectations could still make some money. Moreover, if a Gargoyles comic did well there would be plenty of room for spin-offs that that same fan-base would likely eat up. The universe established by the show spanned centuries and developed a wide cast of characters who were just as interesting as the titular heroes. It would be easy to launch a side series chronicling Demona’s survival over the ages or the adventures of Goliath’s gargoyle clan prior to their destruction in 10th century Scotland.

A comic book could also more deeply explore some of the more mature themes that the cartoon had to skirt around. Notably, this is something that Marvel itself has actually done before. Back in 1995, it released its own harder-edged Gargoyles spin-off comic which told extra stories alongside the show. Like the SLG book it only lasted a few issues, but it’s arguably still demonstrative of what I’m talking about. A cartoon, ostensibly for children, can push boundaries but, ultimately, can still only delve so deeply into the darkness of the world. Comic books have a much wider range of freedom to work with.

I’d also argue that reviving the Gargoyles franchise in comics could be valuable for Marvel and Disney in their continued efforts to dominate the Hollywood box office. While the Marvel Cinematic Universe is still making money hand over first, there’s no getting around the fact that audiences will most likely start to lose interest in superhero movies someday. Cultivating Gargoyles as a Marvel property could give the companies the opportunity to, some time down the road, turn it into a new film franchise under the cash-printing brand umbrella of Marvel Studios. Disney has been casually considering this for some time now, why not use a new comic as a foundation to actually pull the trigger?


What it ultimately boils down to for me is the fact that Gargoyles as it exists now does almost nothing for anyone. At best, it sells a few DVDs here-and-there to overly nostalgic fans in their late-20s. Reviving it might be a risk, but if done with caution and care it could breathe new life into a franchise that deserves a far larger place in popular culture than it has. Granted, these could all just be the wishes and ravings of a fan upset that one of his favorite things has been allowed to fade to near obscurity. Even if that’s the case however, can you really blame me? Gargoyles, in its prime, was a force of pure brilliance. It often had more guts and vision in a single episode than other shows exhibited in the entirety of their existence. To let something like that fade away is nothing short of shameful.

Thanks to Cap That for the in-episode images.