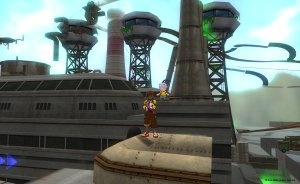 “I’ve worked at Cartoon Network for eight years,” said Chris Waldron, FusionFall‘s executive producer, “and this game has been my dream for quite a while now.”

Targeted to the 8-14 demographic, FusionFall draws from Cartoon Network’s TV lineup and then homogenizes all the characters into a more mature, cel-shaded manga art style. For instance, Dexter from Dexter’s Lab is about six feet tall in the game, and his shock of red hair has been replaced by a hipper ‘do. He also runs a mega-corporation. And instead of high-powered assault rifles and razor-sharp melee weaponry, players can fire bubblegum machine guns and swing parking meters at bad guys.

The design team is full of industry vets. Heading up the crew is Sam Lewis, who designed games for FASA and EA.com, back when it existed. Also on the team are a number of Ultima Online ex-pats. And while the designers are American, the majority of the development team is based in South Korea. But it’s not strictly an outsourcing relationship. The Americans on the dev team spent considerable time – some spent over a year – in South Korea overseeing the game’s development.

When I hopped into the game, I began in a park, dressed in what looked like a futuristic tracksuit with armor. Floating around my head was Eddy, from Ed, Edd n Eddy. In front of me were monsters with a very robotic feel to them, roaming around and terrorizing the scenery. The game blends elements from platform games into the traditional MMOG framework, and there are entire “dungeons” (the ones I saw were giant, vertical spaces with zip lines and super trampolines acting as puzzles) in which you don’t have to fight anything but the environment. It was all very reminiscent of City of Heroes, not because of the setting but because the art team bothered to use bright colors that made the experience inviting rather than an unspoken challenge.

However, I learned quickly how deceptively deep the game was when I walked up to a monster right around my level and got my ass kicked. It turns out my floating Eddy was a “Nano,” one of a litany of helpers that give you either passive bonuses or activated abilities. Additionally, every Nano falls into a fire, ice or water class that offsets paper-rock-scissors-style against monsters, which are classified the same way. Once I got the hang of it, I was cutting down baddies left and right.

Even though the system was complicated enough to throw me, a guy more than a decade beyond the core demographic, there’s something very refreshing about a kids’ game that doesn’t treat kids like idiots. The shows and games I remember watching when I was younger were the ones that either had adult themes or weren’t afraid of challenging me to think. Challenging kids to discover a game’s intricacies shows them respect, and kids respond to that.

FusionFall is set to release in 2008 on the PC.