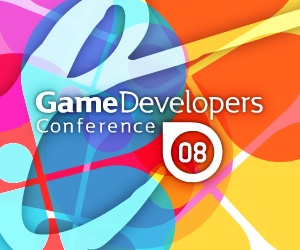 In a more interesting world, Ray Kurzweil, GDC’s guest keynote speaker for Thursday, would be the God Emperor of everything, ruling the universe from the comfort of his throne on the spice planet, predicting the future, then pulling the strings to bring about vast evolutionary changes. Sadly, we don’t live in that world.

In this world he’s an inventor, futurist and researcher working with companies like IBM and Intel to predict the emergence of new technologies – often to within months of when they are invented. He then times his own inventions to take advantage of these discoveries, accelerating the advance of technology even further. If you think this sounds like magic, you’re not alone.

“The gaming industry really fits in well with what I like to talk about,” Kurzweil said, “which is technology.”

“The word ‘game’ is unfortunate,” he said, noting that it implies what’s happening in a game, or online world, isn’t ‘real.’ He has the same problem with the term virtual reality, although he’s realistic about the fact these terms aren’t going to change any time soon.

Kurzweil sees virtual realities and online worlds as just another communication system. He calls the telephone “the first virtual reality.” At the time the telephone was invented, he said, the idea you could have a conversation with someone across a continent was mind-bending. Now we take it for granted. But interacting over the internet, in an online world, is no different from talking on the phone. And it’s real real, not virtually real.

“We’re going to be spending a lot more of our time in virtual reality environments,” he said, suggesting virtual reality will soon be competing with real reality, pointing to a near future date when we’ll have blood cell-sized computers we can inject into our bodies that will tap directly into our nervous systems to deliver a virtual experience almost indistinguishable from the real world. And no, he wasn’t kidding. One of the companies he works with is almost ready to start building such a computer.

“I’ve been studying technology trends for 30 years,” he said. “I quickly caught that the key to being successful as an inventor was timing.”

Kurzweil has a team of people who work with him who do nothing but collect and help him analyze data of all kinds, like, for example, the current state of digital camera or voice synthesis technology. He then uses that data to chart the growth (and sometimes the invention) of various technological advancements.

He says the future is unpredictable, at least as far as specific projects and people, but that technological innovation proceeds along a very stable, very predictable and very real exponential curve. And he should know, considering he predicted the development of the world wide web, down to the year.

Tapping into what seems to be an emerging theme at this year’s GDC, Kurzweil talked briefly about the democratization of technology, and how, as technology becomes better, more reliable, more ubiquitous and – most importantly – cheaper, we, the people, begin using it not only to make our lives easier, but also better, freer and more independent.

Twenty years ago, only the very wealthy had cell phones, and those didn’t even work all that well. As the technology improved, it also became more widely adopted. A few years ago, it became ubiquitous. Now we have phones that take pictures, record video and perform all kinds of functions, for only a few hundred dollars or less, that weren’t even possible with devices costing a great deal more a couple years ago. In a few more years, we’ll have produced enough mobile phones for everyone on the planet to have one in their pocket, each more powerful by an order of magnitude than the computers that used to cost millions of dollars and take up several rooms.

Factor in digital cameras and laptop computers, and practically anyone can now create and publish media. Meaning it’s not just the technology that’s being democratized, but the nature of creativity itself. 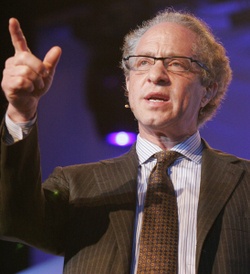 He used the bursting of the technology bubble in the year 2000 as an example. Kurzweil said this was a Wall Street problem, not a Main Street problem. The explosion of popularity of the world wide web in the late 1990s led Wall Street analysts to (correctly) assume the web would revolutionize commerce in all areas, but it didn’t happen as quickly as they wanted it to. They were thinking linearly. But exponential growth takes a long time to ramp up; then, when it does, it moves a lightning speed.

By 2000, Wall Street had lost patience with the web and the tech stocks crashed. A few years after, as the exponential curve predicted, the technology had advanced to the point where many of The Street’s predictions came true, only a few years later than they had anticipated. Not, however, later than Kurzweil anticipated.

Kurzweil showed us a graph charting the development of practically every level of technology man has ever created, from fire to the world wide web. Even factoring in discrepancies between when various experts believe such things as the wheel were invented, the development of every single technological advance follows his exponential curve. It’s not magic, just a vastly broad perspective.

“Six or seven years ago, most people didn’t use search engines,” he said, pointing to the latest in a series of technological advances. “The world is changing very dramatically, very quickly. The world will be very different in three to four years.”

He then attempted to demonstrate the method of his particular brand of insanely intelligent madness. He told a story of talking to a business partner about devices that could be used by blind people to help them read signs and papers and menus in restaurants. The person wanted to know how soon digital camera technology could be used to make a device that would read the written word and convert it into the spoken word. Kurzweil had actually built such a device in the 1970s. It was roughly the size of a dishwasher – not very portable.

Kurzweil listed off the problems such a device would encounter, from trouble with lighting, to image stabilization, to pattern recognition, and surmised that it would be 2006 before the hardware was intelligent enough to deal with these problems. The year was 2002. But that wasn’t the only obstacle; the software to interpret the images captured by such a device, and then accurately transmit the written text to spoken words hadn’t yet been developed, and that would take about 4 years. The time had come, in other words, to force the convergence. That’s what Kurzweil does. So they started working on making the device a reality. By 2006, he says, they had a prototype.

Then he stepped to the podium and produced an oblong Nokia cell phone. With it, he took a picture of the papers at his podium, and waited a few seconds while the phone chewed on the image, then spat it back to him, in a computerized voice, as clear, plain and exact spoken English. He’d just used a cell phone to read a piece of paper. In 2002 he predicted it’d take 4 years to make such a device – and it had. Two years later, it’s being mass produced. Kurzweil is always in the right place at the right time. Again, it’s not magic, and it’s not luck. He just has a better map and a better watch.

“Telephones … took 50 years to be adopted by a mass audience (about a quarter of the population),” he said. “TV and radio took decades. Cell phones took seven years. The web took only a few.”

Kurzweil surmises that this is indicative of a pattern. He calls it an evolution. Each technological innovation creates momentum, making the next one more easily adopted, and so on and so on and so on. The adoption time for each successive innovation decreases exponentially because each revolution, standing on the shoulders of giants, has less ground to cover.

The first computers, for example, were designed on paper and took years to build by guys with screwdrivers. Now, computers are designed with the help of other computers, and – in some cases – built by them as well. Where this will lead us is anyone’s guess, but Kurzweil has plenty of ideas. In the next 20 years, he says, the machines will be so small they’ll be able to make even smaller machines. Which brings us back to the computer the size of a blood cell.

According to Kurzweil, a version of this machine will be able to deliver oxygen to your body faster and more efficiently than your own blood. He says this will enable you to run an Olympic miles without breaking a sweat, or sit at the bottom of your swimming pool without drowning. I think of what all else such a machine would make possible and my mind stops processing. It’s too sci-fi. I must think linearly.

Kurzweil is currently (among other things) working with one of the Google founders to create cheap, sustainable solar energy technology. He says that within 20 years we’ll be free of our dependence on fossil fuels, tapping into the abundant energy of the Sun. Kurzweil says a lot of things will happen in the next 20 years. And I believe every one of them. It’s not magic, it’s genius.

Russ Pitts is the Acquisition and Production Manager for The Escapist. His blog can be found at www.falsegravity.com.