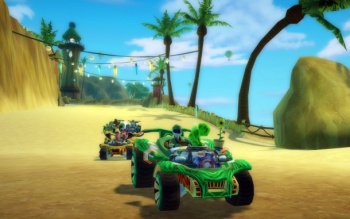 Free-to-play, microtransactions, social game networks – the online gaming space is changing, and at this year’s Game Developers’ Conference in Austin, developers and publishers will wrangle with the idea: How the hell do we make money off of it?

When you step back and look at the big picture, this year’s GDC Austin is about developers and publishers learning how to make money.

Okay, yes, it’s true that “developers would like to make a profit” as an idea is about as obvious as “water is wet,” but it’s not quite as clear cut as that. In a conference call, GDC Austin board members Eugene Evans (Senior Director of Marketing at Mythic Entertainment) and Matt Firor (President of Zenimax Online Studios) discussed emerging trends in development and the industry as a whole, and one of said trends was the idea of alternative pricing – especially for online games.

The free-to-play genre has seen an incredible emergence recently, with major players like SOE and Turbine entering a market that was previously the realm of Asian online games with FreeRealms and Dungeons & Dragons Online: Unlimited. When I asked how free-to-play games that relied on optional microtransactions to fund development could entice gamers to not just play for free but to pony up some cash, Evans laughed, “If I knew the answer to that, I’d be busy doing it – you’ve hit on the million-dollar question.”

That was one of the major issues to be tackled at this year’s GDC Austin, with industry veterans and would-be revolutionaries hoping to shed some light on the issue. The online gaming space was going through its own little version of the Dot-Com Bust in the early turn of the century, where relying on one model to drive revenue for an entire industry (then: ad sales; now: subscriptions) was quickly proving infeasible. In fact, remarked Evans, you were seeing game companies bring on people with backgrounds not in game development, but in web development, trying to understand how those sites worked – while simultaneously they saw social gaming sites bringing on developers of traditionally “hardcore” games. Both sides, he said, were trying to understand how the other worked and how they made money.

Of course, this doesn’t mean that subscription-based games are going the way of the dodo, either. “There’s room in the market for both Cadillacs and Toyotas,” explained Firor. “If people perceive a game as high-quality, they will want to buy a subscription.” Evans concurred, “It’s easy to try and treat it as a zero-sum game, but I don’t think it is.” In fact, he elaborated, it was easy to see social gaming sites like Pogo as gateways into the traditional online multiplayer space: The types of people who usually play Solitaire start playing single-player games online within the web, discover the chat portion and social element, and eventually warm to the idea of playing with the people that they’re chatting with.

The “casual” browser game market is becoming a powerful force to be reckoned with, believes Firor, because there is an accessibility there that larger games that require downloads or installs – not to mention hefty system requirements – simply don’t have. “You go to the website, you see a game that looks cool, you click it, and you play it. It’s very good for smaller developers and indie developers, but there’s still room for huge games with huge dev teams behind them like The Old Republic – you’ll just need a better computer to run it.”

In this economic climate, that easy click-to-play immediacy helps with more than just accessibility. When dealing with small microtransactions that you can just purchase on the fly and “make the decision on the spot,” it makes it easier to justify spending money than going to a store and dropping $60 on the hottest new console title. “If you catch someone ‘in the moment’ where they’re playing a trial version or a free portion and are excited about the game, that one-click purchase is more likely to earn their money,” added Evans.

These were the issues – among many others – that the two GDC Austin board members were interested in hearing discussed at the conference. Were there any panels in particular that they were looking forward to? Evans was interested in hearing what longtime SOE boss John Smedley had to say about the company’s success with FreeRealms as well as Brian Reynolds’ experiences as a “traditional” game designer now at social games site Zynga, while Firor was looking forward to “anything with World of Warcraft.” Blizzard chieftains J. Allen Brack and Frank Pearce are scheduled to deliver a joint keynote on the second day of the conference.