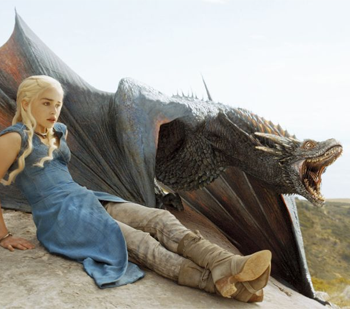 The author of A Song of Ice and Fire plans to spend less time on the Game of Thrones set and more time writing his next book.

Between the book series, TV show, and multiple video games, the Game of Thones franchise is a pop culture phenomenon. As production ramps up for the fifth season of the HBO series, author George R.R. Martin is also plugging along on the much-anticipated sixth book in the saga, The Winds of Winter. However, it appears that progress has been slow, since Martin puts in a lot of work on the show (and doesn’t write when he’s traveling). Something’s gotta give, and Martin’s plan to manage his time is to put less work into season five of Game of Thrones.

In an interview with Vulture at San Diego Comic Con, the discussion turned to the exotic locales used for the various lands of Westeros and beyond, with Spain being used for scenes set in Dorne. Martin said that because he’s “got to finish the book The Winds of Winter,” he won’t be making a set visit. “I’m making the trips I’m already obligated to make, but I’m not adding any new trips at this time.”

Additionally, Martin won’t be penning an episode in the next wave as he has in seasons past, “once again because I have this book to finish.” It appears that, though he dislikes fans questioning his ability to finish the series, Martin’s ready to buckle down and get his next book done.

It’s only been three years since A Dance With Dragons was released, but considering that Game of Thrones was published way back in 1996–and there was a six-year gap between A Feast for Crows and its successor–it’s understandable that fans might be getting antsy to see this saga continue. The Winds of Winter isn’t even the last book in the series–there will be at least one more–so even if Martin gets it out in the next year or two (optimistically), the wait won’t even be close to over.

Source: Vulture via The Mary Sue