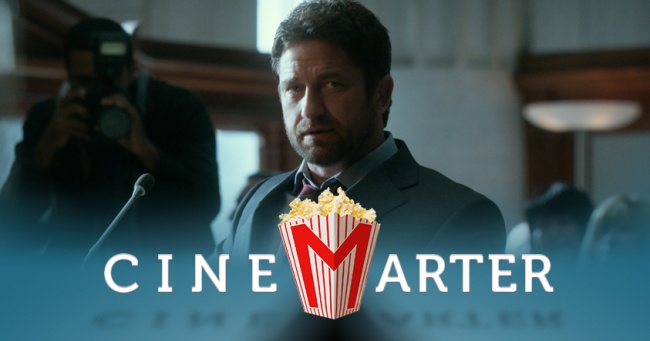 I can’t imagine anyone going into Geostorm expecting anything more than a cheap-looking Roland Emmerich knockoff being released in the downside of October in hopes of making a quick buck against cheap competition. It’s telling how Warner Bros. decided to barely screen the film, embargo those who saw it early (even if they didn’t attend it as press, which was tons of fun), and then not even have any Thursday night showings. It’s bad, WB knows it’s bad, and I hope audiences are smart enough to stay far, far away from it.

The film takes place in the near future, which has seen many of Earth’s nations get together and build a satellite system that is able to control the planet’s weather. Seems great. Three years after it goes online, it starts to have “malfunctions,” which kill or threaten to kill thousands of people. So, the architect, Jake (Gerard Butler), has to go up to space to figure out what’s going on. What he uncovers is less malfunction and more intention, as it turns out that someone was intentionally messing with his system in order to create storms on Earth. If he can’t find out who and stop him/her in time, much of the planet will be destroyed … by a Geostorm – which occurs when there are so many storms on the planet that they’ll start spawning new ones on their own. Okay. 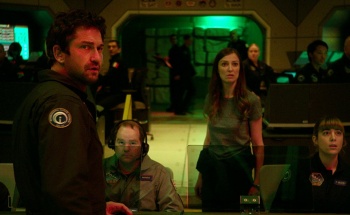 What it amounts to is very little. There are a few scenes with cities getting destroyed, but the special effects are so unconvincing that you’ll be laughing more than anything else. The politics on display are juvenile, to the point that you wouldn’t be surprised to learn that the plot was written after watching a 6-year-old playing with LEGOs. It wasn’t, as far as I know, but after watching Geostorm I would have believed it.

Here’s how inept Geostorm gets. You know how, in disaster movies, we often follow one non-protagonist character during the disaster in hopes of seeing this person make it out alive? And, at the end, we are either relieved or devastated based on the result? Well, Geostorm does this a couple of times – once, eye-rollingly, with a dog. One of those times, we don’t get the cathartic follow-up. We watch a woman run away from a tidal wave, dodging debris and even an airplane that falls out of the sky. We never find out if she survived or died. The film never shows us that.

Geostorm is an abysmal excuse for a disaster movie.

Someone has to explain to me why we keep casting Gerard Butler as an American. The cast has a few non-Americans who are playing Americans – Jim Sturgess and Abbie Cornish have big roles – but at least they can pass. Butler simply cannot. His American accent is horrible and distracting. And he’s a poor dramatic actor beyond that. What is the incentive? Is it just box office appeal? For some reason, we’ve decided to go see Butler’s movies, regardless of quality. Hopefully you avoid this one.

I mentioned the special effects earlier, but it’s important to touch upon just how bad they are – especially when so much of the film is computer generated. That “plane falling out of the sky scene” from earlier is in the trailer, and if it didn’t look like it was out of a PS1 game it might be a pretty cool shot. But, alas, that is not the world in which we live. Most of the CGI is bad and noticeable; it’s been a while since we’ve seen the world destroyed with such poor special effects. 2004’s The Day After Tomorrow looked better! 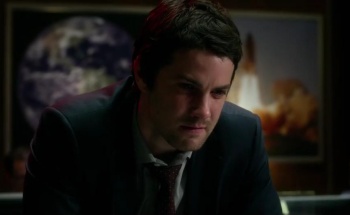 But, then, that was an authentic Roland Emmerich movie. Say what you want about Emmerich – and I do – but at least his disaster movies make it look like the disaster is real. Geostorm comes to us courtesy of Dean Devlin, a man who worked on a few Emmerich projects and for reasons that universe will never answer decided that he learned enough to make a poor knockoff version. He should be working for The Asylum. At least The Asylum’s movies look cheap because of a limited budget – and some of them show more craft than is on display here.

Geostorm is an abysmal excuse for a disaster movie. It has a terrible plot, bad acting, horrendous special effects, a fair amount of stupidity, and a lack of basic craft. It’s a poor knockoff of a Roland Emmerich movie – and Emmerich’s movies are already in a low cinematic tier. This is garbage, pure and simple, and you should not support cinema this lacking in quality.

Bottom Line: Geostorm is trash. Its only positives come from the unintentional laughter you’ll have in between depressing “this is what cinema has become” thoughts.

Recommendation: Laugh at Geostorm once it’s out on home video with some friends. That’s the only way to enjoy it.