Not having on-screen objective markers really did jump out at me while playing Doom 3, probably because I can’t even remember the last modern-times game that didn’t have them. Silent Hill Downpour, maybe, because I remember repeatedly getting lost, not finding the town map for ages and having to draw my own on paper, and that doing so filled me inexplicably with joy.

It’s possible that objective markers, and perhaps all indicative GUI elements, are getting a bit out of hand. I’m very firmly in the camp that believes videogaming is the most exciting form of entertainment media, destined to become as much a part of everyday life as film and television if not more so, and will be doing that as soon as it gets out from under its rather unfortunate image problem. And the argument I’ve made quite often is that the obvious superiority of videogames lie in the participation by the user. It calls for an alert mind, constantly thinking and ready to meet the challenges, while the TV or film-watching mind is lying across the metaphorical sofa going moist and squishy under the bright flashing lights.

But that argument’s feeling more and more hollow the more games I see that are actively trying to remove the slightest attempt on the player’s part to think for themselves. It’s really getting to a head in spunkgargleweewee games like Medal of Honor: Warfighter. It’s already a pretty fucking linear game, but when you’re heading down the corridor to the next door it floats a big white arrow over it anyway. Obviously I was going to check that door, game. Are you worried I might get confused and start tunnelling into the walls?

Surely I don’t need to give any further explanation as to why an objective marker in a game with linear maps is about as sane as employing a remote-controlled device to press buttons on another, larger remote control, but I’m starting to find objections to their presence in open-world games, too. Partly because I prefer when exploration is embraced as a mechanic and partly because I think everyone who put so much work into the environment art is being done a disservice when I’m mainly just staring at the GUI. There are far too many games – seems to happen a lot in sandbox driving games, on reflection – where I spend far too much of the experience with my eyes glued to the minimap.

The player of a game perceives things on two levels. First they see the HUD, and then they see everything else. When I have an objective marker my first instinct is to run straight for it as the crow flies, because I’m a good little drone and I’d hate to think the next bit of the game is getting impatient waiting for me to show up. And yeah, not everyone approaches games that way, and not everyone’s trying to get through the game quickly so they can write the review on Monday, but I think I’ve come up with a nice pithy game design tip out of this: when you highlight an objective, you’re also de-highlighting the entire rest of the game.

And you need to think carefully about doing that. I’ve mentioned before that a lot of the appeal in open-world games for me is getting distracted by things on the way to other things. Maybe I’m gambolling through the forest when I see a fully-accessorized Welsh dresser set up in the middle of a meadow. “Hm,” think I. “What strange happenstance deposited this piece of furniture? Perhaps I shall have a look. Maybe someone left money and weaponry in all the little unnecessary drawers.” And then maybe while I’m going through those piddly little drawers I’ll spot a white rabbit in the nearby undergrowth and chase it all the way to its stash. 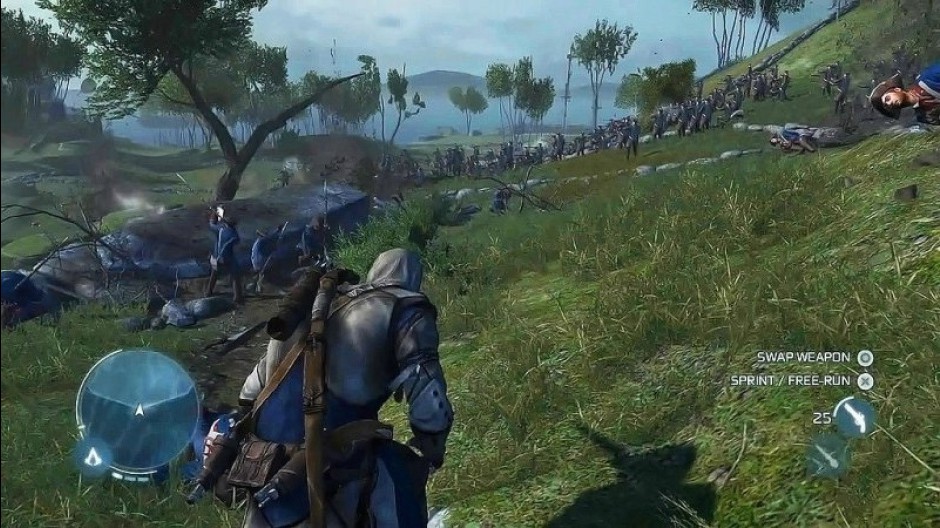 But it seems like in a lot of open world games these days I’d instantly know whether or not that Welsh dresser was worth taking time out for because there’d be a dirty great big icon hovering over it, and a certain amount of the magic of discovery to be had is lost. I mean, look at Assassin’s Creed 3, without wishing to spoil anything I might say in a review of it, there’s not a single slightly significant thing in that game that doesn’t sport a massive indicator on the minimap, so everything in between the icons is so much faff that you needn’t even glance at.

Just a thought, but surely putting a big arrow over something to make sure the player looks at it should be saved for the last resort, after you’ve done everything else you can to make it noticeable with a striking appearance or contrasting colors or laying out the surroundings appropriately. I think of Team Fortress 2. There needed to be a way for teammates to identify friendly spies disguised as the enemy. At first the developers tried sticking big floaty indicators over their heads, but it didn’t naturally convey the intended meaning. So instead, to their own team, spies appear to be wearing incredibly obvious cardboard masks, which is both more indicative and funnier. The elegant approach is infinitely superior.

And there’s something faintly annoying about HUD markers, too. It’s a bit pestery, really. It’s like a little buzzing fly crawling on your spectacles. I can sort of see what was rubbing up against Peter Molyneux with the latter Fable games when he was messing around with a little sparkly trail instead of a minimap, but surely that’s also leading the player by the nose, and doing it with a river of Lucky Charms is somehow even less natural.

It seems like having to be on the hunt and searching and understanding the environment for yourself used to be something that was just in videogames without the developers having to consciously put it in, like hunting for keys in early first person shooters. In the same way, human beings are born with legs without the mother having to consciously will them on throughout the course of the pregnancy. But now the mothers are taking no-leg pills and the midwife is waiting at the end of the bed with a hacksaw because they’re afraid the child might spend too much time walking around and not getting the intended life experience. If you see what I mean.

You’re working on a triple-A game, your artists have (hopefully) put a lot of work into making a very lovely world rich in detail and discovery. If you want your player to appreciate all that, what you do not do is put a massive fucking vibrating beacon on the far side of it. No, you hand them a map, and a compass, and you tell them to follow this road east as far as the big tree then take a left and keep walking ’til they see the windmill. Because if they’re anything like me in my boy scout orienteering days, they will then spend the next six hours fully appreciating the entire surrounding eight square miles.