Don’t be fooled by 3D. Just … don’t. 3D is nothing more than an expensive experiment being carried out by the entertainment industry. Not a technological experiment, mind, a psychological one. The entire entertainment industry is trying to determine if it’s possible to pass off an inferior gimmick as the next step towards the technological singularity simply by having every media outlet on the planet tell everyone that it is. And that’s why you mustn’t be fooled by it, because if this works out, then this will just be the beginning. They’ll start selling us puppet theatres and say we’re one step away from the holodeck. They’ll flog LPs made of pressed ham for the all-in-one entertainment and dining experience. Then they’ll probably think, “Ah, why not cut out the middleman?” and then just kill us and take all our money.

3D is not the future. It’s not “immersive.” At best it makes everything look like a six-inch paper cut-out, and in order to create that effect it has to reduce the quality of the image. After years and years of the entertainment industry working towards making bigger and crisper images, suddenly they’re trying to make us forget about all that because, holy shit, a thing looks like it’s in front of another thing because of an exploitable quirk in binocular vision. Well, they can’t do it. You either need glasses or you need to keep your head still at all times, and no new technology has ever lasted that’s less convenient to use than what it’s supposed to replace.

Poor, misguided Nintendo. Like a teenage runaway, they became desperate and fell in with a bad crowd. But who can blame them? No-one knows where the console industry is going at this point; taking gambles is really all anyone can do. The game has changed to the point that no-one even knows if they’re carrying the right ball.

Up until the current generation, consoles were easy; you just had to have better graphics than the last generation. But it’s only with the PS3 and 360 that we discover there was another factor all along: accessibility. A console had to survive on both the strength of its hardware and the ease with which third party developers could create games for it. The balance was best around the PS2, but now processing power is about at the highest level it can be for practical purposes. Sure, we could still staple more and more memory on but there are going to be fewer and fewer companies in a position to make the most of it.

That means that the future of consoles has to lie in one of the lesser aspects, such as the controller or the visual. And fair play to the industry, attempts have been made to innovate in both those areas. Motion controls on the one side, 3D on the other. Nintendo was the smarter company by incorporating the mechanics right into the starting hardware with the Wii and the 3DS respectively, because this effectively forced players to use it. Developers used it with a sense of, “Might as well, since it’s there.” Sony and Microsoft both made their versions optional add-ons, and that’s why they will both fail. People get set in their ways, you need to drag them kicking and screaming into the new. That’s what Nintendo and the rest of the entertainment industry are doing with 3D.

The problem is, if you take this strong-arm strategy, you have to be certain that your new technology actually is the way of the future, because otherwise you just make a giant mess of everything, as you can see in the state of things now. I’m all over manipulating the shithead masses for their own good – that sounds like a plan – but you need to think about it more. Neither motion controls nor 3D represent the way forward because they both involve making games and movies less immersive. I’ve gone off on that at length before. So, Nintendo, career innovators that you are, lead the way. Where to next, coachman? 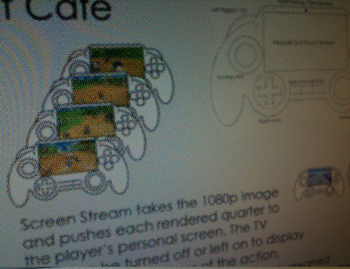 So far it can be pretty safely assumed it’s got HD graphics that can compete with the PS3 and 360, which means hurray, another platform that will be out of the reach of decent third party support. But with the Wii and 3DS innovation one-two punch that dismally failed to connect, what kind of hardware will Nintendo lead their next blow with? Details of the controller are still speculative, but from what I can gather, it’s moving back towards the Gamecube style – which I thoroughly support because that whole nunchuck arrangement was like playing a guitar that had half its strings on the wrong side of the neck and the other half on a different guitar altogether – and will incorporate both Sixaxis-style motion control and a DS-style touch screen.

Now, tell me this whole image doesn’t smack a little of “kitchen sink” design, of throwing everything together into one package to see what happens. Tell me it doesn’t also bring to mind an image of Nintendo on its knees, clawing at its head and screaming “What the hell do you people want?” Now, I do like the DS touch screen, I think it adds a new dimension to games and tapping it with the stylus has the kind of tactile feedback that mashing your oafish fingertips against a similar screen lacks, but part of the reason why it works is because it’s right next to the screen where the action’s going on.

I’m trying to think of ways to employ a touch screen and a TV, and the problem I keep bumping against is that the player can only look at one screen at a time. And if you used the touch screen for extra contextual buttons then you’ll run into the iPhone game problem that there’ll be no physical feedback. One thing I suppose you could use it for is as the in-game PDA where you keep your map and inventory screen, but I never had a problem with how these usually worked before, by pausing the game and going to a menu. Generally if I want to check the map or manage my inventory I’m going to want the game to be paused because a zombie might come up while I’m staring at my lap and try to grab my nipples through my spine.

I’m not sure it’s going to be what’s going to get console gaming out of this weird little experimental transitional phase, but we’d better come up with something soon or the poor innocent children (handhelds) will continue to be bewitched by strange men offering sweets (3D) as the next leap forward is sought. What we need is another “dual analog sticks,” another controller innovation that makes us wonder how we ever did without it. I never seem to use my pinky fingers on a standard controller, maybe we could think of something for them to do. Like a “suggestive and vaguely insulting gesture” button.