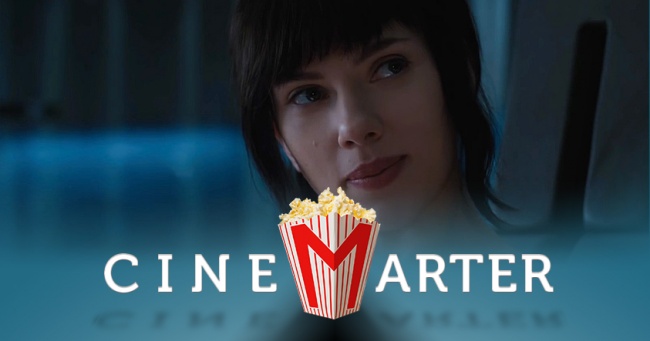 Here’s a shocker: a live-action version of a manga directed by a visual effects artist looks pretty but is emotionally and intellectually vapid. Gee, who could have seen that one coming? Technically speaking, the new Ghost in the Shell isn’t a remake of the 1995 movie of which everyone seems really fond – although it does shot-for-shot copy multiple scenes. It’s been brought to us by Rupert Sanders, a name you might know because of the scandal he had on the set of his previous (and only other) movie, Snow White and the Huntsman.

The plot sees Major Mira Killian (Scarlett Johansson), a largely emotionless cyborg who works for Section 9 of the police force, try to track down someone who’s killing a bunch of executives working for a top AI company, Hanka Robotics. She’s joined by Batou (Pilou Asbaek) and a bunch of characters you’ll remember from the original movie but who have almost no screen time in this one. They’re commanded by Chief Daisuke Aramaki (Takeshi Kitano), who only speaks to them in Japanese, they reply in English, and yet everyone understands each other perfectly. It’s presumably because “cyborgs can do that,” but it’s not explained. 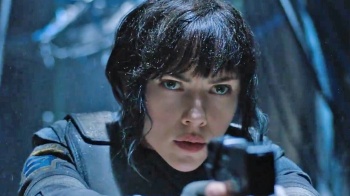 There’s a mid-point twist that turns the movie from a “hunt down the criminal” movie to a “take down a corporation” movie, although it’s a twist that (1) you should see coming and (2) ultimately makes the film feel more generic than it should. That’s without having seen the original. They’re not the same movie – their arcs are on slightly different trajectories – but they are similar. The main differences stem from that trajectory and what the films are trying to accomplish.

The ’95 film moves quite quickly through its story and never tries to let its reach exceed its grasp. The new one wants to be much bigger than it is, so when we get to its big climactic scene, it doesn’t feel like that should be it. Emotionally and thematically there should be more. Our protagonist doesn’t ever get to square off with the eventual villain. Sure, it probably wouldn’t be much of a fight, but we’re still robbed of seeing that – almost like it’s missing a proper third act, settling instead for an abbreviated, unfulfilling one. It works differently in the original and it’s better for it.

The new Ghost in the Shell is an emotionally and intellectually vapid property whose only positives are things that are taken from the 1995 movie and have been done better in live-action before now.

Our new film is also very light on the philosophical discussions – particularly pertaining to the transhumanism aspect of its story. Instead, we focus on Major’s story, which sees her have amnesia (sigh) and questioning her identity – but without the character depth or strong performance to make us care. The other problem that comes from this? Well, it’d be a spoiler to tell you exactly what’s revealed, but let’s just say that those whitewashing claims are even more valid after actually seeing the movie. It’s an attempt to comment on identity but (1) doesn’t do much of that and (2) brings the issue to the forefront of our minds. They really botched that aspect. That isn’t what makes it bad, but it’s a missed opportunity and a symptom of a bigger problem.

But, okay, so it’s not intellectually stimulating. What about the action? Well, it’s choppy, hard-to-tell-what’s-going-on action. One scene takes place in the dark with a strobe light effect that’s literally incomprehensible, but the rest aren’t a ton better. There are three big ones – the opening, one in a big pond, and the climax – and none of them are particularly memorable or even very entertaining.

The only genuinely good part about the new Ghost in the Shell movie is how stunning it looks visually. Sure, it looks like every future movie ever, but that doesn’t mean that we can’t sit back and appreciate how much work the visual effects people did and how truly great the finished product turned out to be. It really does look and feel as if Ghost in the Shell is taking place in the future, and that immersion is something that some movies fail to accomplish. It’s not really surprising that the effects are great – the ’95 film has been reaped from to the point of redundancy and director Rupert Sanders gets visuals, if nothing else – but it’s still nice to see.

The new Ghost in the Shell is an emotionally and intellectually vapid property whose only positives are things that are taken from the 1995 movie and have been done better in live-action before now. The story trajectory makes us feel like we’re missing a fitting conclusion, the characters are either bland or almost nonexistent (see: all the supporting characters of Section 9), and the entire thing feels like a waste of time. It has good special effects but can’t even make its action entertaining. It’s a shell of its former self.

Bottom Line: Visually stunning but with nothing else going for it, Ghost in the Shell is a bad movie.

Recommendation: Just watch the original. Or The Matrix. Or Ex Machina. Or Under the Skin.