Pokémon, in any of its umpteen iterations, is the quintessential collector’s game. Any recent version offers not only an ever-growing roster of creatures to hunt and collect, but a chance to retain them beyond a single playthrough. Once you’re done, you can upload them from one generation to the next and continue to expand your collection, urged ever on by the enthusiasm of the game’s completionist slogan: “Gotta catch ’em all!” Well, “all” is relative. At this point, the original total of 151 different types has swelled up to just under 650. So it’s unusual to hear of one particular version of Pokémon that doesn’t buy into this frenzy of endless catching. One where, by the end, you don’t have dozens or hundreds of monsters-in-pocket. By the end, you have zero. 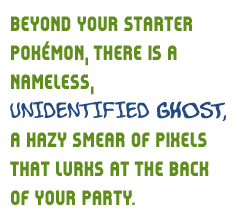 There is a story, cropping up on Tinycartridge via Player’s Pulse, likely originating from 4chan, of an encounter with a “creepy Pokémon hack,” appearing as an unmarked, black copy of the original Pokémon Red for the Game Boy. Such hacked cartridges aren’t uncommon, and usually contain an assortment of modified or fan-made pokémon, but this one is different. As the story goes, this version plays out essentially the same as its original, but with one major addition to your roster – beyond your starter pokémon, there is a nameless, unidentified Ghost, a hazy smear of pixels that lurks at the back of your party. It cannot be dismissed or set free. Stranger still, it cannot be harmed at all, paralyzing opposing pokémon in their tracks with fear. The Ghost has a single ability, “Curse,” that does far more than chip away at its opponents’ life totals. When used, the screen cuts to black, the targeted pokémon screams, and then … it’s gone. This curse can also be used on opposing trainers after the battle for similarly morbid results. Soon, tombstones litter the roads, transforming the once-populous Kanto region into a literal ghost town.

A dark tale, but it gets darker. The game’s end is followed by an epilogue that depicts your trainer as an aged man, standing in a vast mausoleum filled with your now-deceased pokémon. You slowly walk back to your hometown, passing through rows of graves marking the victims of that ghostly pokemon’s curse. After arriving home, you are greeted to an odd sight – one by one, the spirits of the pokémon you killed appear before you, followed by those trainers slain at your hand. Finally, your old pal Ghost appears – but this time, “Ghost wants to fight.” With no pokémon of your own, you can only stand paralyzed as he inches closer. You struggle, and your health bar whittles away from your own desperation. Finally, the Ghost casts his curse, you hear a scream, the game cuts to black … and then nothing. Just an empty screen. You have to reset the game to continue. But when you turn the game back on, there’s nothing there – the save file is gone.

The truth is, Pokémon Ghost Black doesn’t really exist, except as a spooky yarn told on the internet. But part of the story’s appeal is that it could exist – nearly everything described within the hacked game appears in the original. There really is a graveyard town, where old men and women mourn for their late pokémon while spooky music plays. If you visit without a specific item, the ghosts appear hazy and indistinct, like your funereal tagalong in Ghost Black. And “Curse” is even a fully-functioning move in later versions of the game, albeit with a less drastic effect. All the pieces are already there, just portrayed as slightly off or out of place. The finished product seems like something that you really could chance into, perhaps in the backroom of some inscrutable shop of horrors, beside the mogwais and monkey’s paws. 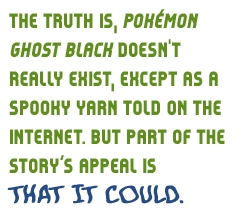 So it isn’t that Ghost Black is impossible, just implausible within Pokémon‘s own sanitized aesthetic. At the heart of nearly all the games we play there is an unspoken metaphor of life and death, but Pokémon works tirelessly to push all that unpleasantness just out of sight. There can be graves and tombstones for other pokémon, but yours will travel from one game to another, and will stay by your side forever. They don’t get hungry, and they don’t get sick – they aren’t Tamagotchi, after all. Here is a game where these animals are both best friends and ultimate cosmic weapons, which will fight tooth and claw, biting and slavering until they … faint?

This relentless cheeriness turns what could otherwise be a savage Darwinian scrum into a PG pokétopia, a place where the lion can lay down with the lamb, because they’re both electric-type. But in the grand tradition of horror, Ghost Black pushes at the corners of this perfect picture until the shadows seep in. In the same way that The Ring or Paranormal Activity updates ancient spook stories to include the prevalence of modern technology, Ghost Black draws its technohorror from a similar cache of shared experience – those fond years we’ve spent rummaging through tall grass with a pocket full of pokéballs. In any new version of the game, the critters might be different, but the mechanic is the same. We expect certain things from our pokémon and our games. The discomfort of Ghost Black comes from how it breaks those rules. If a poltergeist might cause doors to fly open unannounced or scatter paper across the room, how might a “haunted cartridge” behave? If our thousands of collective game hours constitute a type of life, where does that life go when that cartridge finally fritzes out? It’s uncanny how these gaming nightmares align so easily with elements of horror stories. The Ghost of Ghost Black belongs to a long heritage of bumps-in-the-night, hidden in the dark, but drawing inexorably close. And the shock of discovering a save file has disappeared seems somehow otherworldly, too. One minute it’s there, and then it’s gone.

In a curious twist, Ghost Black has struck a chord with a dedicated community of gamers, who have begun working towards giving it a lasting presence. Now, you can view YouTube videos that mock up sections of the game, and even play a retold homebrew version. There are even more ambitious projects that have followed in kind, such as a recent alternate reality game about a cryptic and malevolent copy of Majora’s Mask. What started as a figment, plucked from nowhere, has begun to materialize throughout the internet – and so the story of Ghost Black itself has become ghostly in its own way: Bit by bit, this game that doesn’t exist has become half-real. In the same way that urban legends gain a presence and authority through their tellings and re-tellings – always something you heard about from a friend of a friend – these revisitations inch us ever closer to the day when an honest-to-goodness copy of Ghost Black really will turn up in some second-hand shop, quietly waiting for the chance to ruin some poor kid’s childhood. Inevitably, stories change in their tellings, but in all these half-versions of the game, there is one constant: Nowhere is it suggested that there is anything actually supernatural at work, and no dark presence other than the devious crafter of the hacked cartridge. Instead, Ghost Black is about the perfectly mundane things that catch the corners of our eyes – and the way that even a familiar place can become surreal and strange when you turn out the lights. Even in a world without ghosts, there is more than one way to be haunted.

While the story of Ghost Black is undeniably twisted, it’s also eerily long-sighted. Its gaze is fixed not at a moment of youthful triumph, but many decades after the fact, framing the events of the game as a dim and distant memory. Part of this is a matter of scope and perspective – whether a story is a breezy adventure or an existential meditation depends greatly on when you choose to say “The end.” But part, too, is the way that the inevitability of death can creep into the most unexpected places – the way that, if you draw them out long enough, all stories tend to end the same way. Even Pokémon, with its remakes and generation-hopping isn’t exempt from this, and time is one element from which no pokémon is immune. Your cartridge full of shinies and legendaries, what is its fate – not tomorrow, but in ten years, twenty years, a hundred? Will it wind up in a second hand bin, to be erased at a moment’s notice by an impatient 12 year old? Or will it be found in a corroded mess at the bottom of a dusty box by your grandchildren, for whom tooling around with Pikachu is about as appealing as a rousing game of croquet? Or maybe, one day it’ll just sort of … stop.

In the final paragraphs of the story, the writer wonders why a game like Ghost Black would even exist. Is it some sort of sick joke, to get little kids running to their parents, screaming “Mommy, make it alive again”? Or is it something else? Pokémon, after all, is one game where the collection never needs to stop: You collect, and collect. You collect ’em all, and then they make more, and you collect them all over again. You collect hundreds, thousands. You collect them, and they collect dust. How perverse, then, to imagine the point at which all this ends – with one of your own stalwarts come back to you from beyond.

But it is not there to fight, or to train. It has come to collect.

Brendan Main hails from the frosty reaches of Canada, where all the pokémon are ice-type. He ain’t afraid of no ghost.

I Want It All

All That’s Shiny is Gold