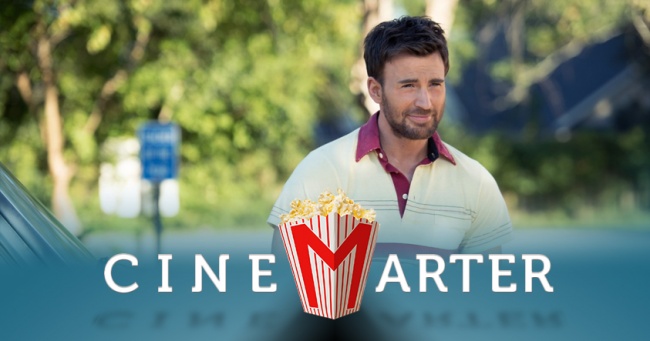 Who would have thought that a custody battle could make for a boring movie? Gifted is about exactly that. The child in question is Mary (Mckenna Grace), a 7-year-old who is exceptional at mathematics. The two people wanting her? Her uncle, Frank (Chris Evans), who has raised her since she was less than a year old after her mother died, and her grandmother, Evelyn (Lindsay Duncan), who only recently began to take an interest upon learning of her mathematical prowess.

Basically, we’re forced to ponder this question: What is the best way to raise a child prodigy? Should she be given the best education and resources in order to devote herself exclusively to her skills, or should she be allowed to be raised like any other child? The movie sides us with Frank, who fixes boats, has a cheap apartment, and declines a scholarship to an elite school to keep Mary in the normal one. Evelyn is presented as the villain – a ruthless, uncaring woman who only wants to force the child to do math 24/7. As is usual in these movies, there’s no happy medium – it’s a binary issue. 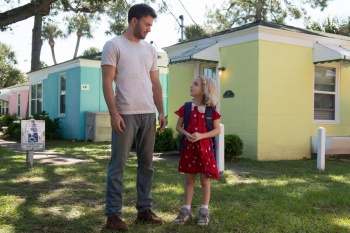 So, we get to watch both the courtroom battle between lawyers – where each side is presented as either pure good or pure evil, depending on who’s talking and about what – as well as what happens at home with Frank and Mary, during which time Frank looks contemplatively about what to do, begins a romantic relationship with Mary’s teacher, Bonnie (Jenny Slate), and … that’s pretty much it. The movie poses that big question, answers it for us – it’s on Frank’s side – and then we have another 100 minutes to sit through as we watch the drama unfold.

By presenting it as such a black and white issue, Gifted intellectually stunts itself, giving the audience very little to think about while it plays out its courtroom and familial dramas. And neither one of those does a whole lot for us emotionally. The courtroom exists to slander one side and prop up the other – delivering some exposition and context for actions but otherwise progressing very little. Meanwhile, at home, we’re supposed to like Frank because he genuinely cares for Mary and because the movie tells us to.

Gifted fails because it presents us an important question and then answers it for us really early on, makes us pick a side, and then delivers a story that can’t generate an emotional response.

Not that he isn’t a likable guy or anything. Chris Evans is charismatic and has a warm personality, and we believe that he probably would do anything for this kid. He’s just not the most interesting character beyond that. There are elements to him that would have make him more interesting if they got a greater focus – there’s some depth there – but the film doesn’t do a lot with them. Evelyn has more depth to her – her relationship with her daughter and all that that represents gives her more of a character than Frank ever gets – but the script doesn’t have enough nuance to its central question to make us ever think she might be a potential fit for Mary.

The rest of the script tries, at almost every instance, to be a tearjerker – either because of joy or sadness – to the point that it’s almost laughable. So many otherwise trivial events are tonally treated like a big deal – except that the screenplay doesn’t allow them to be. It’s like director Marc Webb was at odds with the script as to how important most things should be. He wanted everything to be treated as such; it wanted to build up to a climax. The result? It all feels about as important as forgetting to pick up the mail and having to do it the next day.

Speaking of the climax – it is the worst kind of Hollywood nonsense. It makes nary a lick of sense, it wouldn’t legally work at all, and it features one last gotcha that had me rolling my eyes. It wants to be this great emotional moment and it’s just impossible to take any of it even remotely seriously. That’s true of a bunch of the film, I suppose, but the ending is the worst.

There are positives to Gifted. The acting is strong all-around, particularly from Evans and Grace – the latter of whom is exceptional, especially given her age. Lindsay Duncan gets to play evil, Jenny Slate exists for Evans to bounce feelings off, and that goes double for Octavia Spencer, who plays Frank’s neighbor and really needed more to do.

The acting isn’t the film’s problem. Gifted fails because it presents us an important question and then answers it for us really early on, makes us pick a side, and then delivers a story that can’t generate an emotional response – even though it really wants to. Without any nuance, the film loses its reason for existing, and gives us little reason to watch it. It’s a harmless tearjerker, sure, and the acting goes a long way to making it watchable, but it’s only barely so. For me, at least, it generated apathy and frustration more than tears and joy.

Recommendation: If you’re a sap for this sort of thing – whether or not you like the trailer is a good indicator – it might be worth checking out. For the rest of us? Skip!

The Lure – The Glam Rock Mermaid Horror Movie You Need