You’ve been drawn into a fascinating adventure, and you’re getting closer to solving a great mystery. A long way lies behind you, and you know that many challenges still lie ahead; but here, so close, is something you’ve been waiting for a long time. Now all you need to get past is … 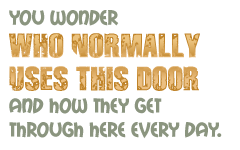 A simple wooden door stands between you and the next step of this adventure. But wait! There’s something strange about this door. Several objects seem to be attached to it, and there’s no keyhole. Weird.

Coming closer, you realize the objects are actually sliders. On each slider there are twenty-seven mystical symbols that seem faintly familiar. Gingerly, you touch one of the sliders, and it moves – but as it does, the symbols on the other sliders change! Hmmm. You move another slider, and the same thing happens again. You begin to see a pattern. A very complicated pattern.

You move the sliders several times, but you don’t seem to be making much progress. You’re not even sure that the complicated pattern is really a pattern at all. What the hell is this?

You shove the sliders back and forth several more times. You stare at the door that is keeping you from continuing. You move the sliders again, and maybe there is a pattern, but you suspect it would take several pages of notes to figure out. You wonder who normally uses this door and how they get through here every day. And what’s with those symbols, anyway? Everyone you’ve met so far seems to be speaking English.

You apathetically poke the sliders around, knowing you could solve this, but this is like overly complicated math, it –

This is a wooden door, and you have an axe in your inventory. It ought to be possible … if this was real, it would be absolutely possible.

You open your inventory and take the axe, and you smash down the door. With every bit of wood that flies past your ears as you laugh maniacally, hacking and hacking, you are drawn back into the adventure, and now it is all real, and you’re there, and as you step over the splinters of those annoying sliders you see that you have found something truly remarkable, and your journey has only begun.

What you’ve just read is a scene I’ve always dreamed of including in one of my games. It gives expression to some of the most profound feelings and desires I have when it comes to videogames, a philosophy that can also be formulated in the following way: I hate puzzles.

Don’t misunderstand this. I don’t hate them a little, like scratchy pullovers, but with the full unreasoning hatred I reserve for Margaret Thatcher, broccoli and postmodernism. They are stimuli that provoke in me a reflexive emetic reaction and an instinctual drive to set things on fire. More than one game has made me go from very happy to very grumpy in a matter of seconds by throwing a puzzle at me, and some games went so far that I completely lost interest. “Oh great, it’s a puzzle!” is not an exclamation of joy. 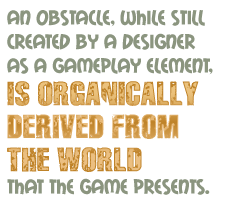 This might seem odd coming from a game designer, especially one whose work is mostly – five out of six games – in adventure games. On top of that, my favorite two types of games, if you were to ask me, are adventure games and RPGs. Aren’t puzzles an essential part of those genres?

Well, that depends entirely on your definition of a puzzle. To me, a puzzle is an artificially set up conundrum, a riddle, a brain-teaser. It’s having to figure out the correct order in which to pull the levers, or where to move the blocks, or which button makes which other button inactive. It’s making me play Towers of Hanoi or forcing me to solve mathematical problems.

A puzzle will invariably throw me out of the game’s narrative, turning gameplay into something that reminds me more of being in school than of a genuine artistic experience. It’s the ludic equivalent of those people who think the greatest fun in the world is to go around saying things like, “So, ten people get onto a bus, and seven get out. Then two more enter, and three get out, and the bus has forty-seven seats, and …” just before getting punched in the face.

If all of these complaints sound like the ravings of an anti-intellectual fool who wants games to cater to the lowest common denominator, they’re not. First of all, there’s nothing terribly intellectual about puzzles, even if that particular myth is often repeated by obsessive puzzle gamers (and puzzle-game-making companies). A person who has a good memory, or who is good at math, or has a perfect sense of all things geometrical, does not have greater insight into the philosophical, ethical, theological or practical matters that confront humanity and the individual. The action gamer shooting mutants on his computer and the random person solving sudokus on the train are both using their brains; neither can claim to be superior to the other on the basis of their brain’s ability to crunch numbers of one type or another.

Why do I still play (and make) adventure games, then? Here’s why:

I hate puzzles, but I love obstacles.

The difference is in integration: A puzzle is a purpose unto itself and follows its own rules, but an obstacle is part of the game world and the gameplay. An obstacle, while still created by a designer as a gameplay element, is organically derived from the world that the game presents. A slider puzzle on the kitchen door is just a puzzle; needing to get the key from the cook is an obstacle. Having to learn base 16 math because the designers want to test your intelligence is a puzzle; needing to learn it because you’re on a giant ship built by aliens to test the intelligence of various species is an obstacle.

The last example actually demonstrates that this is not an absolute system of categorization. Sometimes puzzles are meant to be puzzles, because the setting requires a puzzle. But the difference that integration makes to how a game feels is apparent even in games that are all about puzzles: Take Riven as an example. A lot of games have tried to ape Riven, but most have failed, including some of that game’s sequels. Why could Riven create such enthusiasm in so many players when other games, with equally devious puzzles and equally pretty graphics, could not? A significant part of the answer to that question might be in the puzzles. The Age of Riven is full of mechanical artifacts that the player has to understand and/or repair – but what the Age of Riven is not is an excuse for putting together a bunch of puzzles. Riven is a place, and the artifacts are an essential part of that place, a natural outgrowth of the civilization that inhabits it.

Perhaps this is being unfair to puzzle-based adventure games. After all, aren’t puzzles what the players want? Why blame a game for delivering what its audience desires? But then why string these puzzles together in the form of a narrative? Because Myst did it? Because Riven did it? Or is it perhaps because somewhere deep down most of us do want a story? Either way, if the world and the puzzles are not tied together, they will eventually fall apart. Not everyone minds this, but I’ll be bold enough to claim that most people do.

Let’s leave puzzle-centric games alone and think about games in general. Again and again, game designers feel the need to break up regular gameplay with puzzles of one sort or another. Here the distinction between puzzles and obstacles becomes supremely important. If the gameplay so far has been good and the player is immersed, a puzzle can very quickly damage that immersion and take the player from experiencing a world to just playing a game. If the gameplay has been mediocre, the frustration can be enough to make a player quit. And if the gameplay has been bad enough to make the puzzle more interesting than the rest of the game … well, in that case the game designers have more serious issues to worry about.

But what if the truly immersed player encounters an obstacle and not a puzzle? If he or she is really experiencing art at its most successful, that is art that has temporally become reality, then encountering an obstacle will simply confirm and strengthen that reality. And if the player is only semi-immersed, a well-conceived obstacle may be enough to transform an enjoyable experience into a memorable one. An obstacle turns a level into a place, a game into the chance to interact with another world. It allows us to use our problem-solving skills in the support of narrative, and so we become part of the narrative. Puzzles throw us out of the story – obstacles pull us in.

Context, in art as in life, is everything.

Jonas Kyratzes is a writer, director and independent game designer. When he’s not working, he plots with a small black feline and rides the solar wind. He also has a website, but it smells of mushrooms.

The Jewel in PopCap’s Crown