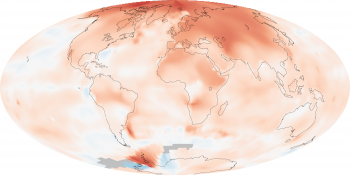 Report says that there is “robust evidence” for global warming as a threat to national security.

The UN-sanctioned Intergovernmental Panel on Climate Change (IPCC) is releasing a new report that connects global warming with global security problems, including civil wars, refugees, and tension between nations. The report includes a 63-page chapter on security problems in which it says that there is “robust evidence” that “human security will be progressively threatened as climate changes.” The IPCC is not claiming that climate change will cause violence, but rather that it will be an additional factor in the destabilization of nations, as conflicts over resources such as water and energy break out.

“Climate change will not directly cause conflict – but it will exacerbate issues of poor governance, resource inequality and social unrest,” retired U.S. Navy Adm. David Titley, now a Pennsylvania State University professor of meteorology, wrote in an email. Titley, who wasn’t part of the IPCC report, went on to say that “if you are already living in a place affected by violent conflict, I suspect climate change becomes the least of your worries.”

In its strategic review earlier this month, the U.S. Department of Defense called climate change a “threat multiplier” to poverty, political instability and social tensions worldwide.

In December 2007, the IPCC was awarded the Nobel Peace Prize “for their efforts to build up and disseminate greater knowledge about man-made climate change, and to lay the foundations for the measures that are needed to counteract such change.”