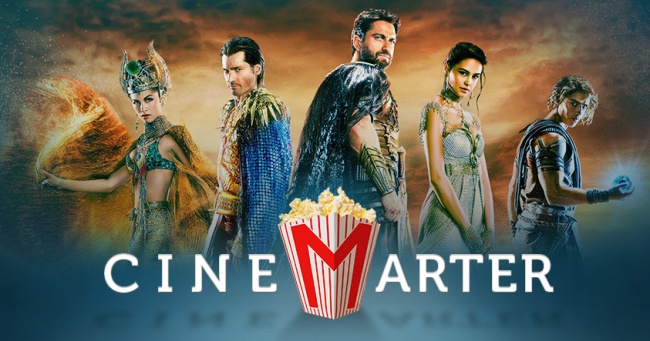 Okay, let’s get the elephant in the room out of the way now. Yes, the majority of Gods of Egypt‘s primary cast members are White. This is disappointing considering the place and time period in which it is set. Both the studio and director have apologized for this – and, to be fair, many of the extras are of different races. And it’s about as historically accurate as any fantasy movie, so there’s that, too. Does it become a problem while we’re watching it? Not a big one, no. Would it have been nice to see? Of course, especially considering few of the film’s actors are box office draws to begin with. But there are a lot bigger issues with Gods of Egypt than this. So, while it’s fair to criticize Gods of Egypt for its Eurocentric casting, this is all that needs to be said about it from my end.

Gods of Egypt is an utter disaster – the type that’s fascinating and kind of fun and funny to watch. This is the cinematic equivalent of a train wreck. It’s hard to take your eyes off it once it starts, even though nothing is working. It’s only worth watching for its unintentional humor, but anyone going in expecting a good movie – if anyone who saw the trailer and still expected one, that is – is going to leave very, very disappointed. 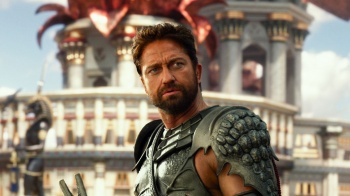 The film followed both a god and a mortal who need to save the world. The mortal is Bek (Brenton Thwaites), a thief who is in love with Zaya (Courtney Eaton) but doesn’t think that the gods do them all much good. The god is Horus (Nikolaj Coster-Waldau), whose uncle, Set (Gerard Butler), kills his father (Bryan Brown) before Horus can be named king. Horus’ eyes are also stolen, and Set becomes de facto king as a result. But Set is evil and tyrannical, so he must be stopped. As such, Bek steals back one of Horus’ eyes and the two head out on an adventure – they must collect Key Items and Party Members before fighting the final boss – with the end goal of stopping Set and returning all the land back to the way it was before.

As far as plots go, this one is unbelievably unoriginal. If you were to make a videogame set in ancient Egypt and featuring the gods, this is probably exactly what you’d do, but maybe with different gods in the major roles. The writing doesn’t exceed even the most mediocre of game writing. The dialogue sounds like it was written by a child who wanted to be super-duper cool. It’s impossible to take the film seriously because of this. Well, this and the CGI.

Lionsgate, the main studio behind Gods of Egypt, anticipated the film being the first in its next big franchise. $140 million went into it, presumably 80% of which was for the special effects, because the entire movie feels like an exercise in excessive CGI. I don’t know how many sets were built for this thing, but it couldn’t have been very many – and even in the scenes where you can tell they’re standing in real places, a great deal of noticeable CGI was used either to change things up or for the background. From start to finish, the effects look unfinished and unconvincing, and the lack of quality and polish takes you out of the experience. Or, since you’re unlikely to get sucked in to begin with, it provides more ammunition for the inevitable riffing when you get together with friends to laugh at the terrible movie.

Not even the action is any good. It’s bland and uninspired, for one, and while I appreciate that it’s not shot and cut together in a way to prevent us from seeing anything, what we’re seeing isn’t exciting or entertaining. And this is a movie with a key scene in which our protagonists have to fight off gigantic snakes. Any fight involving Set or Horus is so dull – and almost all of them have one, the other, or both. But I guess it makes sense that a film with this much laziness wouldn’t put any thought into the action. Its best action might come from the couple of scenes in which Bek has to use his magical thief skills to get past impossible traps, but they just serve to remind us of how great the first three Indiana Jones films are.

Even really good actors would struggle to make this material feel anything less than brain dead. Gods of Egypt‘s biggest box office draw is Gerard Butler, but since Butler isn’t a good actor, his inclusion doesn’t help the film. He’s hammy, but nothing more. Nikolaj Coster-Waldau is a fine actor, but here he’s dressed up like Snake Plissken and saddled with dialogue that’s too silly to take seriously. His arc – and the movie’s main theme, I guess – is so uninspired and on-the-nose to ensure that you don’t miss it. He even looks stiff during the fight scenes. Brenton Thwaites is the only one trying for charismatic – he’s our protagonist, technically – but he fails so hard that it’s genuinely hilarious. Poor Geoffrey Rush is given CGI so bad it makes the suit in Green Lantern look incredible, and even Rush can’t make us accept it. It’s all garbage. Glorious, terrible garbage.

I was, however, left wanting more – at least, of this universe. All these various gods and their powers, domains, and relationships – this is some fun and interesting stuff. We get a little bit of it from time to time, and all of it feels like it has the makings of a good movie. Gods of Egypt is kind of interesting in that they got a good director in Alex Proyas and it was given a large budget, but they hired the writers of Dracula Untold and The Last Witch Hunter and cast almost nobody of consequence. It’s baffling and fascinating, even if the result is a really bad movie.

Lionsgate and Alex Proyas may have apologized for the whitewashing that came when the film was being cast, but they should have apologized for Gods of Egypt being terrible. This is an atrocity, but it’s also unintentionally hilarious for most of its running time, and I wasn’t bored for most of the time. I laughed at its juvenile and stupid dialogue, its awful CGI, and its ridiculously generic story. And I’d rather laugh through a terrible movie than be bored through one. So, kudos to Gods of Egypt for being so abysmal that it is, at times, kind of enjoyable.

Bottom Line: Being this unbelievably awful and expensive makes Gods of Egypt more enjoyable than a bland film, but all the unintentional laughs in the world can’t make up for how bad it really is.

Recommendation: This is one of those films you rent late at night with some friends just to mock.