I often wonder why gamers, myself included, always seem to be so unhappy. There seems to be far more complaining than discussion or conversation on our forums. We bitch and complain, feel entitled to everything. We want it right now, preferably for free, and to hell with whatever publisher doesn’t give it to us. A PS3 price cut. A patch for a game released just last week. A Zelda game that is mature, cell-shaded, first-person, whatever the flavor of the week is.

Forums, official and otherwise, are littered with these requests – nay, demands – often even from before a game goes on sale. Fanboys of anything are, as we all know, impossible to satisfy, but it seems like when it comes to gaming everybody is a fanboy. Unlike, say, watching movies, gaming is a hobby that is hard to enjoy on a (dare I say it) casual basis. The amount of time and money required to follow both the demands of playing the latest software, and keeping up with the pace of technological change, almost makes gaming something in which you can only either be all the way in, or all the way out. This devotion of time and energy has one consequence: it makes everybody, myself included, an elitist, and a complainer.

And in turn, it is to these people that the industry sells. One of the reasons why gamers come to expect so much is that the industry undoubtedly forces these expectations upon them. Hype is a poison that has seeped into the core of this industry. This, after all, is the industry that labeled the original PlayStation as “more powerful than God” and comes up with more outlandish claims for every generation.

We try to sell modern videogames like blockbuster movies, with something for everybody – the latest hit is always hyped up to have the greatest graphics, the most incredible gameplay, the most gripping story, the most addictive multiplayer, all in the one package. It won’t be long before we start promising a tear-jerking love story with every new blockbuster, to attract the all-important female market. Needless to say, very few games actually live up to this promise.

The way we market hardware and software reminds me of the story of the Ford Edsel, one of the biggest failures in the history of the car market, and a lesson that now appears alongside New Coke in studies of marketing pitfalls

The Edsel was the automobile equivalent of a curse we see all too often in gaming – a product that was developed and marketed without regard for what the customer wanted, “a textbook example of corporate presumption and disregard for market realities” according to one automotive journalist.

Ford promoted the car, which launched in 1958, with a two-year marketing campaign, making outlandish claims that it was “the first totally new car in 20 years”. It was marketed with the equivalent of today’s irritating teaser campaigns – shots in magazines that made it difficult to see the whole vehicle, or others only showed close-ups. Ads in magazines declared “the Edsel is coming”; pamphlets promised customers that “there has never been a car like the Edsel”.

But customers didn’t buy it. The Edsel launched in the middle of a recession and while hype surrounding the car was high, like many heavily-hyped games it did not translate into sales. By all accounts the Edsel was an unreliable but not a terrible car, but the biggest problem was that Ford pushed the Edsel too hard and couldn’t deliver what they promised. It was not an all-new car or a revolution in automobiles – it was a pedestrian car with a high price, a silly name and an odd grille that some customers described as being like a “vagina with teeth”.
Comparisons with the PlayStation 3’s staggering initial price point and George Foreman Grill meme-spawning looks leap to the mind, although the PS3, which is still struggling to define itself, will never be anything close to the failure the Edsel was.

This is a problem that everybody in the games industry is guilty of. Our copywriters speak only in breathless hyperbole; we talk of new IP in terms of “franchises” before even a single copy has been sold. While Sony’s bold claims of the PS3’s horsepower are the first to spring to mind, there are many others – Bioshock‘s claims that every playthrough will be a completely different experience; Nintendo’s promising control with the Wiimote that they clearly knew was not possible with the launch technology, and which requires the MotionPlus add-on to bring to life; most games that Peter Molyneux has had a hand in. 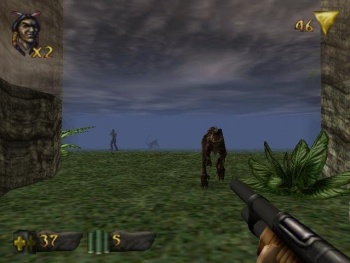 We will often buy into this hype at first, leading to today’s massively over-inflated review scores, only to come back to these games six months after launch and realize that Halo 3‘s single-player was disappointing and its multiplayer less balanced than its predecessor; that GTAIV was not cinematic but overly serious and less fun than San Andreas; that Spore was not a universe simulator but five rather shallow games put together into one package. It’s a trap we all fall into – one of the biggest games on my horizon right now is Heavy Rain, a game that could probably never live up to expectations that I have conjured for myself on the back of the incredible glimpses we’ve seen so far.

Of course, we gamers hold just as much responsibility for our perpetual unhappiness. For the average gamer today, everything is amazing and nobody is happy. As the comedian Louis CK notes, “we live in an amazing, amazing world and it’s wasted on the crappiest generation of spoiled idiots”.

Louis CK spoke of computers, cells phones and aircraft but you can just as easily apply the concept to games. Nostalgia, as they say, ain’t what it used to be. To give one example, I remember a time when the N64 game Turok: Dinosaur Hunter sold for $70 (and even more ludicrous prices in Europe) and featured no multiplayer mode, online or otherwise; no lavish cut-scenes, no voiceovers from Hollywood actors; and the most fog you’ve ever seen outside of Sherlock Holmes-era London. Still we were glad to pay it (if memory serves, we also trekked three hours barefoot through the snow to buy it, uphill both ways).

Compared to that, the $60 Halo 3 is both a masterpiece and a bargain. Although sometimes I think I would gleefully accept the chance to live in a world without Twitter, I realize it is the same world that also gives me my beloved suite of Google applications, one of which I am using to write this article right now. Barely ten years ago I was using floppy disks to take my data from one point to another. They held less than 2MB of data and could be corrupted if I left them too close to my mobile phone (which had a monochrome single-line screen). As much as the festering morons who populate Xbox Live irritate me, it’s a cheap and convenient way to play games with friends and family around the world. Around the world! In different countries and time zones! It’s practically a form of time travel, for God’s sakes.

So if Heavy Rain ultimately does not live up to my unachievable expectations, so what? If Peter Molyneux’s next project has a litany of broken promises, who cares? Even the worlds created by some of the worst modern videogames are still amazing in their own rights.
We spend hours hyping the latest game before its release, and more complaining about it when we finally have it. Maybe we actually look forward to the disappointment. And maybe we should try to be both more cynical and more forgiving; less willing to buy into the hype, and less easily disappointed by it. The industry too should learn the lesson of the Edsel and bring gamer’s expectations back to earth – because for the industry as a whole, if we oversell our product, all we’ll have is lot of disappointed ex-customers.

Christian Ward works for a major publisher. The other thing Turok: Dinosaur Hunter featured was the most dreadful first-person platforming sequence Satan himself could conjure.