Was it me, or did most of us seem to collectively ignore the sequel to the biggest-selling single-platform videogame of all time?

Wii Sports Resort launched worldwide over the last month, finding instant success in what is generally considered the most terminal of dead periods by publishers. It has, in conjunction with the launch of a black Wii model and Monster Hunter 3 in Japan, put an end to another spat of “the Wii is a fad” articles and gave a much-needed sales boost to a stagnating videogames market.

It’s staggering to think that such a simple game is projected to sell 10 million copies worldwide in this fiscal year alone – by way of a meaningless comparison, more than the late Michael Jackson’s Bad sold in the US in 20 years. Or by way of a more meaningful one, about as many copies as Halo 3 has sold to date.

And yet, the places I frequent on the Internet for my gaming discussion seem to have barely noticed its arrival. Usually I am sick of hearing about the latest blockbuster two weeks before it hits the shelves. In Wii Sports Resort’s case, it was on the shelves before I was even aware of it. Have we missed the ball on this one?

I call Wii Sports Resort “simple” but I do not mean it as an insult. It’s the good kind of simple – uncluttered, unfettered, free of pretensions – and it stands in stark contrast to so many of today’s overblown games. Had I, or just about anyone else who was not on the development team, sought to create Wii Sports it would be filled with cups, tournaments, options – the things we are accustomed to with a few additions on top. Exactly the type you would expect.

But Wii Sports is successful precisely because it does not cater to what we expect. In many ways it is the exact opposite of the Nintendo’s only other successful sporty series, Mario Kart, which has become a very predictable combination of cups and secret courses. Its structure is unusual, designed around a freeform multiplayer experience. Beating all the games does not open up new sports.

It is this seeming simplicity that results in its being derided by “hardcore” gamers and much of the gaming press. Now, I understand Wii Sports is not for everyone, and that’s fine. Gamers who want to ignore it should feel free to do so. But it seems that the world of gaming journalism could at least do a better job at pretending that Wii Sports is for someone – in fact, a very, very large group of someones. The someones who are doing that thing we are supposed to love and champion – playing games.

In its admirable quest to interact with its most loyal users – the people who live and breathe gaming – games journalism is in danger of becoming more of an insolated fringe, finding itself ever more out of touch with the type of games that people are actually buying. For better of worse, these include a lot of Wii, DS and iPhone games that do not fit in the established category that we consider as gaming.

I first started to think about how out of touch the games journalism world has become with the industry in general when the demise of EGM was dominating the news cycle earlier this year. Suffice it to say that if EGM actually had as many sales as it had virtual column inches over those weeks, it would never have found itself in such dire straits in the first place. 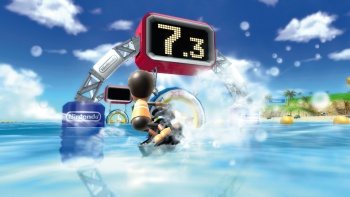 The writing had been on the wall for EGM for a long time, much as it is for the print industry in general. While EGM readers stayed for the sense of community and attachment to their favorite writers, there was only one reason they came in the first place: for the latest news about the games they cared about. The Internet does a far better job at both of these than print could ever hope to, and more importantly, does so for free. If no one website provides as good as experience as the best print magazines did – and indeed, none of them really do – it doesn’t matter, because you can visit as many sites as you need to get the balance you’re looking for.

For fans of those magazines that, like EGM, were more than just a poorly-laid-out rehash of press releases, that is a depressing thought, as the quality of writing on the Internet (obligatory Escapist-excluded disclaimer here) has never seemed to live up to that of the greatest magazines. It’s sad that so many multiplatform gaming sites, which should and do know better, cynically exploit the fanboy-ish nature of gamers to boost their own hits, or that with all the technology at our hands, most gaming websites still perpetuate the same cycle of preview/hype/review/letdown.

As the games industry as a whole swings to the mainstream, the existing specialist press will find themselves becoming ever more niche. But mainstream coverage of the games industry is still incredibly lacking. Much like any other part of gaming, the press must also face up to change. What we gamers consider to be the core of the industry is being pushed to the side by the changing economics of the market, and games journalism is not changing fast enough to keep up.

Trying to find decent, intelligent coverage of games on the DS, for example – surely the world’s most ubiquitous platform – can be a nightmare. As a reminder, there are close to 110 million DS units on the market – well over three times the amount of iPhones. Tell me you’re not sick of hearing about them. Tellingly, so near as I could tell, a DS game never made the cover of EGM. I’d be curious to know how many multiplatform magazines have, or how many featured Wii Sports Resort on their cover.

I’m not saying this out of bitterness, but out of regret – I would hate to see what was once the valuable voice of the majority become nothing more than a tiresome complainer on the sidelines, demanding a return to glory days that will never come again. Especially given the fact there are so few decent alternatives. But it seems to me that the biggest challenge the overcrowded world of games journalism stands to face over the next few years is one of relevance. Step one is to start talking about the games people are playing – even if we don’t particularly like them.

Christian Ward works for a major publisher, and does miss glossy magazines – just not quite enough to pay for one anymore.