These will be the last words I will write as Editor-in-Chief of The Escapist. After five years, six Webby Awards, two Streamy nominations, a G.A.N.G. Award nomination, two dozen video series, over 1,000 written articles, hundreds of millions of page views, quadruple digit percentage traffic growth and a Time Magazine “50 Best Websites” mention, I have decided that it is time for me to move on to new adventures. I will be leaving on Wednesday, September 14th and Managing Editor Steve Butts will be stepping into the role of EIC. 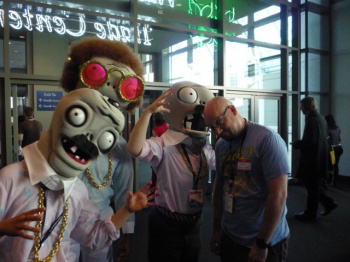 When I first applied to work here it was because I had decided that writing about videogames was going to be my next adventure, and I could think of no better place to do so. The founders of The Escapist had sought to bring print-quality, European-style writing to the field of videogames, tinged with a wholly American iconoclasm and they succeeded beyond their wildest imaginings. To that striking formula, I brought an eye for pleasing a broader audience and worked with the site’s founders and excellent original Editorial team to expand our reach into reviews, news, short-form features and, of course, video. What we’ve accomplished in the six years since has been nothing short of remarkable, and was the product of many minds. I did not do any of it alone, nor could I have. Every obstacle we’ve overcome has been tackled through teamwork. Every award or accolade has won by the sweat of every team member. Every celebration has been a family affair and every bad day has been shared by all.

There is a story about my first day at The Escapist that I don’t get to tell as often as I would like. I was living in Boston when I was hired. I interviewed over the phone, and rented an apartment sight-unseen. I quit my theater job, shut down my life in Boston and drove the 700 miles to Durham with my belongings in a Ryder van. When I got here the entire company was waiting to help me move into my new home. I hadn’t met them, or they me, but there they were, welcoming, friendly and ready to get to work. Most of those particular people are gone now, having moved on to their own next adventures, but that was the spirit of the company for which I had driven two days and a lifetime to work and that sprit has persisted.

The videogame industry, on the other hand, is starkly different now than it was then, and so too is videogames media. I am proud to say that The Escapist has kept pace and capitalized on the changes. Even helped bring about some, if I may be so bold. When I started at The Escapist, the Xbox 360 was not even a year old, and the Wii had yet to hit store shelves. Hundreds of MMO developers were still convinced they were working on the WoW killer. The only cell phone that played games was the Nokia N-Gage (the first one). Facebook was still unique to college campuses, and wholly without games. Twitter didn’t exist. And The Escapist was a small webzine with barely 200,000 regular readers. Today, we have millions.

How does one walk away from a place that has meant so much? A place that is what it is today as much as a result of the sweat and toil one has spent there than for any other reason? Straight onward, head high. Proud of past accomplishments, but looking ahead to new challenges.

The Escapist will always strive to innovate, but at every internet company there comes a time when the pace of change slows and the focus shifts from building to strengthening. From cowboy pioneerism, to methodical homesteading. The Escapist is entering into just such a phase and, for me, the change marks an appropriate time to explore new opportunities. I leave behind one of the strongest, most talented editorial teams with which I have ever worked. I have no doubt they will carry on without me, just as ably (if not more so) adapting to the challenges ahead and succeeding their way into many more years of The Escapist‘s as-yet unwritten history.

As for me, I have no idea yet what adventures lay in store. The pleasure to which I am most looking forward is taking a day or two off to stare blankly at the trees. Catch up on some gaming I’ve missed. Perhaps sleep. After that, I honestly do not know. If I had to guess, I’d say to look for me at the fringe, where the rules have yet to be written and a word-slinging cowboy like me can lay claim to a few acres of empty digital space to build something the world has never seen. Or, perhaps, I may just try to infiltrate the old guard and show them how we do it at the place that’s won more web awards than practically any other online publication, ever. Break some things and then build them back, better. Or I may head into other avenues of expression entirely. Gaming is but one of my many passions, and not always the most dear. There is plenty of work to be done to protect our American wilderness and ensure that our inalienable rights remain so. I can think of worse ways to make a living than by assisting those who fight for political causes about which I care deeply. I also enjoy sailing, so, who knows?

Wherever I go next, I will not forget my time at The Escapist, my generous coworkers who made every day worth waking up for, the community and fans who keep coming back to see what we’re cooking next and the virtual army of freelance collaborators with whom I have had the pleasure to create some of the finest content ever published in any medium. Thank you all for letting me share this portion of your lives with you. I am unable to adequately express how much a pleasure it has been.

Russ Pitts has worked at The Escapist since May of 2006 and has been Editor-in-Chief for the past two years. His blog is at www.falsegravity.com and his twitter is @RussPitts