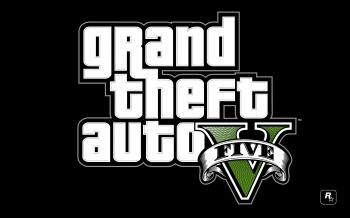 In GTA V, you play as a terrible person. Well, three terrible people really, the game’s major gameplay innovation from its predecessors being that you can play as three different protagonists. Driving through Los Santos and the rest of Blaine County – a representation of Los Angeles and the surrounding California countryside – is still the highlight of Grand Theft Auto V, and it does make you feel like you are really part of the criminal underworld of a morally bankrupt city. But it’s only worth playing if you are ok with being the bad guy. No, a really bad guy.

Now, you may say, that’s the hallmark of the crime genre Grand Theft Auto spawned, at least in videogames. But some of the events and missions of Grand Theft Auto V feel more malicious and, well, evil, than the comparatively light-hearted violence of most games, the recent Saints Row 4 being a perfect example. What’s missing in GTA V‘s story is a sense that the characters have been painted into a corner by various machinations beyond their control, like Niko Bellic of GTA IV, or must commit their crimes to mete out justice, as Tommy Vercetti does in Vice City. The three main characters of GTAV do terrible things merely to get paid, and deserve no sympathy. There’s no drive in them even to be the best at what they do, the last American value we afford criminals, but rather they commit these crimes with no lifeline thrown to the audience to pull us along in supporting them. It is the difference between The Godfather Part 1 and Part 2, between Inglorious Basterds and Triumph of the Will, and between Just Cause 2 and JFK Reloaded. In the former examples, the audience can get behind the anti-heroes depicted for whatever reason and condone their admittedly awful actions, but in the latter group, the subject matter or the protagonist’s morals are skewed too far from the norm to be comfortably witnessed.

That’s what it’s like to play Grand Theft Auto V. The three men you take control of throughout the game aren’t even anti-heroes. They’re just scumbags.

That’s not to say the protagonists don’t end up charming you as you navigate them through their horrible lives. Franklin disrespects everything and everyone in his rundown neighborhood, but somehow forges a bond with a middle-aged white man, Michael, in his search for a way to become more than a crackhead. Michael is a retired stick-up man, grown sick of his Vinewood mansion, sniveling teenage kids, and cheating wife. When he mistakenly rips down a Mexican gangster’s house – it must be pointed out Michael meant to rip it down, he just didn’t know how much it would cost him – Michael enlists Franklin to help him back into the heist game to make money. Then there’s Trevor, who is busy expanding his meth lab empire in the hills outside Los Santos by stomping bikers in the face. Seriously, Trevor’s introductory scene begins with him screwing a scabby woman from behind, and then stomping her boyfriend in the face until he’s dead when the cuckolded man has the nerve to confront him. See? Charming!

The city of Los Santos is as much a character in GTA V as those guys, and it’s just as depressing a representation of humanity. The highways, avenues and streets of the urban landscape are artfully represented, evoking specific neighborhoods and locations in Los Angeles just as Liberty City does for New York. Advertisements and billboards for products like Pisswasser beer and LifeInvader, a parody of Facebook, are supposed to be funny, I suppose, but the radio jingles and faux talk radio spots come off as childish instead. Pedestrians take calls on their cell phones, and overhearing what they say to their lovers, their mothers and their agents creates an aural kaleidoscope of a culture obsessed with self-image and fame, none of it especially pleasant. Satire excels at pointing out our foibles, our faults, but that doesn’t mean it makes for great escapism.

You’ll drive thousands of miles in various vehicles traveling to mission locations, landmarks and shops. Cueing up your favorite radio station from the 17 available and taking in the scenery is the best part of Grand Theft Auto V. Driving is forgiving, and your inevitable crashes have a low chance of tossing you through the windshield or flipping over your car permanently. Not only can you nab the fastest or best-handling car on the road for a more pleasurable ride, but you also level up each character’s driving skill as you play. Franklin starts out as the most expert driver, and he has a special ability that slows down time for a short period to allow you to navigate around corners and between cars. Using the ability to win races and escape cops is very fun, and the RPG-lite mechanics of leveling provide some structure to the experience. 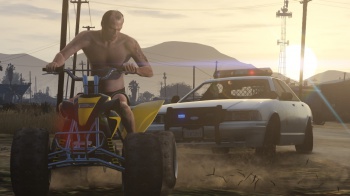 It’s hard to make it as a gangster without firing a gun, and you’ll slowly build up your arsenal as you progress through the story missions. Aiming is assisted by locking on to targets, so you don’t have to be an expert shot to take out a dozen gangbangers, but it does take some skill to get those headshots. Trevor is the most offensive protagonist, and his special ability increases his damage and lessens damage taken to make him a rampaging whirligig of death, complete with snarled expletives and foaming at the mouth.

If you can stomach his tirades, Trevor can be really useful in hairy situations, but you can also level up any character in shooting skills by heading to targeting ranges within some Ammunation stores and earning medals. Michael is the stealthiest of the bunch, and can pack quite a punch if he sneaks up behind a guy. Leveling up stamina comes through exercise, and the minigames of tennis and golf are wonderful little diversions worthy of their own titles. Don’t worry, though, the skill advancement doesn’t feel forced or inorganic, and it helps to differentiate which of the three protagonists you want to use in a given situation.

Of course, there are far too many moments when you don’t get to make that choice, and it makes you wonder why there are three main characters at all. The game establishes pretty early that Franklin is good at driving, but there’s action sequences in which Michael is the driver because that’s just how it’s scripted. There are also certain establishments only particular characters can purchase and derive income from, which forces a specific linear progression, as well as moments when you can’t switch characters at all. A more open sandbox would have been appreciated.

All this gameplay comes together with the heist missions. All the characters want money, and the easiest way for them to get it given their skills is to rob a few joints. The major heist missions serve well as the backbone of the game. Assembling the team and choosing a plan, then executing on it, makes you feel like a criminal mastermind. You level up crew members the more you use them, so it really feels like you are hand-picking your crack team each time you plan a caper.

Technologically, Grand Theft Auto V deserves the mantle as the pinnacle of this generation. You are forced to install the game code on your Xbox 360’s storage – a USB drive will suffice if you don’t have the space – but doing so reduces the load times immensely. The static mission loading screens are gone; you start watching a cutscene briefing seamlessly whenever you walk up to a character. The area you can explore is ginormous, and it encompasses so many different terrain types and landmarks that it’s almost silly. Nothing hammers home the scope of GTAV more than when you play in your first aerial mission. Flying a plane across the state of San Andreas, seeing the sun set behind the mountains and knowing there’s missions to complete, characters to meet and cars to steal across each inch of the landscape beneath you, is breathtaking.

If only the morally reprehensible script written by Dan Houser lived up to the achievements in game-making that Grand Theft Auto V otherwise embodies, it would be not just the game of the year but of the decade. Unfortunately, you can only hear a character say “&^%@ you, Mother&*^%er” so many times before it starts to grate on you. You can only embody a vicious psychopath a short time before it becomes boring, at best, and soul-crushing, at worst. Forcing players to murder people, not in a gamey “I killed you to complete a goal” way that defines this medium, but in a terrorizing and demeaning way, is not what will make videogames great. Rockstar had a chance to elevate, and they wasted it on portraying characters you don’t want to spend five minutes with, let alone the hours it would take to play through the game’s story.

Bottom Line: A technical achievement, GTAV‘s driving and shooting gameplay in an excellently crafted open world is marred by a script that presents despicable characters as the protagonists.

Recommendation: It’s certainly fun to be the bad guy sometimes, but only buy Grand Theft Auto V if you’re prepared to play as characters with no justifiable motivation for doing awful things to people.