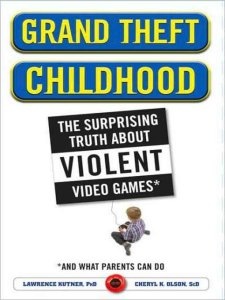 Today marks the retail release of Grand Theft Auto IV. If many analysts are to be believed, the latest installment in the lucrative but notorious franchise will sell as many as nine million copies. And if certain politicians and activists are correct, it will almost certainly lead to widespread youth depravity and violence. But if the authors of Grand Theft Childhood are right, parents actually have very little reason for concern.

Grand Theft Childhood: The Surprising Truth About Video Games and What Parents Can Do is a thoughtful look at videogames and youth violence, authored by husband and wife researchers and media columnists Lawrence Kutner and Cheryl K. Olson, Cofounders and Directors of the Massachusetts General Hospital’s Center for Mental Health and the Media. As its subtitle implies, the book’s authors intend to offer parents sound guidance and advice in response to current anti-gaming sentiments.

Kutner and Olson introduce their subject, in part, with an overview of a $1.5 million study on youth violence and gaming they coordinated at the Harvard Medical School between 2004 and 2006. Funded by the U.S. Department of Justice, its core components were written surveys from more than 1,200 middle school students and over 500 parents, and interviews with dozens of teen and preteen boys and their parents. The authors also conducted a review of the findings and conclusions of past research literature.

Not surprisingly, Kutner and Olson discovered that the vast majority of their young male subjects regularly played violent, M-rated games. In fact, among the boys they surveyed, the GTA games were among the most frequently played titles. Somewhat less expectedly, among young female subjects the GTA titles were second only to The Sims games in terms of their popularity.

But did exposure to violent video games correlate to violent or antisocial behavior among these youth? Not likely, say the authors. Although their research found a statistical relationship between exposure to M-rated games and some problem behaviors, Kutner and Olson contest the assumption of a causal relationship between the two. In fact, their research uncovered evidence that for boys, a lack of exposure to video games is associated with problems including shoplifting and fighting.

Throughout Grand Theft Childhood the authors note the inescapably social aspect of games, especially for young males. For boys, playing videogames – even M-rated video games – is normal. It connects them with their peers, providing both recreation and a source of conversation. The authors demystify kids’ interests in games, noting that their motivations to play aren’t borne of reclusive or antisocial tendencies. Instead, kids play for excitement, escapism and to relieve stress or boredom. In addition, kids are surprisingly capable of recognizing the difference between in-game and real-world violence – sometimes even more so than the researchers themselves.

Kutner and Olsen believe that in some cases, excessive or ongoing interest in M-rated or violent games may be symptomatic of more troublesome issues. They note, however, that in such cases gaming habits are typically a minor issue in the presence of more obvious, deep-seated psychological or social problems. Kutner and Olsen conclude that, in most cases, parents “should not worry about violent or other M-rated games having a profound effect on their children’s behavior or values.” In addition, they caution against careless use of “gaming addiction” theories and therapies, which they note may be little more than repackaged “snake oil” treatments that demonize gaming at the expense of larger issues.

Kutner and Olsen address common misconceptions about gaming with deftness and precision, demonstrating that they understand both videogames and their detractors. Although their own research informs much of the book, they devote abundant space to reasoned discussions about junk science methodology, political grandstanding, recent developments in anti-game legislation, current events, and more. Grand Theft Childhood‘s chapters are peppered with quotes from public figures, which the authors usually waste no time in debunking through research or common sense.

Though their tone is consistently reasoned and thoughtful, Kutner and Olsen don’t pull any punches as they wade through misleading claims and outright nonsense espoused by activists and organizations such as the National Institute on Media and the Family (which they reveal as neither “national” nor an “institute”). Kutner and Olsen also tackle and explain both the flaws and benefits of the ESRB’s rating system, not to mention the content rating systems of other countries across the globe.

Along the way, the authors take pains to educate the reader about less mainstream but still readily available games that may be cause for some concern, including overtly pornographic, racist, or agenda-driven titles that may find their way onto the PCs of curious kids. They also discuss biased imagery in games, and note the increasing prevalence of games designed specifically to promote various products or brands. Rather than engaging in easy fear mongering, the authors note that such games may serve as a starting point for meaningful discussions between parents and youth.

What emerges over Grand Theft Childhood‘s 272 pages is a refreshingly nuanced examination of the effects of videogame violence. Although its authors raise numerous concerns and questions, their ultimate conclusion is that there are much bigger issues in the lives of children. As such, they spend the book’s final chapter making common-sense recommendations to parents: Stay involved in your kids’ gaming activities. Shift your perspective to the real-world issues in your kids’ lives. Maintain and encourage a high degree of media literacy. And, perhaps most importantly, focus on the real dangers that children face.

Grand Theft Childhood‘s most compelling message is one of caution. Kutner and Olson explain that efforts focused on violent video games “remove public attention and government funding from more important and powerful factors that are already known to lead to violence.” It’s a sentiment I’d love to hear echoed by the media in the weeks and months following GTA IV‘s release. One book may not be enough to turn the tide of misleading anti-game rhetoric, but Grand Theft Childhood is definitely a step in the right direction.