Greg Stafford – founder of Chaosium, creator of Glorantha (setting of the original RuneQuest roleplaying game), designer of the illustrious Arthurian RPG King Arthur Pendragon and 1987 inductee into the Adventure Gaming Hall of Fame – would, I think, make a good cleric. Though I know many RPG designers with high Intelligence (consistent, of course, with human racial maxima), I consider Stafford the wisest.

It might not seem “wise” to have started not one but three game companies, seemingly a folly to rank with the Maginot Line, TV reality shows and the Children’s Crusade. But as every Dungeons & Dragons player knows, the Wisdom attribute doesn’t imply prudence – or else priests would never walk into monster-ridden holes.

Nor is wisdom a superhuman ability to dodge trouble. Now 61, Stafford has endured life’s ordinary vicissitudes: a broken marriage, family strife, business setbacks and recurrent bouts (only recently diagnosed) of clinical depression. Yet he remains good-humored, active, gregarious and curious – a seeker still.

Stafford is also, still, a writer. As a college freshman in 1966 he conceived – or, as he unfailingly phrases it, discovered – his fantasy world of Glorantha, and through stories and games he has developed it unstintingly ever since. He founded Chaosium in 1974 to publish Gloranthan board games. He established Glorantha as the setting for RuneQuest’s first two editions, as well as for the later HeroQuest RPG and the 1999 King of Dragon Pass computer game. The early history of both Glorantha and RuneQuest is exhaustively documented online, and the setting has many devotees to this day. Some regard it not only as a backdrop for adventure but as, they might say, a tool for understanding.

In a galaxy of thoroughly developed campaign settings, Glorantha remains unusual and potent. Through it, Stafford treats of myth and the place of myth in our lives, drawing on his studies and his mystical experience in shamanic practices. (He’s on the advisory board of Shaman’s Drum Journal, “the leading magazine on experiential shamanism.”) The heroes of Glorantha, guided by the gods and cults of myth, rise in power and ultimately re-enact these myths through their own careers.

Where Stafford’s sense of myth permeates Glorantha, in Pendragon, myth works more like Fate, a hidden imperative that shapes eight decades of King Arthur’s life. Whole families of knights vie for Glory across the years from the Sword in the Stone to the final days of Camelot. An innovative, all-embracing virtue system aids in roleplaying knights of the British Isles, Christians and pagans, Saxon and Byzantine warriors, even Saracens and Picts. Drawing from every source in history and legend, Pendragon presents a matchless totality, one of the rare roleplaying books that stands as genuine scholarship. The game’s essential supplement, The Great Pendragon Campaign, is a breathtaking four-generation saga unrivaled in scope. Though he no longer owns rights to the game proper, Stafford now publishes his own line of licensed Pendragon supplements.

Stafford has written of the virtues of roleplaying: fun, education, creativity, empowerment. “Roleplaying activates a critical human process that has nearly been killed by over-rationalization and materialism. Roleplaying is a way for humans to interact with our deep, hidden mythological selves. They are a way to feed our souls.” 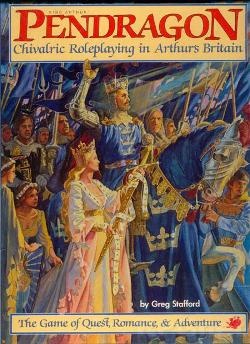 How, exactly, does roleplaying feed the soul? Stafford dislikes the term “spiritual” – “tricky word, loaded with crap for most people.” Instead, he explains it this way: “Human beings have urges that defy intellect and rationality, but exist anyway. And we have senses – non-material senses – to help us satisfy those urges. They are so hardwired that we are essentially unaware of them. Who ever thinks of “seeing” when we look around? It just happens.

“So what makes us curious, or funny, or loyal, or loving – or, more to this point, what makes us feel those? I’ll just call it the mystery sense for now. Nearly everyone has it. What we do with it varies, of course, but one thing’s for sure: It is better to use it than not. Why? Well, it’s not science here, but anecdotal life data has indicated pretty consistently that people without the mystery in their lives are unhappy, bitter, selfish, often spiteful, always unpleasant.

“Roleplaying is one way for us to stimulate that mystery sense. Furthermore, its tropes activate all kinds of deeper curiosity and let us exercise both beneficial and gruesome fantasies that lie dormant in us. Choose anything from great heroics to serial murders – what greater opportunities do geeks like us have than to seek these while sitting at a table of friends? Are we heroes as a result? Nah, course not. But we are friends with shared thoughts, and that is good for the soul. And when we romp through those tropes, something deep inside is exercised – the mystery stirs.”

I’ve known acquaintances who got deep into New Age nonsense about energy fields, inner knowledge, and so forth. Led into fog by nebulous concepts, lacking bearing or direction, they talked of “power” but never made anything happen. Stafford is nothing like them. He views the world using myth-based concepts I find eccentric, even freakish – but it’s hard to argue with his results. Both shaman and scholar, Stafford has always been firmly grounded in consensus reality. Far from weird, he’s pleasant, engaging and witty. Speaking at any desired level of seriousness or playfulness about, say, the importance of Elvis as a youth deity, he can entertain a restaurant table or a convention crowd – or his friends on Twitter and Facebook. (He posts only rarely – “I was told I ought to do that stuff for promo purposes, but I really have better things to do most of the time.”)

Most important, after three decades as one of the roleplaying field’s most honored and influential designers, Greg Stafford is still doing good work. “I have been concentrating on Pendragon material, lately The Book of Battle. It [puts] the player knights amidst thousands of others, all working more or less the way medieval armies worked. Imagine the battlefield as a setting for an adventure. It doesn’t have corridors or clues, but is an ever-shifting setting fraught with the greatest danger. These rules are basically a way for a band of adventurers to experience this setting. It can be used with any combat system.”

A college dropout in the ’70s, Stafford (“finally,” he says) completed a bachelor’s degree in Comparative Religion in 2003 from the New College of California while managing the Albany (California) Aquarium. He spent much of 2003 and ’04 in Oaxaca, Mexico, teaching English and exploring Zapotec and Mixtec ruins. Now happily remarried, he lives in the small northern California town of Arcata – “so rural that, when wind blows, I smell the cows” – where he and his wife, Suzanne Courteau, are compiling a book of Oaxacan legends. Through fiction and RPG material Stafford continues to explore Glorantha; he runs The Round Table, a Pendragon forum for his support line; and he maintains a Saturday Night Pendragon playtest blog.

Saving-throw bonuses and commune spells are nice, but this is the heart of wisdom: to take triumphs and tragedies in stride, cope thoughtfully with them all, and be ready for more. Stafford’s .SIG file reads, “Love without reserve, Enjoy without restraint, Live without dead time.” 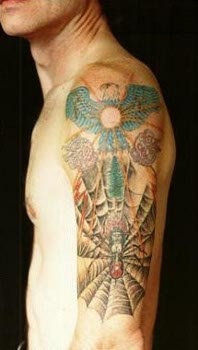 For many years, one of the standing jokes at Chaosium was that every employee had to have at least one tattoo. I facetiously asked Greg to provide an inventory of his current tattoos. He sent a photo, replying that he’d explain it on the condition my editors print his response if they used the photo. I can fairly say it is nothing like anything The Escapist has ever published:

“This, my first tattoo, is a part of my transformative healing work. Transformation is difficult work. If it is not difficult, then it is not transformative; it is just improvement. But shamanism offers a process to interact with the nonexistent, or the nonphysical, and manifest it in the world. I had to reveal the core of my vision into this world in order to make it more real. Not more real for me-it can’t be more than it is. I mean, to make my vision more real for you. I’ll explain as much as I can in print.

“Look below here – this is the web of being. Everywhere two webs meet is something in life, an event or a place or a person or a thought or a dream or voice or vision or pain or terror or realizations that some day we will die. This net, the visible part, is the world of relationships – see how they cast their own shadows?

“And in the center there, that’s the spider woman who came to me in darkness and scared the hell out of me for years. Something horrible happened and she came, and at first she was just another terrible thing. But she kept everything away from me for decades, and at last I learned her language. Sometimes she comes now in a sweat lodge to help healing, sometimes she still guards me. See her head, it’s on fire. That is how to find her – head for the light. She is the center there, where fire and darkness are one. It’s a terrible and horrible place to try to get to – not so bad once you get there.

“But the whole thing there, that is the world of shadows where we live. But that whole world grows too, and you can see that one tree there – that’s me, or you. It takes the energy from below – the great confusion of joy and pleasure and hate and fear and screwing up and love – and that tree takes it all into itself, that tree does, and it brings the power upward from Below, up to the world of the Above. That’s what the tree does.

“And above there is the sky – you see it, blue, up beyond the clouds. An eagle took me there once so I could look down more clearly. You can tell which way the eagle is going by the constellations: the Great Bear and the Hunter. And there is the sun, inside the sky, and inside it is something else. And from it, through the sun, you see, out comes light, bright light that comes out from the One, out from the Above, to warm the clouds and the trees and the world of below. And it streams into the world as sunlight, and lightning, and rain.”

Writer and game designer Allen Varney has written more than 50 articles for The Escapist. See the complete list at The Great Games Experiment, and follow him on Twitter.