Right, where were we before all that Expo business that kept me away last week? GTAV? I think we were talking about GTAV. Not that it will change anything now that it’s sold better than an umbrella stand in autumnal Seattle, but there’s quite a bit that it needs to be firmly called out on. And there’s all the time in the world to make people regret their purchasing decisions, which is half my motivation for this job.

I got the usual bullshit argument that ‘no-one’s playing it for the story,’ which I, in turn, will counter with my own usual bullshit argument that nobody would have said that if the story had been good. And, of course, story is a lot more than just dialogue and cutscenes. I doubt the game would have engaged you so much if you’d been piloting featureless white figurines around a grid of building-sized cubes.

The central problem is characters. Does the GTA universe only have about five characters in total? There’s ‘protagonist man,’ whom Franklin embodies: The straight man who nevertheless lacks the self-awareness to avoid getting sucked into the craziness of those around him. Then there’s ‘vacuous celebrity’, ‘jaded older figure’ and ‘person who acts really inappropriately and has no apparent ability to mentally screen anything that comes out of their mouth’.

Which isn’t as big a problem as the fact that none of the three protagonists you can switch between as part of the main gimmick engage me. Michael the father, Franklin the son or Trevor the holy ghost. And it’s not because they’re simply unlikeable people, although Trevor definitely is. Much has been made about the scene in which we control Trevor as he gleefully performs unflinchingly hideous and realistic acts of torture upon a prisoner while under orders from a government authority (which, like all things in the GTA-verse, is utterly corrupt). And while I did find this scene hard to watch and completely not fun, that’s not really a complaint. Not in this post-Spec Ops: The Line world in which a confrontational scene can be used to deliberately drive a wedge between player and protagonist.

And if that was the intention, it bloody well worked for me, but I don’t think it was, not fully. I’ve heard a lot of other people make the case that Trevor is intended to be a representation of the behaviour an average player shows when set loose in a sandbox game. A depiction that makes sense when he’s being portrayed more as a sort of amoral free-spirited rogue, but not in the moments when he is merely nasty. A player, released in the sandbox and free of consequences, is reckless and whimsical, not cruel. They might kill someone if they’re in the way or because they fly off in a hilarious manner, but prolonged and calculated torture isn’t the same. It’s just not as funny. The protagonist of Saint’s Row IV better represents a sandbox player to my mind, because they have charisma; the satire works because they are an idealized self to match the idealized morals of the sandbox, whereas Trevor is an ugly monster. 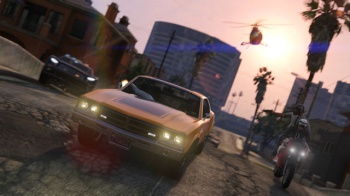 But as I said, being bad people isn’t necessarily the problem with the characters. What could be the problem is that their character arcs do not involve them having to change into better people; if anything, they all seem to be about other people having to accept them for who they are. But then again, changing into better people is kind of a lost cause while the player’s still in control. No, what really makes me dislike the characters is that they’re just not consistent.

Trevor switches back and forth between monster and free-spirited rogue. Relatedly, Michael can’t seem to decide if Trevor is a dangerous threat to him or an old friend with whom he must bury the hatchet. Does Franklin want to escape from the dead end that is ‘tha hood’ and make something of his life, or does he want to stay true to his fellows? And while being conflicted isn’t the same as being inconsistent, there’s still the problem of motivation.

Motivation is central to a protagonist’s character. As long as we, the audience, can in some way share the personal goal of our protagonists, whether it be to strike it rich or watch pedestrians sail hilariously through the air, then engagement can follow. And the question that keeps coming to mind when I think of the protagonists of GTAV is this: What could possibly happen to these characters that could finally make them happy and satisfied with their lives?

Because it seems like Franklin could find something to whine about in a consequence-free life of hedonistic sex with a pile of warmed-up partially-set meringue. Michael’s eventual goal is to strike it rich through crime and then retire happily in luxury, forgetting that this is precisely what he already did, and apparently it didn’t stick. It could be that he wants to reconcile with his family, but I’m not sure why, because they’re a bunch of tossers. Trevor mainly seems to want to expand his criminal operations, and absolutely nothing places more than a momentary barrier in the way of him achieving that, but again, it doesn’t seem to help him clean up.

See, for all the problems GTAIV had, Nico Bellic was not one of them. He was probably in the wrong game for him, but he was a strong character. He starts off as a blank slate, arriving at Liberty City with nothing except the desire to build a new life from absolutely nothing. A clear motivation that all life-forms can sympathize with: the desire to get by. As the game goes on and we learn more about him, we find that he’s trying to fill a hole that goes far deeper; to move on from his old life of poverty and horror to achieve the promised American dream. His tragedy is that he can never truly escape from the darkness of his past, because it’s a part of him, which he carries everywhere he goes.

Niko could carry a game all by himself, but none of the GTA5 bunch can. They can’t even do so through a combined effort, ‘cos three mediocre story arcs do not add up to a good one. It’s like taking three lukewarm showers because you figure that adds up to a hot one, and not a massive water bill and stubby nipples.