They call it “Metroidvania” for a reason; Nearly two decades after their release, Super Metroid and Castlevania: Symphony of the Night are still the definitive examples of the line of 2D adventure platformers their respective franchises founded. Guacamelee! is very much an ode to Metroid, and while it boasts a better understanding of the source material than most games in the genre, a homage is all it tries to be. It could have been much more.

The game’s narrative is traditionally simple. Juan, an agave farmer from the strong and silent school of videogame protagonists, is spurred to action after his childhood friend/love interest (who is literally called “el presidente’s daughter”) is kidnapped by Calaca, a sharply-dressed skeleton intent on the usual undead shenanigans; Evil rituals, world domination, insane laughter, et al. After a brief brush with death, Juan finds himself in possession of a magical luchador mask that gives him mystical lucha libre wrestler powers. He then sets off to suplex his way through deserts, jungles, temples and an army of evil skeletons to retrieve his bogarted love and thwart Calaca’s vaguely-outlined plan for ruling both the worlds of the living and the dead.
If this all sounds a bit like Videogame: The Game, that’s because that’s exactly what it is. Guacamelee’s! unique focus on Mexican culture and myth makes for an interesting backdrop, but the game’s themes and art direction play second fiddle to the meme and gaming references that litter its script and design. The references are fun and affectionate – like the “Mexican-style” billboards for other indie games dotted around the game’s larger city – but when they start cropping up in the narrative they begin to undermine the game’s identity. After some heavy foreshadowing, one of the boss battles ends with a mechanic ripped straight from Mario Bros. It’s funny, largely because of its incongruity, but it’s also an example game going for a cheap “Hey, I get that reference!” gag when it could be establishing its own world and its own jokes.

Guacamelee! is gorgeous, with a brightly-colored, angular art style that runs the gamut from modern Mexican art to the imagery of the Sergio Leone western to the complex, totemic designs of the Mayans, Toltecs and Aztecs. Likewise, a number of the game’s antagonists are pulled directly from Mexican myth, albeit with a humorous twist.

Guacamelee! borrows heavily from its forbearers when it comes to structure. All of the traditional Metroidvania upgrades make an appearance; the double jump, the wall jump, the shrink-to-get-through-tiny-tunnels skill. All are well-executed, and transforming into a chicken is actually more fun than Metroid‘s famous morph ball. More interesting, however, are the skills that serve a purpose both in combat and out of it. The rooster punch, a flaming upper cut that uses slowly regenerating blocks of stamina, is good for cracking heads and destroying red blocks, but it’s also a useful mobility tool, often giving Juan just enough lift to grasp an out of reach ledge. Juan’s roll ability grants him temporary invincibility, complete with a Street Fighter III-esque flash and pause when it deflects damage. It’s certainly handy during combat, but Juan can also use the moment of invincibility to roll through hazards while platforming. 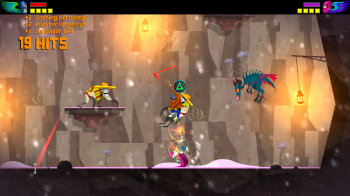 This clever design multi-tasking gives Juan a sizable number of platforming tools, and the game’s intricate level layouts call for precise, inventive use of every skill, in finger-taxing sequences. Eventually, Juan gains the ability to shift between the worlds of the living and the dead at will. This adds another layer of complexity to the platforming, as certain objects and hazards only appear in specific worlds, and you’re frequently expected to change worlds mid-jump. While the game does throw some challenging, trap-laden situations at you, it’s not particularly punishing. Falling during one of these sections will usually send you back to the last ledge you landed on minus a smidgeon of health, and even dying outright rarely sets you back more than a couple of screens. Risk-versus-reward isn’t what drives Guacamelee!‘s gameplay. Instead, it’s about practicing enough to beat one challenge before moving on to the next. The game does require perfection, but only in short bursts, and with the single exception of one secret area, it never becomes frustrating.

The combat is where Guacamelee! starts to really distinguish itself. Juan can throw out a series of light attacks to stun enemies, which lets him grapple and throw them. Punching a skeleton then throwing it into the air to knock out a dragon? Fun. Hurling a skeleton across the room into a pile of midgets and watching the chaos unfold as they go down like bowling pins and give you a 200 hit combo? Game of the Year material. There’s more to the combat than that, however. All of Juan’s moves, including the special moves he unlocks as he progresses through the game, can be chained together or canceled into one another, allowing for some elaborate fighting game-style air combos. While the enemies aren’t particularly aggressive or varied (there are roughly half a dozen flavors of skeleton and a handful of non-skeletal enemies) the game compensates for their deficiencies with clever mechanics. Some enemies can only be damaged in one of the game’s two worlds, while others have color-coded shields that can only be broken with a particular special attack. By the half-way mark you’ll be dodging attacks, shifting worlds and taking down dozens of enemies in beautiful free-form combos. It’s quite telling that one of the game’s most satisfying levels is “La Caverna de Pollo,” a simple arena-like area that throws enemies at Juan en masse.
The game does offer drop-in drop-out co-op, which works right up until the point where the players gain the ability to shift worlds at will. Shifting worlds affects both players, be they mid combo on a dead world enemy, or standing on a living world platform above a pit of boiling lava. The precision required to get one player through some of the more difficult platforming segments is considerable, so tossing in two players with the camera following only one of them and you have a recipe for a fight. The co-op is fun, but save it for your second run.

With Guacamelee!, Drinkbox has demonstrated an understanding of the Metroidvania genre that few developers can match. But while its mechanics are equal to if not better than the games that inspired it, Guacamelee! seems content to live in their shadow. The game is brilliant, but it’s also steeped in a kind of defensive, referential irony that says “don’t take me seriously,” when it should be upping the stakes. Characters frequently break into random memes, boss fights end with out of place game references and the game’s art is obscured by cute, but eventually tiring nods to other games. Guacamelee! is so intent on paying homage to Metroid and a dozen other games that it missed its chance to be better than Metroid. It does, however, come very close.

Recommendation: Guacamelee! makes no bones (har har) about being a game for gamers; It’s mechanically demanding, visually stunning and really damn funny. It’s definitely worth your $15.