I know I usually try to make my Extra Punctuation columns relate in some way to the game I was going on about in last week’s Zero Punctuation, but frankly this time I can’t be arsed. I resent Over Fuse Strike. Whatever, quite enough already of playing the interminable bloody snoozefest, without letting it occupy my headspace a week after the fact as well. I don’t see why I have to keep restricting myself to boundaries that I built in the first place. I mean, Rhymedown Spectacular is ostensibly about videogames, but I did that one about the Sarlacc a few weeks back because I don’t give a shit about your “rules”, man. So fuck it, I’m gonna talk about Gunpoint. The revolution will be televised.

I’ve known about Gunpoint from its earliest online presence because a load of people immediately linked me to it saying “Hey, this solo-developed indie game looks kinda like that solo-developed indie game you made a while back”. Meaning Trilby: The Art of Theft. Since both are 2D pixel-art mission-based stealth platformers in which the main character wears a hat. Well, I’m not about to start crying rip-off just because a game shares a few themes with something I made years ago.

Having said that, I did a little research between writing the first and second paragraph of this article and somehow this slipped me by at first: the game’s by Tom Francis, of PC Gamer UK. A little digging through my email archives confirmed a small nagging memory: he interviewed me once (You can still read it here). Not only do my amateur game development exploits get mentioned, but he also name drops Art of Theft at one point. So maybe Art of Theft was an influence at least after all that, and if it was, I would be very chuffed, because Gunpoint‘s quite good.

But it’s only by surface appearance that a comparison can be drawn, the two games have a distinctly different feel. Gunpoint combines innovative design with a very satisfying feel of movement and organic switching between gameplay styles. Perhaps most importantly it was made in Game Maker, rather than a program primarily designed for the creation of point and click adventure games. You play as Richard Conway, a “freelance spy” who is hired by various parties to embark upon thefts and infiltrations on their behalf. Richard’s status as a freelancer works to the benefit of an increasingly complex story because he is free to do jobs for every person and company involved in the intrigue, with no expectation of loyalty, so he can understand every side of the matter. In theory. In practice, I still didn’t have a firm grasp on what was going on by the end, mainly because most of the plot was dumped on me in between-mission text conversations.

Which is a shame, because the storytelling aspect starts off very strong in the introductory mission, when we are introduced to Conway as he is hurled through a top-floor window. And then, after dusting himself off, a potential client is murdered as he’s making his way up to their office, all taking place within gameplay. After this strong opening it seems like I’m always having to wait until the between-mission text conversations to get an explanation of what I just did and how it’s significant. The visual storytelling doesn’t ramp back up until the very end, when Richard gets the ability to kick down doors and goes on a very cathartic rampage. 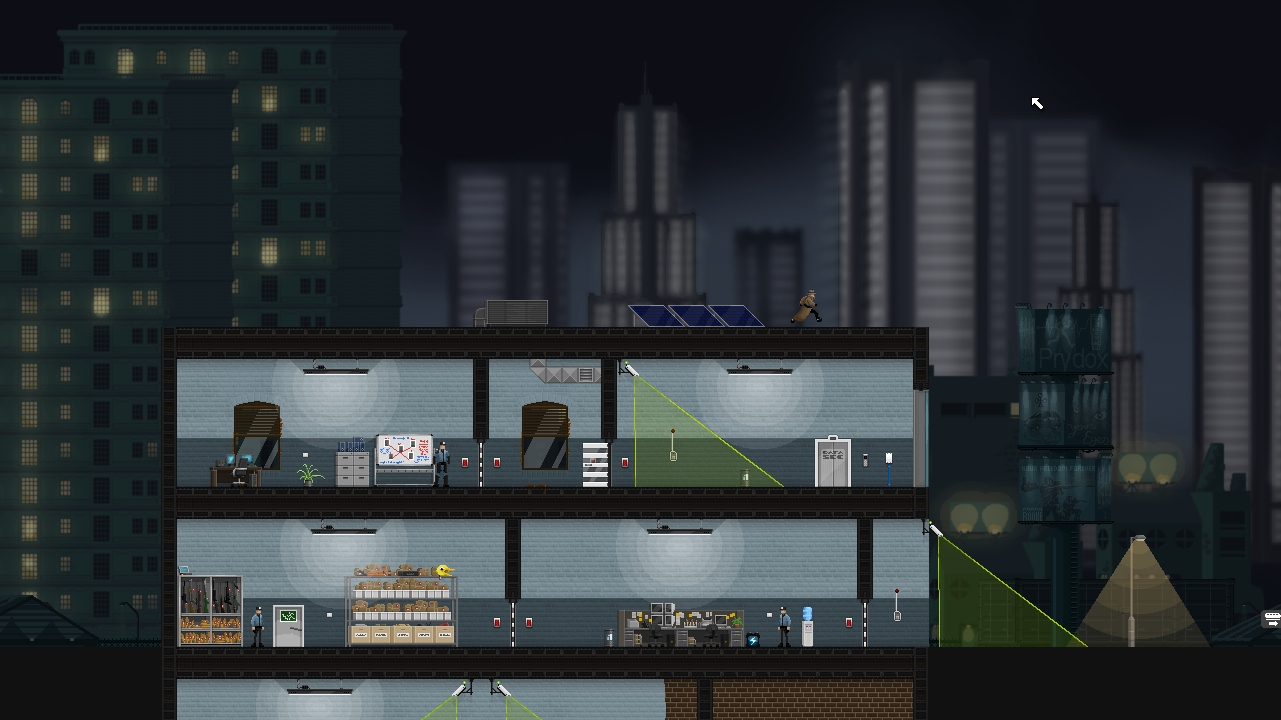 From what I can gather, the initial intention was for the gameplay to reflect the title by being based around pacifying guards by pointing a gun at them. This ends up being kinda slow-paced and dull and is now a largely optional unlockable ability, because frankly embarking upon a tense nervous stand-off as you slowly edge towards the door doesn’t hold the same appeal as performing a jet-propelled rugby-tackle on a guard so that the two of you go flying through a plate-glass window. You know, now that I come to write this all down, this game seems to be a little bit obsessed with people flying through windows. It’s like someone wanted to adapt Watchmen but had only read the first three pages.

What Gunpoint is, is a 2D engine for organically creating spectacular movie-style moments. Not with pre-animated motion-captured stunts, but just by setting up a few basic rules and letting the player do the rest, and that’s something more games should aspire to. You know that standard moment in a film where character A chases character B into a room, but when character A arrives, they find the room empty? And then after they leave, frustrated, the camera pans up to reveal that character B was hiding above the door or on the ceiling all along? That’s one thing you can do. Also, you can rewire the electronics to darken a room remotely, and fatally electrocute a guard who thinks the switch next to him still works the lights. Which is great if the movie moment you specifically want to recreate are from the Home Alone films.

It’s also a game that demonstrates the power of little touches. One thing I really like is how your mission performance is summarized. You’re told how much violence you used, how much noise you made, and how many witnesses you left. The game doesn’t really judge you for what approach you went with, but there are equivalent awards for using all violence and for using no violence. Even if I fuck up the stealth I can still feel like I did a good enough job as long as I take out all the witnesses. I’m also a massive ditherer, and never completed a mission within the par time, but by taking over twice as long as seems to be necessary the game routinely gave me the ‘Thoughtful’ award, which I think is a really nice touch. It doesn’t berate me with D-ranks or harsh red text for being a slowcoach. As long as the job is done any method is valid, right?

On the whole, it’s just a shame there isn’t more of Gunpoint. I got through the campaign in about two hours, and I was left feeling there could have been a few more, bigger levels that explored the freedom of the mechanics better. Quite a few levels lean more towards puzzle-platformy than stealth-platformy, requiring that electrical circuits be unlocked in the correct sequence to get to a destination by the only method available. Which is fine, but having very few really big levels with multiple paths and buildings and sandboxy electronics fun to be had is a missed opportunity. Still, it’s a format that lends itself easily to additional missions and campaigns. There’s a level editor built in, but a level’s not the same without story context. When I tackle a dude through a window and hammer his face into the broken glass on the concrete two stories below, it helps to know they deserve it.