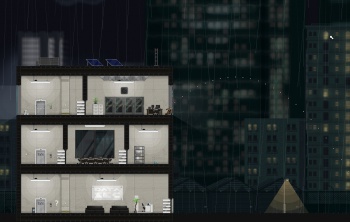 Gunpoint‘s opening, in the spirit of traditional noir stories, begins with a character smashing through a third story window. It also presents us with most of the genre’s familiar archetypes, including a hardboiled private detective, femme fatales, corrupt police, and a dark, rainy world. Gunpoint isn’t a 1950s pulp serial however, it’s a puzzle-platformer set in a future of interconnected electronics and corporate espionage. Creator Suspicious Developments has managed to fit these disparate elements together so naturally that once you’re dropped into the protagonist’s latest mystery you’ll be having too much fun to want to leave.

You play as Richard Conway, a freelance spy who provides his services to ordinary citizens and corporate weapons manufacturers alike. Conway isn’t the most financially successful spy however, barely able to afford his pair of low-grade, projectile jump trousers, or a trenchcoat that conveniently absorbs fall damage. But the night one of his clients is murdered, and Conway is named the prime suspect, he’s assaulted with a deluge of new cases from individuals from all strata of society. Some clients are noble, some are selfish, and some even claim to want Conway exonerated. As you investigate each mystery however, it quickly becomes clear that all of your new cases are somehow connected to your previous client’s murder, and it will take all of your skills to uncover the truth, whether in the name of justice or revenge.

Each mission follows the same formula: You must break into a secure facility, complete an objective (usually accessing a computer terminal,) and then make your way to an exit. There will also be the occasional optional objective, such as avoiding detection, using varying degrees of force, or simply retrieving laptop emails, but those can be followed or ignored to the player’s liking. The real challenge comes not from the objectives themselves, but how you get to them. Each facility not only has varying levels of armed guards, but alarms, motion detectors, and electronically sealed doors that prevent you from reaching restricted areas. That’s where Gunpoint‘s puzzle elements come in. Conway is equipped with a Crosslink, an illegal phone app that lets him hack and rewire various electrical systems. By creating a connection between a light switch and a sealed door, for example, you’ll be able to reach otherwise inaccessible areas with the press of a button. The trick is that you can only connect devices on the same electrical network, and more complex buildings will have multiple networks to deal with, some of which can only be unlocked from deep inside the facility. Individual puzzles tend not to be especially taxing, with the most difficult challenges reserved for optional objectives. Thankfully, even unlocking primary objectives rarely feels boring; Gunpoint treats you like a technological wizard breezing from room to room, with no door capable of stopping you.

While the puzzle mechanics are certainly engaging, most players are more likely to get a visceral thrill from Gunpoint‘s platforming. With a Dropshot trenchcoat that protects you from all fall damage, and special equipment allowing you to climb walls and hang from ceilings, there are a wide range of stealth-oriented options available to you. Do you like sneaking in and out of facilities like a ghost, leaving no trace of your presence? How about systematically dispatching guards one at a time? Setting traps that will be triggered by an NPC’s movements? Dramatically kicking doors off of their hinges, sending them smashing into enemies? Perhaps you’ll even succeed by accident, smashing through a glass floor and letting nearby enemies fall to their deaths. 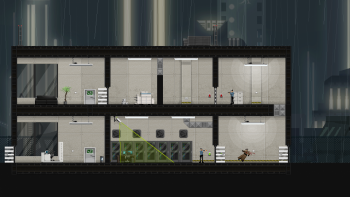 One of the strongest points in Gunpoint‘s favor is that all options are equally valid, rewarding you with badges that reflect your playstyle, as well as equipment upgrades and in-game currency. You can spend this money on additional items, usually gadgets that increase your stealth capabilities, and replay the levels to try a wildly different approach. It’s very satisfying to look back at your badges to see how much of the game you’ve completed without being seen or heard, and it’s effortless to dive back in to grab any badges you’d previously missed.

Gunpoint‘s story, outside of a few unexpected scripted sequences, largely takes the form of between-mission briefings with Conway’s clients. Each briefing is conducted from a distance by secure text messages, while Conway is given various dialogue options to act as responses. These multiple-choice segments create some amusing character interactions, but more importantly, reflect the noir-themed personalities Conway might embody. You can play him as the cool, calculating professional, the slightly bumbling private detective, or the hero with a heart of gold, all within the same story campaign. Then there’s the clients themselves, few of which seem to have your best interests at heart. Each character you interact with has some connection to the central plot’s murder, so taking on their cases while their motivations are a mystery adds quite a bit of dramatic tension. Conway also has the option of lying to clients about his discoveries, usually if what he finds seems to implicate him in a crime. That’s not to say the story sequences are especially deep; your briefings won’t directly impact gameplay, except for a single branching path that alters Gunpoint‘s final mission. Regardless, the tone of the briefings matches the noir aesthetic so well that they’re worth reading for at least a playthrough or two, while those who prefer gameplay can skip the story entirely.

When it comes to faults, Gunpoint doesn’t have any mechanical ones to speak of. Its controls and mechanics are easy to grasp, the difficulty is well-balanced, and the platforming, stealth, and puzzle elements all fit together nicely. Any key issues one has with the game will probably be ones of subjective taste instead of objective criticism. Conway can be killed in a single shot, but frequent, optional autosaves prevent that from being a burden. The campaign is only three hours long, but that’s only a problem when you don’t want to stop. (A robust level editor also allows for the possibility of additional, third-party content.) Some advanced equipment mechanics are tricky to grasp at first, but you won’t need them all to complete the game, and there are tutorial missions to practice with. Even if you hate puzzles, the game’s hardest challenges are reserved for secondary quests, so you can still breeze through the game’s platforming elements in an afternoon. Gunpoint provides enough varied gameplay options that fans of all its genres will find something to love, and hopefully gain an appreciation for new mechanics in the process.

Bottom Line: Gunpoint is a short, well-crafted title that combines film noir, stealth, and hacking puzzles into a incredibly fun gaming experience. No one mechanic or playstyle takes precedence over the others, but all are equally balanced and fun to play around with.

Recommendation: If you’re a fan of any of the aforementioned genres, this game deserves your immediate attention.