Developed by Creative Assembly. Published by Microsoft. Released on February 21. Available on Xbox One and PC (reviewed). Review copy provided by publisher.

When it comes to Console vs. PC, the biggest debate is most often about the control schemes: keyboard and mouse vs. gamepad. In some genres, the gamepad wins out. Fighting games, driving games, and platformers perform amicably on consoles. Other games, such as shooters and strategy games, are much better with a mouse. You can shoehorn turn-based strategy games onto a console, but the RTS has long eluded the platform, simply due to its complexity and speed. Which is why it’s so perplexing that Halo Wars, the Halo RTS spin-off, was exclusive to the Xbox 360. Finally, with Halo Wars 2 being released on the PC, we have the series on the platform it’s supposed to be on, but did anyone really ask for it?

Halo Wars 2 is another “Play Anywhere” title, which means that buying a copy on Xbox One gives you a free copy on Windows 10, and vice-versa. Just like with Gears of War 4, the Windows 10 port is practically flawless. In my playthrough, I didn’t encounter any issues with my hardware, and the only signs of “console port-itis” that I encountered were the terrible keybindings and keybinding menu. So while you can play Halo Wars 2 on your Xbox, if you have a PC capable of running it, it’s a no-brainer. 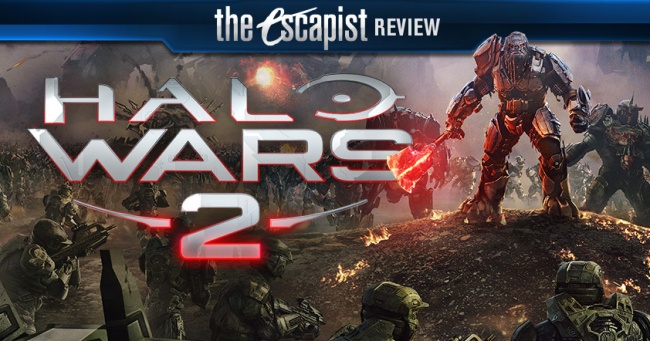 The story of Halo Wars 2 picks up some time after the first Halo Wars, putting you in charge of Captain James Cutter and his warship, the Spirit of Fire. Set after the events of Halo 5, when Master Chief has finally dealt with the Covenant, a new enemy, The Banished, has arrisen. Long story short, they are led by a Brute named Atriax, who was sick of his people being used as cannon fodder by the Covenant and splintered off into his own rag-tag mercenary force. You’ll spend the majority of the campaign tracking down Atriax and his goonies, as they fight for control of The Ark: the gigantic forerunnner installation that creates the eponymous Halo rings. Oh and it also does do that rather annoying Halo thing of ending the game on an ambiguous cliffhanger.

The campaign is fairly short at just 12 missions, introducing players slowly to the game’s RTS engine. Microsoft and Halo stewards 343 have worked with RTS legend and Total War developer Creative Assembly to create something that is a true call-back to the old days of the genre. While most RTS these days have morphed into the new MOBA genre, or at least have incorporated a spattering of MOBA elements, Halo Wars 2 brings back traditional RTS basics: base building, army training, and resource management.

Halo Wars 2 feels like a game released in the wrong time. Long after the likes of WarCraft, Command and Conquer and Dawn of War revolutionized real-time strategy games, it’s so extremely strange that the Halo RTS spin-off is the last true bastion of the genre. If you’ve ever played any of these RTS classics, Halo Wars 2 will feel so strangely familiar to you.

But the game isn’t just banking on that nostalgia – it’s actually extremely solid. You have the same rock-paper-scissors machine that grinds behind every RTS, with infantry beating air, air beating vehicles, and vehicles beating infantry. You have a pretty solid resource management and army upgrade tools at your disposal, and you even have some “hero powers” that can be upgraded as you progress through the campaign. It’s evolutionary, rather than anything radically different, but there’s nothing wrong with that, especially in a gaming landscape so devoid of traditional base-building RTSs.

The problem with playing a console-designed RTS on the PC is that it makes things almost comically easy. I feel like the game’s difficulty was set with the expectation that you’d be using a clunky controller, rather than an ultra-precise mouse. This allowed me to blaze through the game’s campaign fairly quickly, and not really be challenged by the AI in Skirmish until setting it pretty high.

Once you’re done with that, Halo Wars 2 offers up several multiplayer modes, including the new card-based “Blitz” mode. In a blatant effort to cram some luck-based microtransactions into the game, in Blitz you “equip” a set of cards, obtained randomly through “card packs”, that determines your army strength. You’ll get a bunch of free card packs just by playing the game, but if you want to be competitive you’ll likely have to shell out some dosh.

I didn’t get too much hands-on time with the other multiplayer modes, as the multiplayer wasn’t open during the review period, but with the exception of Strongholds, which is a kind of arcade-y fast-paced version of the game where you start off with a fully-built base and a bunch of resources, it’s mostly what you’d expect. You can choose to play as either The Banished or the UNSC, with a selection of different leaders for each faction having some exclusive units and hero powers. In Domination, you fight for map control, while Deathmatch is the ultra-traditional RTS mode of “kill all of your opponent’s mans”.

Bottom Line: Halo Wars 2 is the sequel that no-one really asked for, but is a surprisingly solid traditional base-building RTS, and is finally on a platform suited for the genre. The campaign is a little lacking, but several different multiplayer modes and the promise of “six months of regular updates” make up for it.

Recommendation: If you yearn for the days of zerg rushes, collecting Tiberium, and zug zug, then Halo Wars 2 is strangely enough the last bastion of the old-school RTS. Buy it for the nostalgia, if nothing else.