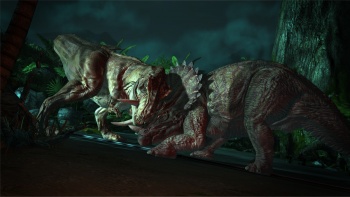 As part of Telltale’s presentation announcing the Jurassic Park game, I got to sit down and freely play through a sequence. So putting on the headphones to drown out the bad techno music and game journalist chatter, I picked up the Xbox controller and traveled to an island I hadn’t visited for many years. Thankfully, John Williams’ signature theme was there to guide the way. Duh-na-neh na na…

Dr. Gerry Harding and his teenage daughter Ness are in one of the jeeps emblazoned with the familiar Jurassic Park logo. In the backseat is a Spanish-speaking woman who is badly injured and Harding, the veterinarian briefly seen in the opening act of the film, is treating her wounds and wondering where the poisonous reaction is coming from. Ness stops the car because a young triceratops is blocking the way and the player, as Gerry Harding, gets out of the car to coax her back into her enclosure.

Using the analog sticks, you can look around and objects of note are highlighted with large representations of buttons on the controller. For example, by pressing X, you look at the gate and realize that it’s stuck in the open position. Movement isn’t controlled by the stick though, but instead you can change the focus of the scene by pressing the thumbpad. Knowing that the nearby work shed contains the manual override for the gate, Harding moves over there.

The dialogue feels natural and unforced. By pressing the right trigger, a conversation wheel pops up similar to Mass Effect. Your daughter asks what’s in the shed, to which you reply tools such as snow shovels. “What for?” she asks. “Well, it’s not for shoveling snow.” “Ew.” It seems Telltale is not above a poop joke even in this supposedly serious game.

Uh oh, there’s a keypad on the work shed door and Harding remarks that there’s a codebook in the car. Clever adventure game players will realize that dialogue is a not-so-subtle clue for you to ask Ness to check the book. Once you ask her, the focus of the scene shifts to Ness in the car and you can again press certain buttons to A) honk the horn Y) flick the headlights or R3) check the glove box for the code.

Back to Harding, and he presses in the code and enters the shed. Turning the manual release lever is combination of holding a button and circling the right analog stick. Back outside, Harding manages to get the gate mostly closed before he notices that a big triceratops alpha has appeared, and has to rush to close the gate as it charges him. That means tapping the A button as fast as you can.

That particular task is set to fail, and the triceratops smashes the gate on top of Harding. But that’s not the real problem as the telltale (heh) signs of impending doom begin in that instant. Boom. Boom. Boom. If there was a glass of water in the car, oh man, there would be ripples all over the place. That’s right… Tyrannosaurus Rex.

The big carnivore rushes towards the triceratops and the two monsters clash. Harding has to quickly get out from under the gate. There follows a frenetic sequence of Harding and Ness dodging the fighting monsters after one of them smashes up the jeep. All of mini-tasks require quick responses to the buttons flashing on the screen. Need to dodge a biting T Rex? Move the left stick. Need to run carrying the wounded Spaniard? Press Y until the bar fills up. If you fail at any of these tasks, you are punished (or rewarded depending on your masochism) by a death animation of the dinos eating Harding up or Ness being flung against a tree. The glee that Telltale designers felt in these sequences was readily apparent, even before I heard many of them cry, “This death is my favorite!”

Jurassic Park is definitely heavily inspired by Heavy Rain but I must say that it doesn’t feel like a rehash. The story has much to do with it, as the adventure of Jurassic Park is full of tension and action more than the brooding cop story of Quantic Dream’s game. The problem-solving also feels natural and less concerned with collecting random inventory items. I never once felt like I needed a hint or needed to look up a solution like I’ve had to do with previous Telltale Games. The logic of moving a triceratops by throwing its food back into the pen was all I needed.

Jurassic Park‘s first episode comes out in April 2011 on the PC, but it definitely should be played with a controller. The mouse and keyboard will work, I’m sure, but it seems designed specifically with the button pressing in mind. Telltale is busy working on getting the game on as many platforms as possible and here’s hoping that Microsoft allows them to sell it on Xbox Live Arcade soon.