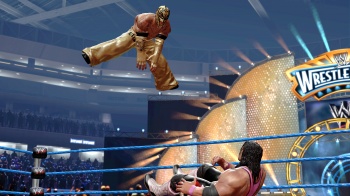 I’m really not a pro wrestling kind of guy, to be honest. My exposure to it was back when I was younger, in the days of the Rock ‘n’ Sock Connection, when my friend and his brother constantly emulated the Hardy Boyz and practiced their chokeslams out on their backyard trampoline. I played the old Wrestlemania and Smackdown games at friends’ houses, and never really enjoyed them too much. How do I do a suplex? Where did he just get the folding chair he just smashed over my head? Dammit, I got pinned and don’t understand why.

And yet, I found THQ’s WWE All-Stars surprisingly enjoyable. It’s the strange sort of game that’s targeted both at hardcore fans of pro wrestling – a love letter to the great stars of past and present – and at people who’ve never played a wrestling game in their life, much like how you don’t need to play football or basketball to appreciate NFL Blitz or NBA Jam. (Fittingly enough, senior designer David Friedland had previously worked on Blitz: The League, and creative director Sal Divida was involved with both NBA Jam and NFL Blitz).

WWE All-Stars is a colorful, cartoonish, over-the-top take on the universe and history of the WWE (formerly the WWF before those jerks at the World Wildlife Foundation got all snooty about things), pitting former legends like Randy Savage, Ricky Steamboat, The Rock and Andre the Giant against modern-day stars like Sheamus, Kofi Kingston, John Cena and The Big Show. From the time-warping premise onwards, the game cheerfully tosses all pretense at realism out the window in favor of a more action-game bent. “We’ve taken some liberties with the rules,” explained THQ’s Sal Divida at a press event – the desire was to have a fast, twitch-based game that “kept the action rolling,” and one that didn’t spend a lot of time with characters grappling on the ground.

With All-Stars, the team at THQ San Diego has tried to mash up a pro wrestling game with a traditional fighter. The core of the game’s combat revolves around strikes and grabs, with light and strong versions of both mapped to the controller’s face buttons. The standard “strikes > grabs > blocks > strikes” rock-paper-scissors of fighting games is in place: Strikes can be chained into each other for branching combos, but can be easily blocked. Grabs are unblockable, but will lose out to strikes – and though the timing is tight, almost every single grab can be reversed (as can the reversals themselves).

Characters have a depleting health bar that makes it easy to tell at a glance which one is ahead, but you can pummel and grapple with your opponent all day and the match won’t end – you can only claim victory by getting a pin (which is much easier if your foe’s life is critical) or hitting them with a instant-K.O.-inducing finishing move when they’re at low health. THQ San Diego has also taken a cue from classic fighters with the presence of what is effectively a “super meter” like you’d see in the likes of Street Fighter or BlazBlue. Players will build energy as they battle – varying one’s tactics and techniques will help fill your meter more quickly, as individual moves will generate less energy the more times they’re used – and can expend a third of the power meter to unleash one of their character’s signature moves.

These signature moves are, appropriately enough, the highlights of a match – and fit well with All-Stars‘ over-the-top nature. The moves themselves are exaggerated (jumping fifteen feet in the air while carrying a 450lb heavyweight bruiser? No problem!), and executed in Matrix-style bullet time, with every movement accompanied by a trail of color. The colors stand out all the more against the suddenly-grayed-out background, and mat impacts are accompanied by slow-mo ripple effects. Even if it weren’t for the fact that they’re powerful moves that do a ton of damage, I still found myself trying to use them as much as possible for the sheer entertainment of the spectacle. 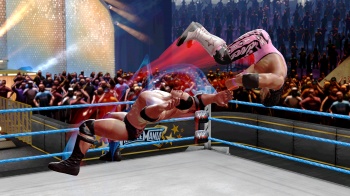 All-Stars actually uses color fairly well to communicate information to the player quickly. If a character suddenly looks gray-ish and is surrounded by a faint red outline, they’re incapacitated on the ground and can be pinned, grabbed, or hit – and that’s a perfect time to climb up to the top rope for a finisher. If one of the fighter’s limbs suddenly sparks yellow, the character is charging a power attack (so get ready to counter, or get the hell away) – and if they glow with a golden aura, then they’ve initiated the first phase of their finisher. The added splashes of color fit well with the game’s exaggerated style, and manage to provide important contextual clues in the thick of a brawl.

The fighters in All-Stars‘ roster are divided into four categories: Acrobat, Big Man, Brawler, and Grappler. Acrobats, like luchador-styled Rey Mysterio, Kofi Kingston or legend Ricky “the Dragon” Steamboat are nimble fighters, about high-flying aerial moves that spring off of the ropes, the turnbuckles, or even the opponents themselves. On the other end of the scale are the Big Men, like Andre the Giant or The Big Show – they’re slow and powerful, requiring technique (or another big guy) to bring them to the ground. Worthy of note is that one of Andre’s moves – putting the opponent on his back and ramming back against the turnbuckle – allows you to re-enact that one scene of his in The Princess Bride, sans Cary Elwes.

The Dublin-born Sheamus was given as an example of a Brawler, a character whose power is in striking attacks, combo chains. Unlike fellow Brawlers John Cena and The Rock, he was described as more of “a brute,” with the ability to unleash surprise power attacks and juggle his foes. However, when up against the Grappler Bret Hart, he ended up in submission hold after submission hold – Grapplers are the technicians of the bunch, able to chain grabs and holds together with the right timing. Both submission holds and pins can be escaped by mashing away on your controller, but the aggressor can make things more difficult on the defender – their own mashing extends the size of the bar that the beleaguered fighter needs to fill in order to escape. In that way, the developers hope to make even the minigames within a match competitive battles.

I ended up favoring the agile Acrobats and powerful Brawlers myself, though play styles were clearly different from character to character even within the same class – despite being a Brawler, John Cena had a Grappler bent that made him more difficult for me to get a handle on than the combo-oriented Sheamus. Friedland affirmed that even in the game’s exaggerated manner, the developers tried to be as faithful to the wrestlers’ real-life styles as was possible – and that wrestling fans would appreciate seeing abilities and moves that spanned entire careers.

He compared the colorful Rey Mysterio to the classic Ricky Steamboat – both are considered Acrobats, but whereas Mysterio has a fancy, high-flying luchador style, Steamboat’s move set is “a lot more martial-arts based. [There are] a lot of big air moves off the turnbuckle but maybe not as much of the flips and twists. So even within each character class you’re going to see a lot of differences.” The mighty Big Show agreed that it was accurate to how people fought in the ring, comparing his real-world bouts with Kofi Kingston to the ones in the game. “You need to keep Kofi’s shoes on the ground. If you let him get in the air, you’re done.” Then again, his difficulties could have something to do with the controller being too small for his 7’1″ frame.

Friedland says the game is in polish mode right now, and it still obviously needs a bit of tweaking, particularly in my chosen Acrobat class: a few countered jumps off the turnbuckle resulted in animation glitches where my target would suddenly grab me in midair and reverse the attack, only they would be holding on to thin air, and my character model was floating over on the other side of the ring. The timing on the reversals was also very tricky to pin down without pre-memorizing all of the moments when you could escape.

Even so, it was a surprisingly enjoyable turn, with a premise that wrestling fans should adore, and an easily picked-up combat system that’s intentionally accessible to everybody who doesn’t know a Rock Bottom from a Stone Cold Stunner. “I think what [non-WWE fans will] get out of [WWE All-Stars] is a really fast-paced, fun, visually exciting, competitive combat wrestling game that they can play,” says Friedland.

So far, he could well be right.