Thank you once again to my ever-diligent correspondents for pointing out that Resistance 1, back in the dawn of time, did have the non-regenerating health and weapon loadout that Resistance 3 has. Resistance 2 didn’t, though, it had the less encouraging health regen limited weapons bollocks, and that’s the point, it’s gratifying to see trends swing back towards my lonely corner of the playground.

I’m unusually encouraged for gaming right now. I know that even as I speak five hundred generic shooters wait to take their bows upon an already crowded stage, but it’s nice to see that so many of them are third instalments. The mainstream industry tends to set up franchises as trilogies, which means they’re all getting wrapped up this year and we can look forward to a fresh new round of IP for Christmas 2012 (assuming the world hasn’t ended). The three-strikes-and-out rule doesn’t apply to older franchises with the name recognition to keep chugging along, obviously, but I’m tentatively certain that they’re not going to reboot Gears of War any time soon.

Speaking of which, Space Marine. And also thanks to my other diligent correspondents who have been diligently demanding to know when I’m going to do one of my little yellow five minute spittlefests for the new Warhammer 40K-branded title. In many ways it’s fitting that such a legendarily dense period for shooters as Shooter Season 2011 should finally include an official appearance from what has long been the mascot of the current generation shooter, the Space Marine.

I have picked it up and been playing it on and off, largely because I know a couple of people who were working on it back when it was in the hands of THQ Studios Australia. On my professional spectrum it’s currently occupying the same general area Red Faction Armageddon occupied for a while; something to review if a slow period comes up, maybe, but currently remaining in a holding pattern while there are still other, more interesting titles coming out. I did try to play a bit more of it after finishing Gears of War 3, but every time I reloaded I found myself unconsciously trying to do the Gears of War timed reload thing, which I decided wasn’t a good sign. I’m not so starved for releases that I’m going to risk harping on chunky gits wearing dishwashers twice within the same small expanse of time.

But I’m going to do something I’ll probably regret later and review what I’ve seen of Space Marine now, effectively cutting off any future possibility of me being able to fill an otherwise empty week somewhere down the line. Because I know Warhammer 40K has a lot of fans. Which has never been any kind of mark of quality in my mind, but it apparently enriched the childhoods and young adulthoods of many internet users. Not mine. Good lord no. I was an Advanced Dungeons & Dragons kid, you know, all the fantasy stuff that stimulated the creative mind that was actually about telling interesting stories with positive outcomes. Warhammer 40K always seemed to me like some massively overdesigned elaboration of chess with an incredibly depressing setting. Which existed primarily to remove all the money from your bank account and replace it with plastic figurines. But you could paint them! For days on end! That’s what we like! It’s all the fun of a coloring book without having to be associated with five-year-olds!

I thought I was a cynical child, that’s why I spent so much time in imaginary fantasy worlds where life was fun and adventurous and I didn’t have to write essays for school. I couldn’t imagine how many levels of cynicism you’d need to be operating on to want to spend your escapist fantasies in a universe that has been completely fucked over by twats. It just seems like such a juvenile concept, like it was pitched by a thirteen-year-old boy while hopping up and down on an examination table waiting for a doctor to grimly fill a large, ominous-looking syringe. 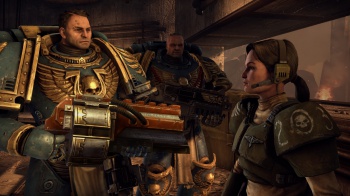 You know what Warhammer 40K is? It’s the product of a generation that has never known any kind of real conflict or struggle. No-one in the trenches of the Somme would pass their time imagining something even worse. No-one talks about the “glory of battle” when they’re trying to sleep through a shelling raid with a bad case of trench foot. But that’s the whole “Space Marine” thing, from what I can gather, a bunch of people who’ve based this mad space religion on how many twats they’ve chainsawed in half. Also they’re FIFTEEN FEET TALL and weigh like a TON and they have ROBOT LEGS and CHAINSAW SWORDS and they FIGHT ORKS ALL DAY NNNGH MORE RITALIN PLEASE NURSE!

Now, I’m sure Warhammer 40K is a lovely tabletop strategy game. It’s not my bag, I was and still am into storytelling play rather than win/lose wargaming, but I’m sure it means a lot to you. I just get a bad taste in my mouth when anyone starts talking about the backstory or setting. Because it’s dumb as hell. Right from the word go: “In the grim darkness of the far future, there is only war,” it declares. There can’t “only” be war, don’t be stupid. People would have to stop and go to the lavatory at some point. And I’ve said before that no authority would seriously pursue a supersoldier project when it’s infinitely cheaper and more practical to just put normal people in vehicles or powered armor who could then get out of the vehicle or powered armor and go study to become an accountant or something. This is why no one wrote up a detailed backstory explaining why the little horse-shaped piece moves two squares forward and one to the side.

I guess it just annoys me that the retarded and thuggish Space Marine concept has had such an influence on shooters of today, both directly and indirectly. As for the Space Marine game itself, yeah, it’s Gears of War. You plod about on your big chunky teddy bear feet getting brown in your face, and none of the main characters display any emotion whatsoever. Usually you can rely on these kinds of protagonists to exist in a permanent state of generic rage, but these guys can’t even emote on that level, they’re just lampshades mounted to the tops of upended Volkswagen Beetles. And the writing’s as witless as you might expect. At one point the boy’s club happens upon an outpost commander who has been talked up by other characters for a while and discovers that she’s an attractive young lady. “Oh god, you chunky fucks are going to be taken aback by this, aren’t you,” I predicted. And sure enough, they were, in the least emotional possible way.

It’s kind of interesting how you can only heal up damage from doing special melee finishers on enemies, but half the time the enemies aren’t melee-based and will just shoot your fat arse, and the other half of the time there are so many melee enemies clustered together that it’s impossible to set them up for finishing moves without taking a few hits on the flank, which are precisely what you don’t need at that point. On the whole, not terrible enough to despise, nowhere near good enough to recommend. Just boring. My least favorite kind of game.

And people give it a free ride ‘cos it’s finally a space marine game with the original, trademarked, capital-S Space Marines. But being the first to do something doesn’t necessarily make you good at it. I could be the first person to peel off a child’s face, roll it into a tube and work it into my cockhole, but no-one’s going to call me the standard by which all future supply teachers should be judged.